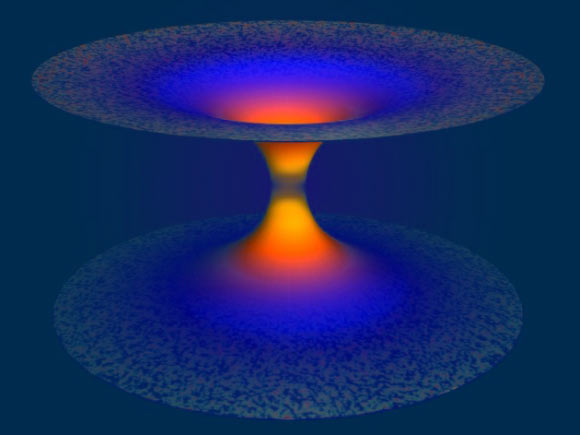 An artist’s depiction of loop quantum gravity effects in a black hole. The bottom half of the image depicts the black hole which, according to general relativity, traps everything including light. Loop quantum gravity overcomes this tremendous pull and liberates everything shown in the top half of image, thus solving the fundamental problem of black hole singularity. Image credit: A. Corichi & J.P. Ruiz.
Black holes are mysterious objects with an outer edge called an event horizon , which traps everything including light.
Einstein’s theory of general relativity predicted that once an object falls inside an event horizon, it ends up at the center of the black hole called a singularity where it is completely crushed.
At this point of singularity, gravitational attraction is infinite and all known laws of physics break down including Einstein’s theory.
Theoretical physicists have been questioning if singularities really exist through complex mathematical equations over the past several decades with little success until now.
“The best theory of gravity that we have today is general relativity, but it has limitations,” said Professor Abhay Ashtekar , director of the Penn State Institute for Gravitation and the Cosmos.
“For example, general relativity predicts that there are places in the Universe where gravity becomes infinite and space-time simply ends. We refer to these places as singularities. But even Einstein agreed that this limitation of general relativity results from the fact that it ignores quantum mechanics.”
Professor Ashtekar and his colleagues, Louisiana State University’s Professor Parampreet Singh and Penn State’s Dr. Javier Olmedo , developed new mathematical equations that describe black holes in loop quantum gravity and show that black hole singularity does not exist.
“In Einstein’s theory, space-time is a fabric that can be divided as small as we want. This is essentially the cause of the singularity where the gravitational field becomes infinite,” Professor Singh said.
“In loop quantum gravity, the fabric of space-time has a tile-like structure, which cannot be divided beyond the smallest tile. We have shown that this is the case inside black holes and therefore there is no singularity.”
Instead of singularity, loop quantum gravity predicts a funnel to another branch of the space-time.
“These tile-like units of geometry — called quantum excitations — which resolve the singularity problem are orders of magnitude smaller than we can detect with today’s technology, but we have precise mathematical equations that predict their behavior,” Professor Ashtekar said.
_____
Abhay Ashtekar et al. 2018. Quantum Transfiguration of Kruskal Black Holes. Phys. Rev. Lett 121 (24); doi: 10.1103/PhysRevLett.121.241301
Abhay Ashtekar et al. 2018. Quantum Extension of the Kruskal Spacetime. Phys. Rev. D 98 (12); doi: 10.1103/PhysRevD.98.126003