OUT OF MIND » THE INSANITY OF REALITY » GOVERNMENTS & THE NEW WORLD ORDER » Do Solar Storms Send Energy Beams Down to Blow Up Transformers?

Do Solar Storms Send Energy Beams Down to Blow Up Transformers? 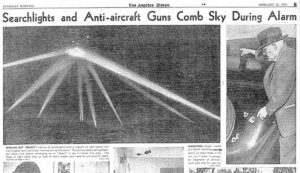 Front of Los Angeles Times, 1942 when military battled a space craft
There is much talk about the “transformer explosions” in New York and Louisiana. Witness video shows us beams of light in the sky and shining straight down where the explosions and electrical anomalies occurred. It was like a war zone, and it didn’t look accidental.
The fellow who took the video of the Kenner activity was two blocks away and he said he heard the same sound that night that he’d heard once before when a UFO was nearby.
Richie from Boston shows us the footage and the technology from his perspective. He also shows us the government (deep state) document telling us to prepare for a 6-month power outage. It was released in December 2018. This month. The psychopaths warn us about things and then they do it. It’s their code of ethics. They have to tell us what they’re planning, in advance. How often have they used the Simpsons cartoons? They think it’s funny. Do you?

Some believe it was a “solar storm” that caused these violent “anomalies” and Internet and 911 outages.
Lionel did a second video giving 5 Reasons the government would lie about an attack. He discusses UFOs and aliens, while I wouldn’t be so sure it’s aliens.
The Nazi SSp (secret space program) people have back-engineered alien technology and are the ones who have not wanted disclosure. They tried to negotiate 50 years before full disclosure of the extraterrestrials and their breakaway civilization would be revealed to the public—just long enough for the culprits to no longer be culpable. That ain’t gonna happen. We will have our full disclosure much sooner than that and they will pay for their selfish, inhuman actions.
Was it a solar storm that hit those transformers, fried the lines and ignited buildings from the inside? Was it a solar storm that blew up houses and burned them from the inside out and melted cars and metals in California; that burned half a house and left the rest without a scratch?
Since few in any official capacity will come forward to validate what we’re seeing and tell us the truth, we will be left to our own wits to look at all the evidence for an informed opinion.
The people who took the video in New York and Kenner, LA know what they saw, and told us and showed as clearly as they could what they experienced. It would be great if we could believe the statements from the NYPD and the power company but we’ve learned we simply cannot. They have agendas. We’re really sick of the lies.
The video footage we have seen of the “transformer” situations didn’t resemble the Aurora Borealis. It didn’t resemble previous transformer explosion footage. Could it be related to the positive waves of energy washing over the planet for our benefit? Could it be related to Earth changes? The more video you see, the more questions might arise—and I am no video analyst with the technical skills to debunk what is presented.
As for the CenturyLink outage, I suppose it could have been an issue with their satellite(s) in a solar storm, but since there is an investigation, it suggests it might have been more. They were not interested in finding a resolution to our ongoing telephone problems so we cancelled our phone service with them.
The problems began a few years ago when the former CEO, I believe, refused to allow the cabal to access users’ accounts and compromise their data and privacy. Soon thereafter he was not only removed, but tossed in jail, I heard, for refusing to cooperate. Officially it was some other reason, of course. That’s how they roll. Intimidation and prosecution in their corrupt Law-of-the-Sea courts while they install someone more “agreeable”. (corrupt)
So to say I have my doubts about the innocence of CenturyLink in the recent outage would be accurate, but Verizon was also affected, so once again we don’t have a definitive answer on anything. All we have is our intuition.
I don’t give credence to the guy who claims it was a solar storm as he had his subscribers attack Dutchsinse several years ago and had YouTube shut down the channel for no good reason. It was a blatant attack. Therefore I will not share his video. Some research revealed who the attacker’s father is and it didn’t paint a positive picture. He’s also promoting massive catastrophic events on our planet because it’s a “cycle”. That cycle is over, but maybe it’s good for views. We are on a positive timeline now, and Earth isn’t going away.
There are definitely shills out there determined to convince us we are all doomed from various catastrophic events including the seas rising, tsunamis, volcanoes obscuring the skies with black soot that would prevent the sun from shining on Earth, killing nearly all life, or massive asteroids that will strike the planet and fragment it into oblivion. The UFO threat might be the most sensible in light of all that nonsense. Perhaps it was the same satellite weaponry used to incinerate Paradise, California.
Tyler at Secureteam weighed in on this in his own video.

When the transformer footage first presented I posed the question as to whether it could be a foiled fake alien invasion. Or, is it the prelude to a planned invasion? Are they setting the stage? They’ve always wanted to do it and it’s probably the last card they have to play. Ask Carol Rosin.
Richie from Boston just uploaded this video today. Our best defense against a fake alien invasion scenario is to alert as many as possible that it is a potential plot and not to fall for it. It would be just one more deep state false flag attack.

The simple fact seems to be that Earth is a jewel in a Petri dish and many extraterrestrial races have a distinct interest in it—and us—for many reasons. The potential “natural” threats were remedied or mitigated as much as possible, including righting the planet on her axis, we’re told.
Why would any group go to such trouble if they were going to want front row seats for our ultimate demise? Why would the Universal Protection Unit (UPU) (see video below) bother with enforcing the Peace Treaty (Universal—not International) if we are all doomed to perish?
There was a time when all hope for rectifying the situation on Earth was almost abandoned—but a very few people worked hard to turn things around and we are now protected—to a great degree. We showed we are worth preserving rather than erasing the board and starting over as happened with previous civilizations here that fell into the depths of evil and were removed.
Are our problems over? No, but we will hopefully soon have the leadership we deserve and can learn the truth about what has been transpiring on our planet and at whose hands.
In the mean time, do your own research, knowing that probably 90 percent of the Truth Community comprises shills, disinfo agents and cointelpro, all vying for your mind.

Before you decide this is all mindfuggery,  you may wish to listen to the exchange with members of the Universal Protection Unit—who are not Human and don’t speak a language we understand. There were a couple of translators for this recorded event, and since that time we are now very pleased that there is a Human representative from Earth on the council. We are tired of others making decisions for us when they are not Human, have never lived under the circumstances we do, don’t understand Humans, our emotions, our challenges, our desires. You may have difficulty believing this exchange happened as presented, and that is your challenge; to seek truth. It was mindblowing, from my perspective, but in the back of my mind I did question the validity and if it were even possible. Since then I have accepted it for what it appeared to be.  ~ BP

OUT OF MIND » THE INSANITY OF REALITY » GOVERNMENTS & THE NEW WORLD ORDER » Do Solar Storms Send Energy Beams Down to Blow Up Transformers?