Who Were The Neoliths? 3rd Lost Civilisation Discovered? 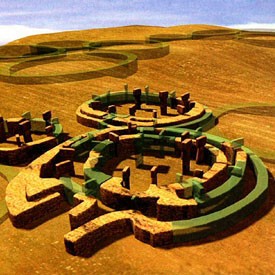 Narration By Don Moffit: www.DonMoffit.com
Who were the Neoliths? Yet there was another civilisation, also practicing masonry techniques, which utilised the lifting and placement of stones many tons in weight, which we know in modern day history as the Neolithics, yet who were these enigmatic people? It should be clear to all who have watched our previous content, that the intimate knowledge they had of astronomical precessions, along with their astonishing capabilities of solar alignments, in addition to the size of the stones they used in their building of these structures, demonstrates that they were far from that of a primitive people. The evidence of their knowledge, with building methods still not deciphered, is clearly undeniable evidence, that they were far more advanced than academics claim. And although their ruins may now appear primitive, this many in all possibility, be due to their tremendous age. These undeniabilities, along with our in-depth study of their intentions, which are better understood and deciphered as every day goes by, is the main reason why I am disliked by an academia, who not only have no answers to the evidence I present, but are also by default systematically being humiliated. My accusation is that mainstream archaeology, along with academic institutes, particularly those teaching our children, attest to particular groups being responsible for such ruins, yet we accuse them of fallacy, and with good reasoning, not only due to the civilisations they are teaching children who were responsible, were simply incapable, but when these young, free thinking adults, are confronted with such tales after watching my content, are armed with information which not only proves that such claims are lies, but when they challenge their teachers and academics alike, with the information provided on my channel… Subsequently receive the response I told them they would, which is a response absence any logical understanding, revealing that they are indeed purveyors of fallacies, merely following orders placed in books, continuing an illogical fallacy which conceals the truth. It is not only opening their minds to the fact that my research be accurate, but each individual who is exposed to these truths, systematically weakens academia’s influence as a whole. A power which they once held over all of our minds. Snapping one chain at a time. As such, freeing the minds of the inquisitive, to not only the reality of our world, and the vast unknowns that these institutes are seemingly attempting to hide, but creating allies in the pursuit of these truths. How did a group placed thousands of years back within history, lift such stones atop one another? How did they quarry them and somehow carry them many miles to their final resting places? Not only that, but to align most of these sites from ground level, with such precision to precessions of astronomical bodies? Furthermore, I personally believe, that their obsession with the sun was for good reason, and that the cyclical nature of it, which I was attacked for positing as the causation of the demise of Atlantis, within my Atlantis video, may have quite possibly been the cause for this obsession, possibly created to observe its activities after experiencing a cataclysm. Is it mere coincidence, that it could be seen as “the sun of god,” “the light bringer,” “that hell is often represented as an inferno?” but I digress. The point is, the Neolithic’s were undoubtedly far more advanced and had far more knowledge than academia are willing to admit, yet regardless due to ours and others in-depth research this is now undeniable. And anything academia is reluctant to admit, we will always find, highly compelling…