January guide to the bright planets

January guide to the bright planets

By Bruce McClure and Deborah Byrd in Astronomy Essentials | January 1, 2019


In January 2019, Mars is the sole bright evening planet. Venus and Jupiter dominate the east before sunup. Mercury fades from view as a morning planet in early January. Saturn becomes visible before sunup near the month’s end. 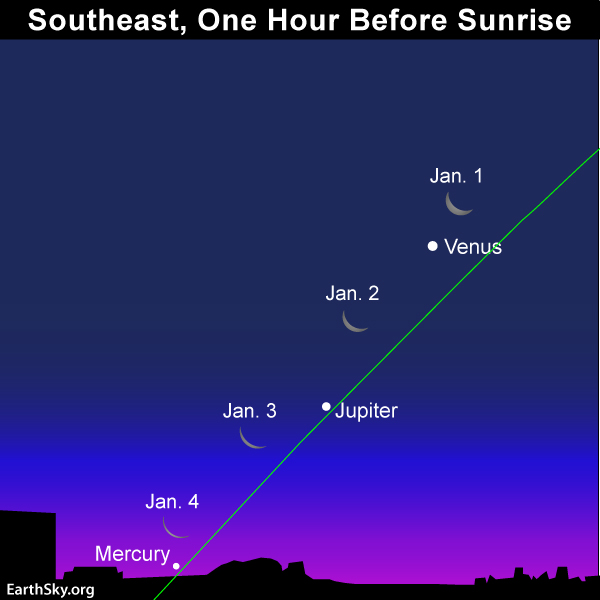 The New Year starts with the waning crescent moon cruising down a cascade of morning planets, ambling by Venus first, Jupiter next and Mercury last. Read more.
Click the name of a planet to learn more about its visibility in January 2019: Venus, Jupiter, Saturn, Mars and Mercury
Venus is the brightest planet, beaming mightily in the east before sunrise as the year begins. Watch for the waning crescent moon to join Venus in the morning sky for a few days, centered on or near New Year’s Day.
This world will reach a milestone in the morning sky on January 5 or 6, 2019, depending on your time zone, as this blazing world reaches its greatest elongation from the sun. In other words, on that date, Venus is farthest from the sun on our sky’s dome. That makes January 2019 a great month for watching Venus in the morning sky. 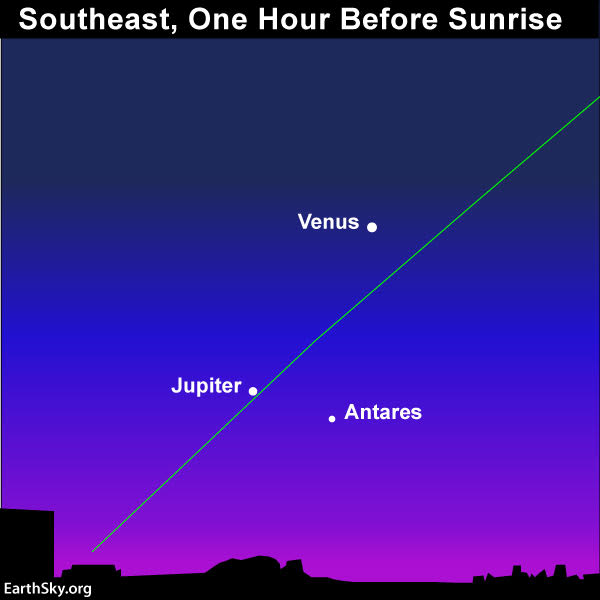 Depending on your time zone, Venus will reach its greatest morning elongation on January 5 or 6, 2019, the same date that the new moon partially eclipses the sun. Read more.
The month starts out with Venus shining above Jupiter in the morning sky, yet the month ends with Jupiter shining above Venus. Day by day, Jupiter climbs upward, away from the sunrise, while Venus sinks downward, toward the rising sun. The two will meet for a conjunction in the morning sky on January 22, 2019.
After this month, Venus will spend less time in the predawn sky before sunrise each morning, but it’ll still be dazzlingly bright and visible at dawn to all on Earth for months to come. At mid-northern latitudes, Venus will rise before astronomical twilight (dawn’s first light) until mid-March 2019; and at temperate latitudes in the Southern Hemisphere, Venus will rise before astronomical twilight until the end of May 2019.
Click here to find out when astronomical twilight comes to your sky, remembering to check the astronomical twilight box.
At mid-northern latitudes, Venus rises about 3 1/2 hours before sunrise in early January. By the month’s end, that’ll taper to about three hours.
At temperate latitudes in the Southern Hemisphere, Venus rises about three hours before sunup in early January. By the month’s end, that’ll increase to nearly 3 1/2 hours.
At the month’s end, watch for the waning crescent to pair up with the mornings planets again. The moon will be closest to Venus around January 31. See a chart for that event, in the Jupiter section.
Best New Year’s gift ever! EarthSky moon calendar for 2019 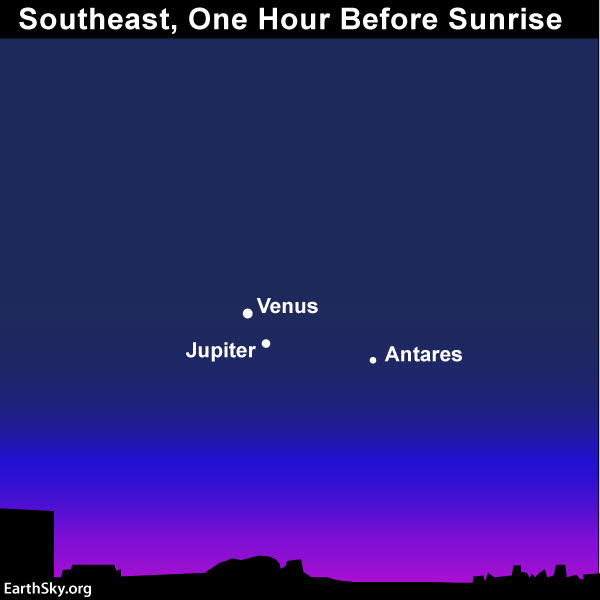 The two brightest planets – Venus and Jupiter – meet up for a conjunction on January 22, 2019. Read more.
Jupiter is the second-brightest planet after Venus. The king planet is found below Venus in the predawn/dawn sky at the beginning of the month, yet above Venus at the month’s end. The two will meet up for a conjunction in the morning sky on January 22, 2019, or one month after the Jupiter/Mercury conjunction in the morning sky on December 21, 2018.
If you’re up during the predawn hours, you might notice a bright ruddy star in the vicinity of Jupiter on the sky’s dome. That’s Antares, the brightest star in the constellation Scorpius the Scorpion. Although Jupiter shines in the vicinity of Antares all year long, Jupiter can be seen to wander relative to this “fixed” star of the zodiac. Jupiter travels eastward, away from Antares, until April 10, 2019. Then, for a period of four months (April 10 to August 11, 2019), Jupiter actually moves in retrograde (or westward), closing the gap between itself and the star Antares. Midway through this retrograde, Jupiter will reach opposition on June 10, 2019, to shine at its brilliant best for the year.
Watch for the waning crescent moon to swing by Jupiter around January 2 or 3, and then to revisit Jupiter near the month’s end, on January 30 and 31.
From mid-northern latitudes, Jupiter rises about 2 1/2 hours before the sun in early January. By the month’s end, that’ll increase to about 3 1/2 hours.
From temperate latitudes in the Southern Hemisphere, Jupiter comes up about two hours before sunrise at the beginning of the month. By the month’s end, it’s around 3 1/2 hours. 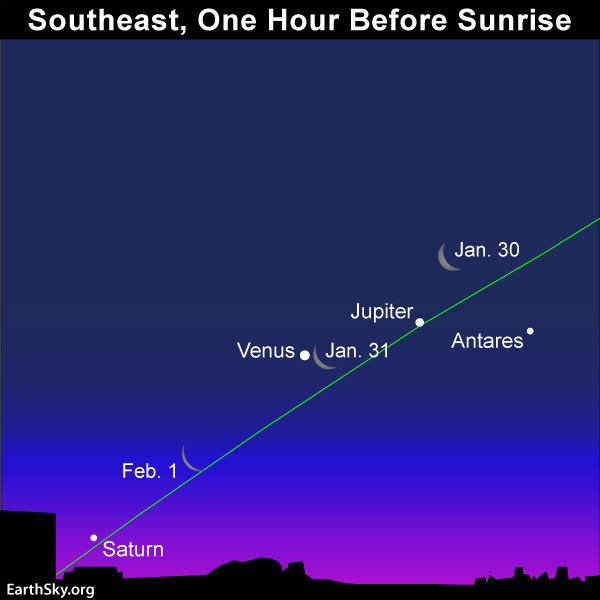 The first several mornings of the New Year 2019 feature the waning crescent moon and three morning planets. You may need binoculars to catch Mercury. Read more
Mercury, the innermost planet of the solar system, reached its moment of glory in the morning sky with the conjunction of Mercury and Jupiter on December 21, 2018. In January 2019, your best chance of catching Mercury comes very early in the month. The slender waning crescent moon pairs up with Mercury on or near January 4, providing what may be your last chance to catch Mercury in the January morning sky. After that, Mercury quickly plunges sunward, to disappear in the glare of morning twilight.
Mercury will have shifted over to the evening sky by February 2019. Mercury’s apparition in the evening sky will be especially favorable for the Northern Hemisphere in the last few weeks of February and early March 2019. 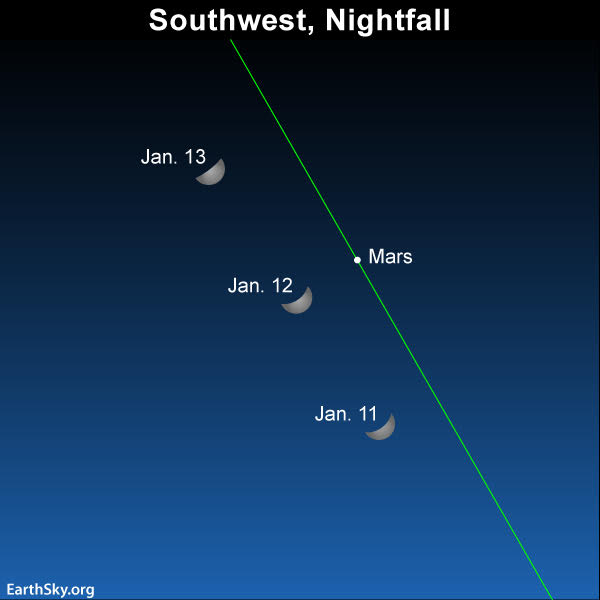 Look for the moon to pair up with Mars for a few evenings, centered on or near January 12. Read more.
Mars is the only bright planet to appear in the January evening sky. Fortunately, though dimming somewhat through the month, Mars remains modestly-bright and beautiful, shining as brilliantly a 1st-magnitude star. Moreover, Mars stays out till late evening all throughout January 2019 in both the Northern and Southern Hemispheres.
Click here for recommended sky almanacs providing you with the setting times for Mars.
Watch for the moon to shine in the vicinity of Mars for several evenings, centered on or near January 12. 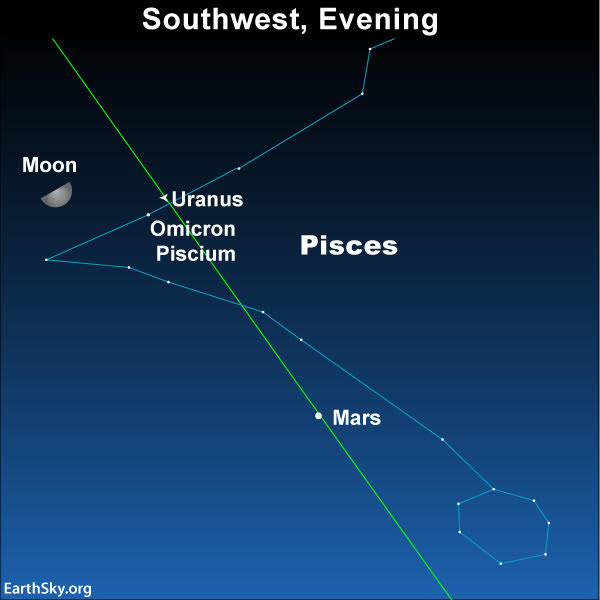 Once you’ve found Mars, you might want to try your luck with a much fainter planet planet, Uranus. Read more.
What do we mean by bright planet? By bright planet, we mean any solar system planet that is easily visible without an optical aid and that has been watched by our ancestors since time immemorial. In their outward order from the sun, the five bright planets are Mercury, Venus, Mars, Jupiter and Saturn. These planets actually do appear bright in our sky. They are typically as bright as – or brighter than – the brightest stars. Plus, these relatively nearby worlds tend to shine with a steadier light than the distant, twinkling stars. You can spot them, and come to know them as faithful friends, if you try.

Skywatcher, by Predrag Agatonovic.
Bottom line: In January 2019, Mars is the sole bright evening planet, while Venus and Jupiter lord over the morning sky. Mercury fades from view as a morning planet in early January whereas Saturn becomes visible near the month’s end. Click here for recommended almanacs; they can help you know when the planets rise, transit and set in your sky.