Plasmas are naturally formed at high temperatures, such as those reached in the interiors of stars. Neutral plasmas consist of equal numbers of positive ions and electrons. In recent experiments, a team of physicists at Rice University worked with a cold neutral plasma created out of atoms of strontium that were ionized by laser light. The team used lasers to cool the ions down to about 50 mK (millikelvin), a breakthrough that could lead to simulators for exotic states of matter that occur at the center of Jupiter or white dwarf stars. 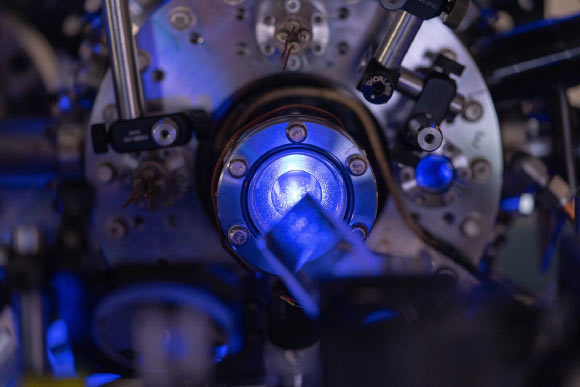 Langin et al created the world’s first laser-cooled neutral plasma. Image credit: Brandon Martin / Rice University.
“Plasma is an electrically conductive mix of electrons and ions,” Rice University’s Professor Tom Killian and colleagues.
“It is one of four fundamental states of matter; but unlike solids, liquids and gases, which are familiar in daily life, plasmas tend to occur in very hot places like the surface of the Sun or a lightning bolt.”
“By studying ultracold plasmas, we hope to answer fundamental questions about how matter behaves under extreme conditions of high density and low temperature.”
Professor Killian and co-authors used 10 lasers of varying wavelengths to create and cool the neutral plasma.
The researchers started by vaporizing strontium metal and using one set of intersecting laser beams to trap and cool a puff of strontium atoms about the size of a child’s fingertip.
Next, they ionized the ultracold gas with a 10-nanosecond blast from a pulsed laser.
By stripping one electron from each atom, the pulse converted the gas to a plasma of ions and electrons.
Energy from the ionizing blast causes the newly formed plasma to expand rapidly and dissipate in less than one thousandth of a second.
This finding is that the expanding ions can be cooled with another set of lasers after the plasma is created.
“We don’t know the practical payoff yet, but every time physicists have laser cooled a new kind of thing, it has opened a whole world of possibilities,” Professor Killian said.
“Nobody predicted that laser cooling atoms and ions would lead to the world’s most accurate clocks or breakthroughs in quantum computing. We do this because it’s a frontier.”
The team’s work was published in the journal Science.
_____
Thomas K. Langin et al. 2019. Laser cooling of ions in a neutral plasma. Science 363 (6422): 61-64; doi: 10.1126/science.aat3158