The NASA/ESA Hubble Space Telescope has captured a striking portrait of the Triangulum Galaxy, displaying a full spiral face aglow with the light of nearly 25 million individually resolved stars. It is the largest high-resolution mosaic image of this galaxy ever assembled, composed of 54 Hubble fields of view spanning an area more than 19,000 light-years across. 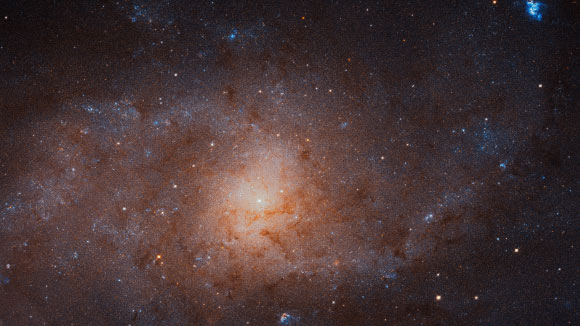 This image of the Triangulum Galaxy is a composite of about 54 different pointings with Hubble’s Advanced Camera for Surveys. The mosaic showcases the central region of the galaxy and its inner spiral arms. Millions of stars, hundreds of star clusters and bright nebulae are visible. Image credit: NASA / ESA / M. Durbin, J. Dalcanton & B. F. Williams, University of Washington.
The Triangulum Galaxy, also known as Messier 33 or NGC 598, is a spiral galaxy located at a distance of some 3 million light-years.
Under excellent dark-sky conditions, this galaxy can be seen with the naked eye as a faint, blurry object in the constellation of Triangulum, where its ethereal glow is an exciting target for amateur astronomers.
The galaxy is a notable member of the Local Group of galaxies, an assembly of more than 50 galaxies bound together by gravity. It is the group’s third-largest galaxy, but also the smallest spiral galaxy in the group.
It measures only about 60,000 light-years across, compared to the 200,000 light-years of the Andromeda Galaxy; the Milky Way lies between these extremes at about 100,000 light-years in diameter.
As the junior member of this trio, the Triangulum Galaxy provides the valuable comparisons and contrasts that only a close companion can. 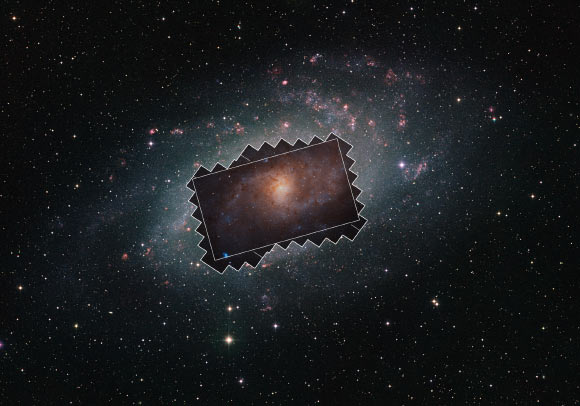 This wide-field view shows the Triangulum Galaxy as seen from the ground. The extent of the new huge mosaic created with the NASA/ESA Hubble Space Telescope is shown by the irregularly shaped region and the main image presented here by the rectangle within it. Image credit: NASA / ESA / Digitized Sky Survey 2 / Davide De Martin.
In contrast to the two larger spirals, Triangulum doesn’t have a bright bulge at its center and it also lacks a bar connecting its spiral arms to the center.
It also has at least an order of magnitude less stars than the Milky Way and two orders of magnitude less than Andromeda. These numbers are hard to grasp when already in this image nearly 25 million individual stars are visible.
Most notably, Triangulum’s star formation is 10 times more intense than in the comparable Hubble panorama of the neighboring Andromeda.
The galaxy contains a huge amount of gas and dust, giving rise to rapid star formation. New stars form at a rate of approximately one solar mass every two years.
The abundance of gas clouds in the Triangulum Galaxy is precisely what drew astronomers to conduct this detailed survey.
When stars are born, they use up material in these clouds of gas and dust, leaving less fuel for new stars to emerge.
The new Hubble image shows two of the four brightest of these regions in the galaxy: NGC 595 and NGC 604.
The latter is the second most luminous region of ionized hydrogen within the Local Group and it is also among the largest known star formation regions in the group.