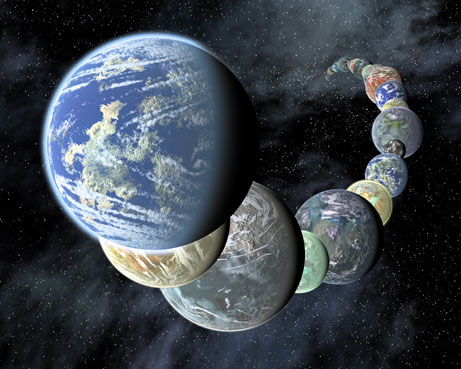 
Using data from NASA's Kepler space telescope, citizen scientists have discovered a planet roughly twice the size of Earth located within its star's habitable zone, the range of orbital distances where liquid water may exist on the planet's surface. The new world, known as K2-288Bb, could be rocky or could be a gas-rich planet similar to Neptune. Its size is rare among exoplanets - planets beyond our solar system. Located 226 light-years away in the constellation Taurus, the planet lies in a stellar system known as K2-288, which contains a pair of dim, cool M-type stars separated by about 5.1 billion miles (8.2 billion kilometers) - roughly six times the distance between Saturn and the Sun. The brighter star is about half as massive and large as the Sun, while its companion is about one-third the Sun's mass and size. The new planet, K2-288Bb, orbits the smaller, dimmer star every 31.3 days. Estimated to be about 1.9 times Earth's size, K2-288Bb is half the size of Neptune. This places the planet within a recently discovered category called the Fulton gap, or radius gap. Among planets that orbit close to their stars, there's a curious dearth of worlds between about 1.5 and two times Earth's size. This is likely the result of intense starlight breaking up atmospheric molecules and eroding away the atmospheres of some planets over time, leaving behind two populations. Since K2-288Bb's radius places it in this gap, it may provide a case study of planetary evolution within this size range. "It's a very exciting discovery due to how it was found, its temperate orbit and because planets of this size seem to be relatively uncommon," said Adina Feinstein, a University of Chicago graduate student who discussed the discovery on Monday, Jan. 7, at the 233rd meeting of the American Astronomical Society in Seattle. She is also the lead author of a paper describing the new planet accepted for publication by The Astronomical Journal. http://iopscience.iop.org/article/10.... Read more here: https://phys.org/news/2019-01-citizen...