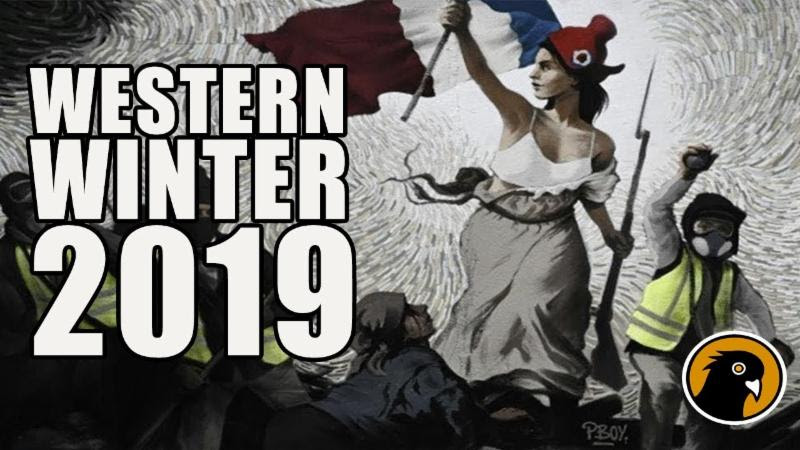 Wow. Black Pigeon speaks put together this stellar report, crystallizing the most important news of the day (slightly redacted, here):
“While images of boxers duking it out on the street with riot police have been making the rounds on social media, the [Gilets Jaunes] protesters have changed their sights and are now focusing on a new target: the banks.
“At the end of 2018, the movement protested outside a branch office of the Bank of France and set fire to its entrance. Now, according to a Yellow Vest Facebook page, plans are being made to demonstrate outside of a bank in Lyons, France. The name of that bank, I will allow you to find for yourself, as even mentioning the family name [Rothschild] is grounds for vicious censorship on YouTube.
“What the yellow vest movement is doing is making the connection between the massive profits made by banks, their tax avoidance and their charges on debt, created out of nothing, as well as other perceived underhanded behavior that globalized banking represents.
“More importantly, the connection between banks and their role, not only of manipulating the masses via corporate media and manufacturing consent, having been finally highlighted for those that have been slumbering for decades but the Yellow Vest movement is also now targeting the industry that pulls the strings behind both media and government: the financial or banking industry.
“This is a pivotal moment; a crossing of the Rubicon, if you will of public awareness and sentiment. Following the crumbs, people are finally realizing that the media and government; their politics, policies and direction is not about the democratic will of the people or the desires of the common man on the street but about satisfying capital, multinational corporations and the financial sector…
“Like everywhere in the West, politics is awash in special interest money and while your average member of the public, whether in America or France, for that matter may not understand the hows and whys they are starting to understand the reality of what President Donald Trump calls “the Swamp” and the revolving doors between corporations, government and banking and how the media is used to manufacture prepackaged, dumbed-down consent.
“Thus, reports are now emerging that the Yellow Vest movement has the banks squarely in their sights and, in what is perhaps the first-ever planned and voluntary bank run, it is set to happen in mid-January.
“The idea was first floated on social media as a legal and nonviolent way to rebel against the state. The post in part read, ‘We all know that the powers of the country are not in the hands of the government but in those of the banks. If the banks weaken, the state weakens immediately. The operation will be reproduced the following month in case of failure.’
“The operation is now being billed the ‘Tax Collector’s Referendum’ and is a first-ever…attempt to effect change and check the power of government through targeting of the banks…
“This protest and proposed bank run is vastly more important than the events that surround it and could become a possible game-changer, for the sheer fact that it is shining a light on and bringing to the attention of the masses of what many believe to be the parasitical nature of the global banking industry, as well as its and global multinational corporations’ oversized influence on the levers of democratic nations.
“This awareness of the forces of special interests that are aided and abetted by the political class and that shape national policy and goals for their own benefit and to the detriment of those governed and the awakening of the public consciousness – it is the most important byproduct of what is now being called the Western Winter 2019.
“It begins.”

» The Greek Bank Runs Have Begun
» "SHEAR PANIC!" Bank Runs have begun in Italy!
» Panic at Davos After Swiss Move as Bank Runs Accelerate and Financial System Begins to Implode
» "HSBC Hong Kong, Bank of America, Deutsche Bank and the Bank of England, are cross-collateralized to each other with derivative debt (I.O.U.s) between the aforementioned banks now approaching 10 TRILLION":Heneghan
» "Global markets are likely to receive fresh verbal policy signals in the week to 18 July with the chiefs of the European Central Bank (ECB), the Federal Reserve, Bank of Japan (BoJ), and the Bank of England (BoE) scheduled to speak at separate events"