Ancient inhabitants of Easter Island (Rapa Nui) built their famous statues (moai) and megalithic platforms (ahu) that supported them near the island’s limited freshwater sources. That’s according to new research published in the journal PLoS ONE. 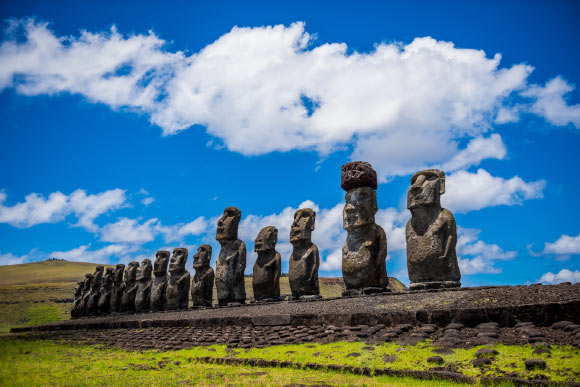 Easter Island, known as Rapa Nui to its earliest inhabitants, is one of the most remote inhabited islands in the world. Image credit: Yerson Retamal.
Lead author Dr. Robert DiNapoli from the University of Oregon and colleagues used quantitative spatial modeling to explore the potential relations between ahu construction locations and subsistence resources, namely, rock mulch agricultural gardens, marine resources, and freshwater sources — the three most critical resources on Easter Island.
“Many researchers, ourselves included, have long speculated associations between ahu/moai and different kinds of resources, e.g., water, agricultural land, areas with good marine resources, etc.,” Dr. DiNapoli said.
“However, these associations had never been quantitatively tested or shown to be statistically significant. Our study presents quantitative spatial modeling clearly showing that ahu are associated with freshwater sources in a way that they aren’t associated with other resources.”
“The issue of water availability — or the lack of it — has often been mentioned by researchers who work on Easter Island,” added co-author Professor Carl Lipo, an anthropologist at Binghamton University.
“When we started to examine the details of the hydrology, we began to notice that freshwater access and statue location were tightly linked together. It wasn’t obvious when walking around — with the water emerging at the coast during low tide, one doesn’t necessarily see obvious indications of water.”
“But as we started to look at areas around ahu, we found that those locations were exactly tied to spots where the fresh groundwater emerges — largely as a diffuse layer that flows out at the water’s edge. The more we looked, the more consistently we saw this pattern. Places without ahu/moai showed no freshwater.”
“The pattern was striking and surprising in how consistent it was. Even when we find ahu/moai in the interior of the island, we find nearby sources of drinking water.”
The proximity of the monuments to freshwater tells the researchers a great deal about the ancient island society.
“The monuments and statues are located in places with access to a resource critical to islanders on a daily basis — fresh water,” said co-author Dr. Terry Hunt, an anthropologist and archaeologist at the University of Arizona.
“In this way, the monuments and statues of the islanders’ deified ancestors reflect generations of sharing, perhaps on a daily basis — centered on water, but also food, family and social ties, as well as cultural lore that reinforced knowledge of the island’s precarious sustainability.”
“And the sharing points to a critical part of explaining the island’s paradox: despite limited resources, the islanders succeeded by sharing in activities, knowledge, and resources for over 500 years until European contact disrupted life with foreign diseases, slave trading, and other misfortunes of colonial interests.”
_____
R.J. DiNapoli et al. 2019. Rapa Nui (Easter Island) monument (ahu) locations explained by freshwater sources. PLoS ONE 14 (1): e0210409; doi: 10.1371/journal.pone.0210409

» Did Easter Islanders Have Early Contact with South Americans?
» Easter Islanders Find Strange Buried Head With Almond Shaped Eyes
» Easter Islanders Likely Believed Megalithic Statues Helped Maintain Soil Fertility
» Planet Nine a BLACK HOLE on the edge of solar system? Researchers close to breakthrough
» "not just some but all sources all over the world, banks agencies and sources all say The IQD is finally poised to be the main star of the Global Currency Reset...."