OUT OF MIND » THE INSANITY OF REALITY » #QTARD DRAMA THEATER ARCHIVES » #QAnon Drama Theater: Q and the Fine Art of the Sh!t Post plus more

#QAnon Drama Theater: Q and the Fine Art of the Sh!t Post plus more

Q and the Fine Art of the Sh!t Post 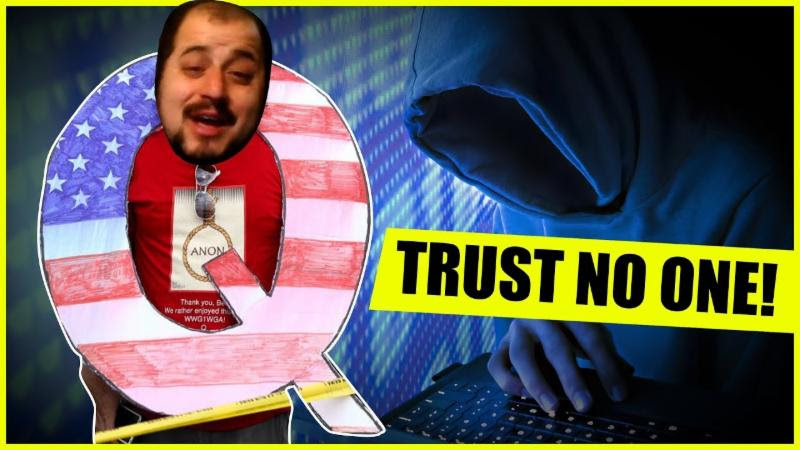 Santa Claus, the Tooth Fairy and Superman are not real…and John F Kennedy Jr is not alive after all. Many are angry and shooting the messenger, not because they were lied to but because they prefer that the “lie” be true.
In what could go down in history as a landmark case study on the collision of 21st century social engineering, with Hope Porn, wishful thinking and the mythopoetic structures of the mind, the jig is finally up on QAnon. Or so say two men claiming to be among the original creators of QAnon, Defango and Dreamcatcher. Jason Bermas of WeAreChange is joined by these two, who take us into the world of trolldom and gamer/hacker culture that lives in online forums like Reddit, 4Chan, 8Chan, Discord, etc.
They say no one ever expected it to last as long as it did or to take on a life of its own the way that it did.
Defango aka Manuel Chavez is a self-described “mind-hacker” who says he had an idea to do a social engineering experiment, the main intent of which was to determine who is for real in the Alternative Media; to see who is in it for the money and who is in it for the truth. The only way he saw to do it was to be in control of something from the beginning and then to watch what happened.
If you’ve been watching Defango, he has been broadcasting his role for some time but because he is such a complete troll, nobody believed him! Many still don’t.
Dreamcatcher aka James Brower is a self-described “Shit Lord”, a veritable master in the fine art of [url=https://www.urbandictionary.com/define.php?term=Shit Posting]Shit Posting[/url] on the image boards. He was a disgruntled Obama voter, drawn to the 2016 presidential campaign and ended up doing social media work as a low-level Trump campaign volunteer.
In the Fall of 2017, Dreamcatcher teamed up with Defango and together with some friends from the Cicada 3301 puzzle site, they hatched their little moonbaby into the Interwebz, where it transformed into a LARP* – or as Jason Bermas calls it, “A shit-posting hoaxverse.”
On October 29th, 2017, the QAnon LARP escaped from the proverbial lab when Defango leaked the “Tripcode” (i.e., the password for the QAnon account in 4Chan) in a YouTube video. QAnon was then moved by users who were not involved with its foundation to 8Chan. He says that almost immediately, “The Jerome Corsis of the world” began promoting it and QAnon metastasized into the cottage industry that it has since become.
Creators in the Alt Media space who endorsed QAnon attracted massive amounts of new followers and traffic, which generated ad revenue, the sale of “Q-Drop” cellphone apps, mugs, T-shirts and other swag.
Prominent QAnon proponents included David Wilcock, Jerome Corsi, Jordan Sather, SGTReport, Tracy Beanz, Praying Medic and X22 Report, who in the eyes of Defango have been left with their “pants pulled down” – to the degree to which they’ve hitched their credibility to the QAnon LARP.
Defango and Dreamcatcher don’t like that people may have been taken advantage of by what they call the “grifters” but Defango repeats that the intent of the project was to reveal the intent of those who got involved and the only way to do that was to let them do what they did.
Bermas asks them to reflect on the LARP and whether they have any regrets. Dreamcatcher says, “You never regret a shit post because you had the intent of it being a shit post…but I do think we can learn a lot from this.”
He goes on to say that if we had a government that was more transparent, something like this would not have happened. People gravitated toward QAnon because they don’t trust their media and they don’t trust their government. He says that if you really, truly care and if you want something to change, you can’t do it by just sitting behind a keyboard. You have to get off the online forums and get involved in grassroots political action.
Defango also has “No regrets.” He says this was meant to be a direct teaching episode on how to use the Internet and that the next step is to learn how to use discernment. The LARP wasn’t done with malice, it was a lesson of survival in the high tech theater of nonstop information warfare. That’s an admirable message from a legendary troll.
For whatever it’s worth, I have two ex-military sources who tell me that it’s not a total hoax, as suggested in this video (a third such sources says it *is* a hoax). One tells me, “It started as a military intelligence op and then morphed into the more rah-rah Trump insider thing.” This observation doesn’t rule out Defango’s initial involvement, as the Cicada site is (or was) a recruitment tool of military intelligence. In another podcast on his own channel, Defango said that Mainstream News reporters were now all over him, trying to find a way to blame the LARP on President Trump or to suggest that Trump was somehow behind it, which Defango categorically denies.
The QAnon movement has been out of the hands of these purported originators for over a year, indeed for the majority of its existence. It will be interesting to see how Q’s major proponents react to this “reveal”, if at all. The question remains who is posting as Q now?
===
*LARP is the acronym for Live-Action Role Play, a hobby that emerged in the late 20th century with the board game, Dungeons and Dragons.

OUT OF MIND » THE INSANITY OF REALITY » #QTARD DRAMA THEATER ARCHIVES » #QAnon Drama Theater: Q and the Fine Art of the Sh!t Post plus more