So, you’ve seen and love Heavy Metal Parking Lot, right? Well, one of the filmmakers behind that legendary documentary, Jeff Krulik, has also been involved with a number of other docs, including Show Us Your Belly, a hilarious ten-minute short shot during a spontaneous Washington DC street party that occurred following the Washington Redskins’ 1988 Super Bowl victory. In the video, we see happy and/or drunk fans whooping it up and mugging for the camera, as interviewers ask the sort of things you’d expect in the moment, but then toss out nonsensical questions and requests that have nothing to do with a Super Bowl celebration. Very funny stuff.
Jeff Krulik’s friend Seth Morris, who Jeff says “was pretty much the mastermind” behind the shoot, provided us with some background and details on how it went down.


Show Me Your Belly was filmed the evening of January 31, 1988, and it was a fun little project that required a little bit of planning, and for the Washington Redskins to upset the favored Denver Broncos during Super Bowl XXll.
Jeff Krulik and I have been very close friends, and partners in crime, since meeting at WMUC-FM, the University of MD free-form radio station, and have been hanging out ever since. I did a punk show and a comedy show at WMUC and, from 1983-93, did Corn Between Your Teeth, a weekly Saturday night comedy/spoken word show on WPFW-FM. Jeff and I have always been Redskins fans and, to give you an idea of just how old we are, when we were young, the Redskins were consistently Super Bowl contenders. 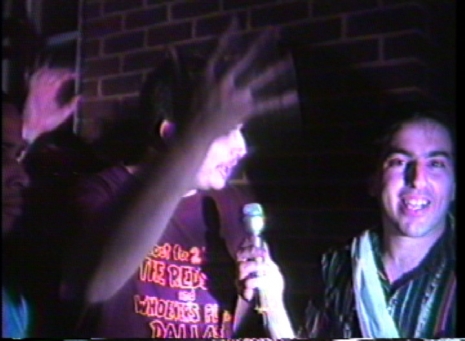 I loved Mal Sharpe’s man-on-the-street interviews, played his material on my show quite often, and had him on my show. Jeff was the Public Access Director at Metrovision Cable and had access to all this cool gear, which served him well with Heavy Metal Parking Lot, and other really great films. Jeff should have been born 150 years ago as he would have given P.T. Barnum a run for his money. Jeff Krulik is also the case study of how you don’t have to do drugs to be absolutely insane, and I say that with great affection. For example, Jeff somehow finagled his way into the maximum-security wing at St. Elizabeth’s Psychiatric Hospital, ostensibly to videotape a soul concert where we mixed with the inmates hoping to run into John Hinkley Jr., Ronald Reagan’s attempted assassin. Jeff looks perfectly normal but, trust me, he’s fuckin nuts!
Although Super Bowl XXII was 31 years ago, I do remember very clearly the day of the game because I had Jeff, my girlfriend Pat Goslee, housemate Liz Evans (who hauled around the 1980’s super-heavy monster battery pack and cables), Steve Kiviat (also from WMUC and has been writing music reviews for nearly 40 years), and some other friends over to my place to watch the Super Bowl, with the goal of heading down to Georgetown with the video gear and asking moronic questions of happy drunk people—if the Skins won the game. 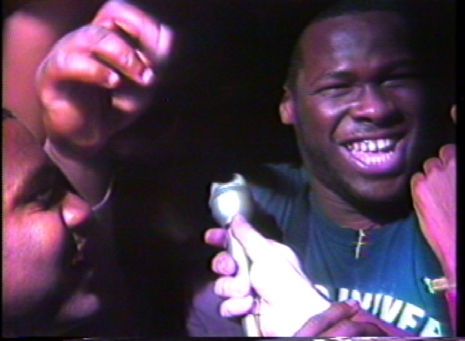 By halftime, when it was clear the Redskins were going to win, we packed up the insanely heavy 1980’s 3/4 video gear and headed to historic Georgetown right as the game ended. Georgetown is the party center of the city, and nobody in DC had to be told that that’s where people were going to go ape-shit. It was unseasonably warm, so I wore my bathing suit (a young woman pulled it down, fortunately off camera), and we just plowed in. People were just ecstatic, jumping up and down, black, white, Latino, Indian, young, old, rich, poor and perfect strangers were hugging each other. The police were cool, nobody was getting hurt and it was a big love-in. When they saw the camera, they assumed we were from a TV station, so everyone asked, “What channel is this?

The goal was to pay homage to the legendary Mal Sharpe and lift one of his classic questions, but directed to extremely drunk and happy revelers. I did many of the interviews, Steve Kiviat did a few with his classic facial expressions, Jeff asked a few as well, and Pat at the very end.

The ultimate goal was to come away with some funny material, give a nod to Mal Sharpe, and try to add a goofy little time capsule to a really great night in DC sports history. I think we succeeded.

A four-minute cut of Show Us Your Belly was screened during the Don’t Quit Your Day Job Film & Video Festival, which took place on February 5, 1990, at the American Film Institute Theater at the Kennedy Center. This was its only public showing. The program was presented by Jeff Krulik and his collaborator on Heavy Metal Parking Lot, John Heyn.

Embedded below is the complete, ten-minute version of Show Us Your Belly, which was uploaded to Youtube by Jeff. See more videos he’s added to the platform, including some of the other shorts screened during the Don’t Quit Your Day Job fest, here.

Thanks to Jeff Krulik and Seth Morris.

» Super Bowl the Way it Should Be!!
» Something Shocking About the NFL & the SUPER BOWL You Need to See!
» Super Bowl 49 Nexus by TS Caladan
» Decoding the 2017 Super Bowl
» Here We Go! *SUPER BOWL LIII ILLUMINATI HALFTIME* ANALYSIS