OUT OF MIND » THE INSANITY OF REALITY » FINANCIAL COLLAPSE » Remove the Globalist Systems, then Control the Central Bank

Remove the Globalist Systems, then Control the Central Bank 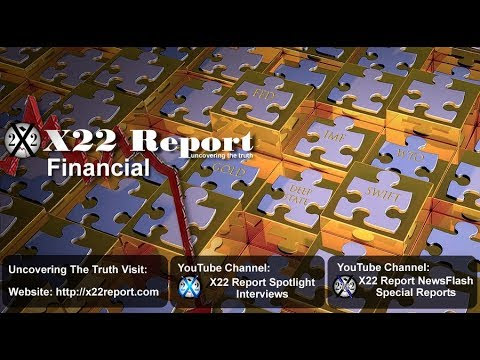 Remove the Globalist Systems, then Control the Central Bank

Dave from the X22 Report gives the Alternative News view on the rapid de-dollarization under way and the situation in Venezuela. It’s almost a through-the-looking glass view of events, compared to the official narrative but not nearly as unlikely as the stories we heard yesterday from Max Igan about “stolen history.”
Trump’s agenda appears to be to purposefully break up the American Empire. What most people don’t understand is that the American Empire was never truly American. Over the course of the 20th century, America was made into a franchisee and the enforcer of the Globalist bankster “petrodollar world order”. Mainstream pundits insist that it’s the other way around and complain that Trump is crazy. Trump knows exactly what he’s doing.
Recall for the millionth time that the dollar is printed by the US Federal Reserve Bank, not by the US Treasury nor by any branch of the US government but by a private corporation owned primarily by European aristocrats. Trump is peeling America off from this parasitic alliance.
We’re in a period of dramatic transition, of de-dollarization and we’re moving into a new energy paradigm. Petroleum will not be the dominant source of energy forever. The petrodollar and the wars of aggression for the control of petroleum resources will likewise end.
Over the decades, other energy technologies were suppressed to maintain this petrodollar world order. In the not so distant past, people in possession of alternative technologies who were deemed a threat to this order (i.e., Stan Meyers) were killed but now we see that alternative technologies are coming out and their inventors are not dying in mysterious accidents.
Interestingly, Trump’s uncle, John was an MIT physics professor who the FBI put in charge of studying the Tesla/" target="_blank">Nikola Tesla papers that were seized upon the latter’s death in 1943. John Trump was in charge of determining what to do with Tesla technology.
Some believe that Trump has his hands on some of it. If so, that might even better explain why he doesn’t hesitate to let the already-doomed, debt-encumbered petrodollar, based on a dying energy paradigm die (and to rack up all kinds of debt with military spending beforehand, like the bankruptcy veteran that he is). In this video, Dave goes into more details about this transition.
As for Venezuela, the Bolivarian Revolution has been in control for about 20 years. It only “worked” while there was a commodities boom (until around 2012-2013) – if by “working”, you can call stealing peoples’ businesses and nationalizing them and encumbering these businesses with wasteful, inefficient bureaucracies.
US economic sanctions were originally placed on Venezuela by Barack Obama and the latest rounds of sanctions did not begin in earnest until 2017, after Maduro dissolved the legislative branch of his government and replaced it with a small tribunal of judges whom he personally selected, in what international observers called a “self-coup”.
Maduro is in breach of the Venezuelan constitution, plain and simple. He and his cohorts have already stolen billions. Still, this is not enough of a reason to interfere with Venezuela and I disagree with the sanctions against the people of that country – but to blame all of what’s happening on Trump, when the situation has been developing for decades is very disingenuous.
I don’t like US interventionalism but I also don’t like reports I’ve read that Iran is training the Venezuelan forces that support Maduro. As a dual citizen of the US and Brazil, I don’t want the Iranian military in South America, any more than I want them in North America! I definitely don’t want to see the war in Syria imported to the region.
Hopefully, things won’t escalate and I don’t think they will, because Trump doesn’t want a war. I see this Venezuela action the same way I saw his widely-publicized bombing campaigns of Syrian assets. He’s throwing the the Neocons a bone by letting them engage in their shows of force but he’s actually having them return the gold to Venezuela – the opposite of what was done by Obama in Ukraine and Libya, when the US straight-up stole their gold.

OUT OF MIND » THE INSANITY OF REALITY » FINANCIAL COLLAPSE » Remove the Globalist Systems, then Control the Central Bank

» (IRAQ)Central Bank announces the use of payment systems for the settlement of financial transactions
» The Move To Remove The Central Bank And Reset The Economic System Is A Go - Episode 1534a
» Confirmed the central bank to control the exchange rate U.S. dollar against the Iraqi dinar
» Catherine Austin Fitts & Dark Journalist: The CDBC (Central Bank Digital Currency) Biometric Control Grid
» Globalist Agenda Watch 2015: Update 17B – Debunking the phony “BRICS Bank versus World Bank/IMF” conflict