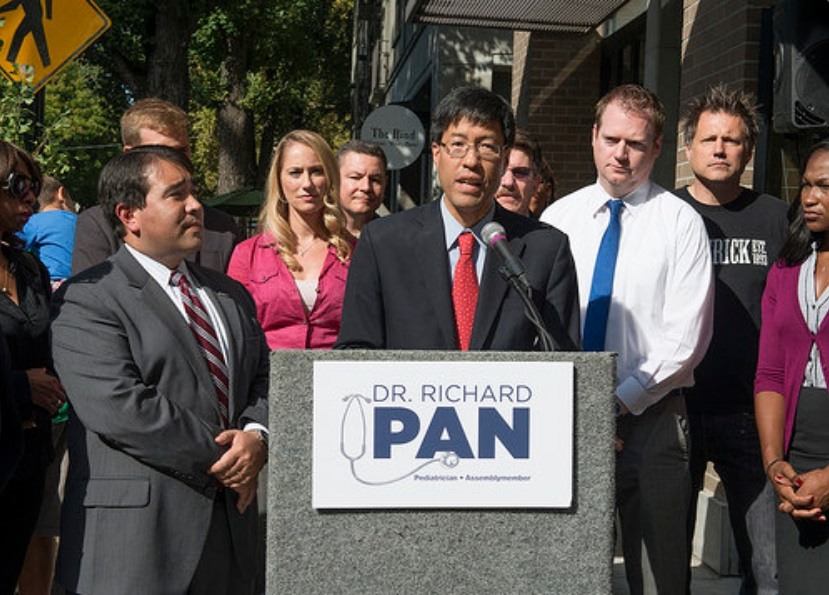 California Senator Dr. Richard Pan
Comments by Brian Shilhavy
Editor, Health Impact News
In 2015, in spite of widespread public opposition, California became the first state in the U.S. to remove a philosophical and religious exemption for childhood vaccines as a requirement for school attendance. The bill was authored by Dr. Richard Pan, with strong ties to the pharmaceutical industry.
California is now one of only 3 states in the U.S. to not allow parents the choice to opt out of vaccines for their children (Mississippi and West Virginia are the other two, and apparently never had parent exemptions.) The only way to get a vaccine exemption in these three states today is to have a doctor write a vaccine exemption based on medical reasons.
However, Dr. Richard Pan is not satisfied with just removing parental choice in matters of childhood vaccines. In public comments and in a commentary published in the Journal Pediatrics, Pan has made it clear that he wants to try to reduce or eliminate altogether the choice of family doctors in writing vaccine medical exemptions as well.
The California Medical Board is currently being sued for intimidating doctors who write vaccine medical exemptions. See:

by A Voice For Choice Advocacy, Inc.
Sacramento – State Senator Richard Pan, the author of SB 277, a law that requires kindergartners to get twenty-seven different doses of medication and fifteen different shots or forego a public education, has indicated his 2019 plans include overriding doctors’ free will.
Legislation or other efforts to this end would be an unprecedented and dangerous intrusion into the doctor-patient relationship.
Pan recently detailed these plans in multiple different interviews, where he claimed there is a problem with “medical exemptions” – i.e., official opinions by a doctor that if a child is vaccinated, that child could suffer harm.
Medical exemptions are extremely rare, and doctors grant them only if a child or a family member suffers from things like a debilitating disease (such as leukemia), or if a child or a family member had a well-documented negative reaction to a vaccine or one of its ingredients.[1]
Just 0.7% of students obtain such an exemption, up from 0.2% before the passage of SB 277, a change that is not statistically significant. The total number of children exempt from the state’s vaccine requirements (i.e., including those 1.1% exempt due to disabilities) has actually dropped since the passage of SB 277, going from 2.6% to 1.9%, indicating that Pan’s plan is a solution in search of a problem.[2]
Yet Pan implied that some doctors are charging to issue exemptions, a fact unsupported by any evidence.[3]
Doctors charge for all services they provide, but they are guided by time-worn medical and legal principles, both under state law, state licensing and traditions like the Hippocratic oath.
Pan’s planned attempt to crack down on doctors granting exemptions, would almost certainly get in the way of a doctor making an evaluation based on empirical, scientific evidence.

“Imagine being the parents of a child who the federal government concluded was injured because of a condition that made them susceptible to vaccines, and then your family doctor tells you she is too terrified to exempt your younger child from those same vaccines, because the thought police might take her license.  That’s what Dr. Pan apparently has planned,” said Christina Hildebrand, President and Founder of A Voice for Choice, a non-profit that advocates for medical freedom.
“I can’t imagine what good would come from the government regulating a doctor’s free will to diagnose as he sees fit – it starts to resemble regulation of free speech,” Hildebrand concluded.

“Any legislation or action on behalf of drugmakers that interferes with a doctor’s individual judgment will be hotly contested,” said Hildebrand.
“We cannot let government determine what is in the best interests of any individual, overriding the doctor-patient relationship. Every doctor and patient in the state should be alarmed if such action is brought forward.
If this can be done with vaccinations, what medical treatment will be next? Patients need to be able to trust their doctors and not worry that they are being pressured or worried that their honest, scientifically based medical judgement will be overruled by a legislatively appointed official who has never met them.”