For the second time so far this year, marijuana legislation in Congress has been officially designated with the bill number 420. It seems to be an obvious nod to the increasingly mainstream cannabis culture from lawmakers on Capitol Hill. 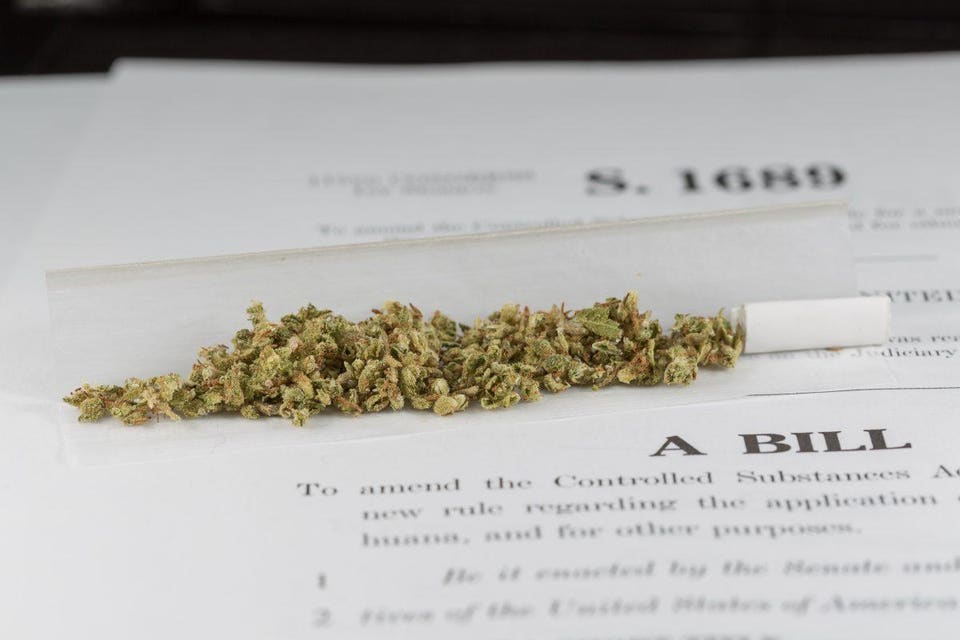 Photo by Tom SydowPhoto by Tom Sydow
Sen. Ron Wyden's (D-OR) proposal, S.420, would deschedule marijuana by removing it from the Controlled Substances Act (CSA), establish a federal excise tax on legal sales and create a system of permits for businesses to engage in cannabis commerce.
Marijuana enthusiasts, of course, celebrate their favorite plant on April 20, also known as 4/20.
“S. 420 may get some laughs, but what matters most is that it will get people talking about the serious need to end failed prohibition," Wyden said in an emailed statement.

VIDEO: 3 Ways You Can Get The Most Out Of Purpose

Can A New Model Of Apprenticeships Save What’s Left Of The California Dream?

In California, the first move to establish statewide medical cannabis regulations was through 2003 legislation numbered SB 420.
In 2017, a Rhode Island senator introduced bill to legalize marijuana that was designated as S 420.
And back on Capitol Hill, the first House vote on an amendment to prevent the Department of Justice from interfering with state medical cannabis laws was via 2003's Roll Call 420.
“The federal prohibition of marijuana is wrong, plain and simple. Too many lives have been wasted, and too many economic opportunities have been missed,” Wyden said in a press release. “It’s time Congress make the changes Oregonians and Americans across the country are demanding.”
NORML Political Director Justin Strekal called the new bill "a thoughtful and thorough approach to how the federal government could ultimately end prohibition."
“Hailing from the first state to decriminalize marijuana back in 1973, Senator Wyden has a unique and much-needed perspective that his colleagues in the nation’s upper chamber would be wise to follow,” he said.
Aside from S.420, which would also authorize regulations on packaging and labeling of cannabis products and apply alcohol advertising guidelines to the product, Wyden introduced two separate pieces of marijuana legislation in the Senate this week.
One of the bills, S.421, seeks to "reduce the gap between Federal and State marijuana policy." It proposes a number of changes such as exempting state-legal marijuana activity from the CSA, allowing banking access for cannabis companies, eliminating advertising prohibitions, expunging criminal records, shielding immigrants from deportation over marijuana and allowing Department of Veterans Affairs doctors to issue medical cannabis recommendations.
The other piece of legislation, S.422, would exempt state-legal cannabis businesses from the federal provision known as 280(E), which prevents them from taking normal business tax deductions that are available to operators in other industries.
This third bill is the only one of Wyden's new proposals that comes with initial cosponsors. Also signing on to the legislation are Sens. Rand Paul (R-KY), Michael Bennet (D-CO) and Patty Murray (D-WA).
Wyden filed previous versions of all three bills during the last Congress, but none were brought to a vote.
The new cannabis legislation comes at a time when legalization advocates are more hopeful than ever before about the prospects for federal marijuana reform.
Next week, the new House Democratic majority will hold a hearing on marijuana businesses' lack of access to banks, part of a plan Blumenauer proposed in a memo to party leaders that entails moving a number of incremental reform bills leading up to the eventual federal legalization of marijuana in 2019.
“Oregon has been and continues to be a leader in commonsense marijuana policies and the federal government must catch up,” Blumenauer in a press release. “The American people have elected the most pro-cannabis Congress in American history and significant pieces of legislation are being introduced. The House is doing its work and with the help of Senator Wyden’s leadership in the Senate, we will break through.”
A number of bills with differing approaches to end federal marijuana prohibition have been filed in Congress in recent years, and it remains to be seen which formation House leaders will choose to advance, if any, and whether the Republican-controlled Senate would go along.
President Trump, for his part, has signaled support for moves to end federal marijuana prohibition.
In the meantime, activists are reacting to the increasing interest in marijuana reform on Capitol Hill and lawmakers' nods to cannabis culture with a mixture of lighthearted optimism.
“With 420 legislation pending in both chambers of Congress, the next logical step is for lawmakers to sit in a circle and finally hash out their differences,” NORML's Strekal joked.
Tom Angell publishes Marijuana Moment. Follow him on Twitter for breaking news, subscribe to his daily newsletter and support cannabis journalism on Patreon.