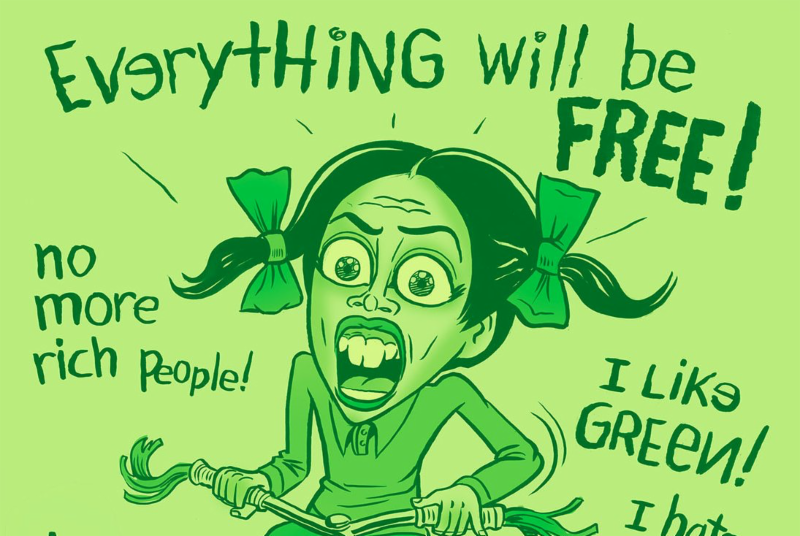 Behind the Green Mask: Agenda 21


It’s funny how so many topics once deemed to be “Tinfoil Hat conspiracy theories” keep getting proven to be fact. Concern about Agenda 21, aka the United Nations’ plan for Sustainable Development is an example.
Agenda 21 was placed front and center before Americans last week in the form of Alexandria Ocasio-Cortez’ Green New Deal. Among its unrealistic goals, the Green New Deal aims to restructure the entire global energy economy within 10 years by completely “transitioning” the US out of fossil fuels and nuclear energy and into renewables, like wind and solar power.
What few will admit is that this plan implies genocide. As evidenced by the collapse of Rome and demonstrated repeatedly by successive societies, the halving of energy consumption leads directly to the collapse of human populations.
As a Bay Area forensic commercial real estate appraiser and expert witness, Rosa Koire observed how property owners in Northern California have been barred from using their own properties, making these cheap when the Government wants to acquire them for Eminent Domain.
While investigating this, Koire ran into Agenda 21 – or as she calls it, “The biggest public relations scam in the history of the world,” and how this global plan aims to break down economies and to depopulate areas considered to be rural or suburban, concentrating populations into larger cities.
“This is the plan. It’s the loss of our industry, our agriculture, our food independence. Ultimately, it’s the loss of our sovereignty, as a free nation…It’s social engineering…it’s the acceptance of what I call the ‘new poverty’.”
She covers the anti-human Senate Bill 1867, which brands the common people as “enemy combatants” in the eyes of the Government and she describes how Agenda 21 is being rolled-out – never by name – this is carefully avoided. Hence, the Green New Deal. Agenda 21 programs can be identified by their “communitarian” ethos and we need only look to the economic disaster now facing Germany to see what such anti-growth green economic policies have wrought.
As Koire points out, Agenda 21 is a global initiative being carried out locally. But there is hope on the horizon, in that the Yellow Vest protests have now begun to emerge in Germany, while they continue to rage in France. The Gilets Jaunes are a direct response to the implementation of such anti-human Agenda 21 policies.


(Natural News) According to Biblical scholars, there are four “horsemen” that represent four of the Seals prophesied in the Book of Revelation, which describes the complete destruction of human civilization as God’s wrath is unleashed upon those who serve Satan. The fourth of these horsemen is known as “Death,” and it is usually described as a horseman riding a “pale horse.” But there’s a key translation problem that’s causing almost everyone to miss a bigger truth that needs to be pointed out.
The passage from Revelation (6:7-8) is typically translated as this: (English Standard Version)
And I looked, and behold, a pale horse! And its rider’s name was Death, and Hades followed him. And they were given authority over a fourth of the earth, to kill with sword and with famine and with pestilence and by wild beasts of the earth.
However, I have learned this is a mis-translation. In the original Hebrew text, the color of the horse is not “pale” but rather chloros, the Greek word for “green,” sharing the same word root as “chlorophyll,” the molecule of photosynthesis for all green plants on our planet.
Thus, the passage actually should read something more like, “And I looked, and behold, a green horse! And its rider’s name was Death.”
Or, translated into truly modern times, “And I looked, and behold, a Green New Deal! And its author’s name was Ocasio-Cortez.”

“Authority over a fourth of the Earth”

As I have exhaustively documented at Natural News, the environmental movement is a global death cult that literally seeks the complete destruction of all life on Earth, fulfilling the Revelation warnings about famine (global food collapse) and plagues (outbreaks of infectious disease).
Support our mission to keep you informed: Discover the extraordinary benefits of turmeric gummy bears and organic "turmeric gold" liquid extract, both laboratory tested for heavy metals, microbiology and safety. Naturally high in potent curcuminoids. Delicious formulations. All purchases support this website (as well as your good health). See availability here.

It is the environmental movement, of course, that has declared war on carbon dioxide, the “miracle” molecule of life which powers the photosynthesis process that requires chlorophyll (and produces oxygen as a byproduct of plant respiration). Carbon dioxide might even be called the “God molecule” since it is the very basis of nearly all food webs and living ecosystems on the planet. Yet the environmental movement has declared this “God molecule” to be a pollutant… and now promises to banish this molecule by dimming the sun with geoengineering efforts, literally “blocking the light” that powers all plant life on Earth.
In examining this passage from Revelation, I was especially struck by the line describing how “Death” was granted “Authority over a fourth of the Earth.”
The Earth is roughly one-fourth land mass, and those lands are inhabited by nations and governments. Nations are not governed from the oceans; they are established and run from land (since humans are land creatures, not ocean creatures). The passage from Revelation says, then, that Death is granted authority over all nations … i.e. a geopolitical global governance that rides a “green” horse in the color of chloros.
This almost perfectly describes a globalist carbon reduction scheme that would collapse CO2 levels in the atmosphere, leading to a global collapse of food crops, rainforests and nearly all plant life. It’s all being pushed, of course, in the name of “saving” the planet (while actually destroying it).

“To kill with sword and with famine and with pestilence”

To enforce the climate change carbon taxes, governments of the world will wield “swords” (i.e. government weapons) against the citizens. The result of the collapsing CO2 in the atmosphere will be the catastrophic collapse of the global food supply, since all food crops require carbon dioxide to produce food.
This simple, scientific truth about botany is completely glossed over by the entire globalist media, which deliberately lies to the world, claiming CO2 is a dangerous molecule that will destroy the Earth. In truth, a world without CO2 in the atmosphere is a near-dead world, almost completely devoid of food crops or human civilization. Watch my video explanation to learn more: