OUT OF MIND » TRUTH IN CONSPIRACY THEORIES? » #QTARD DRAMA THEATER ARCHIVES » Why Trust the Plan? Is There a Plan?

Why Trust the Plan? Is There a Plan? 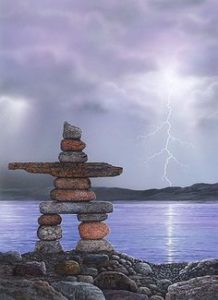 Something to run by you: the psyop—no, the other psyop—because we know this takedown is being done peacefully and subtly. We also know they are using the dark’s weapons against them.
It seems many are playing roles, and it may be that the White Hats planned to install characters with the express purpose of instilling such a fear of socialism, full-term abortions, denial of protected borders, vaccine-happy protocols, the release of violent illegal alien prisoners from jails, gun confiscation, 90% taxes, trains to Hawai’i, and the other frightening platforms they embrace—that the American public will seem to come to their own conclusion that the democrats truly are the evil, unhinged, psychopathic party they appear to be.
Psychological operations are about perception. It’s all a psyop—just as the dark has used their tactics to get Humanity to scream for what they wanted us to with their Hegelian Dialectic of Problem-Reaction-Solution—we are seeing the same tactic used to get Americans to willingly reject the dimms and follow Trump. No mind-altering drugs required.
The democrats and their platform is the problem. It’s painfully obvious they propose the exact opposite of what any thinking person would want.
We see the reaction on social media, videos and blogs and in conversation to the behaviour of the Left. The patriots are wearing MAGA hats, T-shirts, installing window decals, and attending rallies and casting their votes at the elections. We also see the propaganda machine psyops, lies, coverups and witch hunts.
The solution is President Trump and his administration (and in the background, the Alliance). They made it very simple. Either you want to make America great again, or you want to flush it down the toilet. Pick one. It’s a simple message, right?
We are seeing the beginnings of this Hegelian Dialectic process. The dark’s propaganda machine has shaped public opinion for decades but they went over the edge and in a very short time, QAnon and President Trump have proven that the media and the Liberal/Left are not to be trusted; that they are the enemy. The perception of the legacy media was altered forever.
Despite what the media would have us believe, Trump’s rallies are blockbuster hits. Last night again in El Paso—a carefully chosen location—where the people have been living with the stream of drug gangs and murderers coming through their town with the blessing of their corrupt LEOs, they had a small venue with roughly 10K people, the President said, and 30 – 40K fans outside watching and listening on Jumbotron screens.
President Trump uses that opportunity at rallies to connect directly with the People to his advantage—and ours. He bypasses the lamestream media and delivers the information voters need to decide for themselves what the situation in America is; what the Democrats propose and will do if they are in power, and what he and his administration will do if chosen to move forward with their plan to fix what is broken and return power to the People. 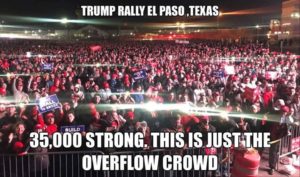 There’s no way for the media to spin what comes out of Donald Trump’s mouth, and thousands watched that speech on the Internet, too. Trump mentioned how Beto O’Rourke was having a rally in El Paso at the same time and joked about there being 15 people there. The only weapons the Alliance uses are words and legislation. They arm the People with information, and hell hath no fury like a nation scorned. Just ask the French.
The President’s State of the Union speech last week was closely monitored and polled and if any of the numbers were to be trusted, more Americans are seeing value in Trump’s initiatives and feel he has something to offer them—whether they like him or not. Now we see the poll claiming he has a 52% approval rating.
He’s trending. The Plan is working. Was Trump “chosen”? You bet he was. There aren’t many who could pull this off with such aplomb. It had to be someone who was not compromised, could not be bought, but bought into the Plan so they could play the role sincerely. It had to be someone with skin in the game. Donald Trump has a family he loves very much, and grandchildren with a bright future if he has anything to say about it.
The People know sincerity when they see it and hear it. They never got the truth from a president like this before. No president ever told them how the system was rigged; that they would never see an improvement if things continued the old way. No president ever named the enemy.
When he made that historic campaign speech, the one that would get Donald Trump elected, it was a direct connect. It resonated with millions of Americans because they knew it was true, and that he was sincere. He confirmed what many already knew: that Hillary Clinton made a habit of lying and that appalling deceptions had occurred in Washington.
Apparently our counterparts across the world felt it, too. This was different.

Patriots in other countries also love Trump. Their leaders mimic him. We have Brazil’s “Trump of the Tropics” and that parade in Italy this weekend was the most incredible thing I’ve ever seen.
Did you watch the short video of that jaw-dropping “God Emperor Trump” they made with the moving eyes? What the hell has come over the world? What is going on? You have to ask!
Someone in the parade even dressed up as a Trump super hero. This is no accident, as you may have surmised since Italy’s deputy prime minister met with Yellow Vest protestors in France recently. The Plan is global. The countries with “good guys” in power are edifying Trump. He has their stamp of approval and we’re beginning to see the Alliance congealing.

The Psyop is in play—but it’s a good psyop; a positive psyop. Just as the dark turns everything good inside out and makes it evil, the White Hats are doing the reverse. The unawakened don’t see it, but it’s part of the Plan.
Don’t parents use psychology on their children sometimes for their own good? That’s a psyop. They’re not always for nefarious purposes. We use psyops when training our pets. It works out better for everyone because we all get what we want and can live in harmony and safety.
You don’t have to be a Q follower to be a Trump follower, but as I watched the El Paso rally Trump made a point of saying he liked one of the signs but we didn’t see it and I wondered if it referenced Q.
Shortly thereafter an Anon posted this on the 8Chan board. 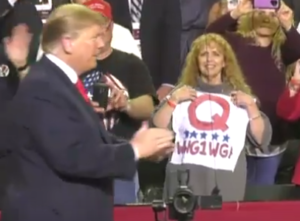 Anonymous 11 Feb 2019 – 8:56:46 PM – Not a T-shirt – she laid a square cloth with the Q on it when POTUS came by. PERFECT IDEA when they don’t allow Q shirts in.
Q or no Q, despite voter fraud, which will still happen in 2020 but to a lesser degree, the Allies have their men in place and will take the country by storm with candidates who will work for Humanity. I don’t think it will be a shutout, but we will gain great strides to increase the Republican contingent and block the negative components.
The freakazoid candidates will either self-destruct, or will turn out to be White Hats. I don’t think any inflammatory actions like arresting a candidate for their transgressions will occur prior, but anything’s possible. Perhaps a few will get rounded up if the mass arrests take place between now and then.

The good guys are also doing their best to enact legislation that will prevent the dead from voting (as may currently be happening in the Supreme Court right  now—but that’ s another story) and hopefully between the reduction in voter fraud, compromised voting machines and slick vote counting we will see an even bigger red tsunami in 2020. America learned that a great deal of voter fraud took place in the mid-terms and the patriots are watching very closely.
QAnon has said there is a Plan AND this is not a 4-year election. It’s a long-term plan, with many short-term victories that will roll into the ultimate objective of freeing America—and the planet.
In November 2020 when QAnon commands, “Vote! Vote! Vote!” you can bet America is going to do just that again and it will be a thing of beauty. We won’t hear any more of that nonsense about voting is just buying into their corrupt system and that we should stay home. That was the old system. There’s a new sheriff in town and the People have been given the power to choose with their vote. The People’s voices will be heard. 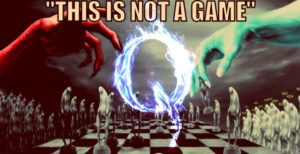 Q’s purpose was to wake people up who weren’t so far gone that they couldn’t see logic; to educate them and give them enough hope that they would educate themselves, have faith in the Plan, support President Trump, educate others, and ultimately get the American people to see reason and take their country back without even realizing the full impact of what they’re doing.They don’t have to see the big picture.
The goal can’t seem so massive that it’s impossible. Show them a series of foothills, not a mountain. By the time they climb the foothills, the mountain won’t seem so imposing.
Qanon hoped that we would understand why it must be done this way; and why it must unfold gradually. They tell us as much about the strategy as they can without compromising it, or the safety of the operatives.
The American people don’t all see the Grand Plan, and they don’t have to. Compartmentalization has it’s benefits. They just need to do their personal part to destroy the “democrat party” forever with their votes. Perhaps there will never be another president, or another party system, but we have to work with what we’ve got.
If you tried to change everything in America over night the People would revolt. They can’t handle that. The learning curve has to take place to open their minds to change and the dire need for it. They don’t know they’re slaves.


Judge Jeanine: The gap between the left and right has never been wider

OUT OF MIND » TRUTH IN CONSPIRACY THEORIES? » #QTARD DRAMA THEATER ARCHIVES » Why Trust the Plan? Is There a Plan?