Latest topics
» WTH – After Stealing the 2020 Election, Big Media Is Now Claiming Joe Biden Is Some Sort of Saint

NONE OF THE ABOVE 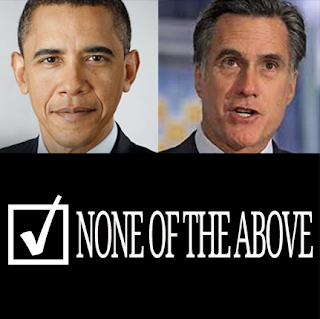 These debates are quite revealing at the level of contempt both parties
have for the intelligence of the American public. We are presented yet
again with the choice between lessor of two evils. And it all depends
on some contrived politics of left and right. Our battle is not with
our brothers of different opinions, its with those who set this false
agenda of non-change and central control. Its this kind of thing in the
American culture that caused me to create the name for this blog. This
is all pro forma dance of lies in an American Kabuki theater of American
politics.

The issues I really care about, financial health of this country,
individual freedom and privacy, are absent from each man's platform.
They both keep endorsing the George W Bush agenda. I voted for Obama in
2008, but GITMO is still there, the Patriot Act is still going strong,
the Government is still data mining the Internet and inventing ever more
lists to keep people from flying. Lack of privacy laws is now keeping
teenagers from getting into the schools of their choice because they
vented their teenage angst on Facebook. This is an Orwellian night
mare!

There has been no taming neo-con imperial agendas around the world by
the man I voted for. Rome-ny pledges to continue it. And even
congratulates his opponent for doing so the same! What kind of farce
choice is this? Where are the neocons now when it comes to providing
for our Veteran's needs? Oh yeah, they're just a bunch of "takers",
actually expecting their country to honor the limbs and health
they sacrificed in war. Politicians are all too eager to sacrifice the
lives of our children for their fame and careers.

Obama is certainly more intelligent that George W Bush was, but then so
is Romney. That's not difficult. What's disconcerting is that we are
asked to buy into this non-choice choice. "Well promise you anything
but nothing will change".

Oh yeah? How about we all don't vote for either one at all? Lets make
this a 33% turnout (a good Illuminati number) and give them
an electoral college version of Jury nullification. Sure, there's
no quorum rules in our democracy, but I tell you the world and our
military would certainly notice!

I know people will say "you'll get the choice you didn't vote for". But the truth is, I get that even if I do vote!

We have to do something massive soon in a peaceful manner to make our
displeasure known, and we don't have much time left before this election
comes to pass.