Classic sci-fi writer Jules Verne once imagined a whole subterranean landscape deep inside the planet, complete with lost prehistoric species and plant life. The book was aptly titled Journey to the Centre of the Earth. Now, a new research is revealing features in the underworld resembling structures on the surface. Far from a bubbling hot mess, there are mountains deep below rivalling anything up here… Yes, there’s a chance that these mountains are bigger than anything on the surface of the Earth… So taller than the Everest! Scientitst were able to determine the roughness at the top and bottom of the transition zone, a layer within the mantle, using scattered earthquake waves. They found that the top of the transition zone, a layer located 410 kilometers down, is mostly smooth, but the base of the transition zone, 660 km down, in some places is much rougher than the global surface average. “In other words, stronger topography than the Rocky Mountains or the Appalachians is present at the 660-km boundary.
Geophysicists from Princeton University in the US and the Chinese Academy of Sciences used the echoes of a massive earthquake that struck Bolivia two decades ago to piece together the topography deep beneath the surface.

On 9 June 1994, an 8.2 magnitude tremor rocked a sparsely populated region of the Amazon in Bolivia. Nothing this powerful had been seen in decades, with shocks being felt as far away as Canada.
“Earthquakes this big don’t come along very often,” says geoscientist Jessica Irving.
Not only was it big, it was deep, with a focal point estimated at a depth of just under 650 kilometres (about 400 miles). Unlike quakes that grind through the crust, the energy from these monsters can shake the whole mantle like a bowl of jelly. Using wave data from a 8.2 magnitude earthquake in Bolivia, mountains were discovered at the transition zone in layer in Earth Mantle.
The tremor happened to be one of the first to be measured on a modern seismic network, providing researchers with unprecedented recordings of waves bouncing through our planet’s interior.

Just like the soundwaves from an ultrasound can reveal differences in the density of tissue inside a body, the huge waves pulsing through Earth’s molten guts as its crust shudders and grinds against itself can be used to put together an image of what’s down there.
Only recently geoscientists used signatures in these waves to determine the rigidity of the planet’s core.
In this instance, the researchers took advantage of the 1994 quake’s intensity to detect waves scattering as they transitioned between layers, revealing details of the boundaries.
“We know that almost all objects have surface roughness and therefore scatter light. That’s why we can see these objects – the scattering waves carry the information about the surface’s roughness,” says lead author Wenbo Wu, a geoscientist at the California Institute of Technology.

Topography above and below the transition zone. via Science via [url=https://www.google.com/imgres?imgurl=http%3A%2F%2Fscience.sciencemag.org%2Fcontent%2Fsci%2F363%2F6428%2F736%2FF1.medium.gif&imgrefurl=http%3A%2F%2Fscience.sciencemag.org%2Fcontent%2F363%2F6428%2F736%2Ftab-figures-data&docid=42F95wda_OdkOM&tbnid=FZE8ZuzCzb4JiM%3A&vet=10ahUKEwj63KSJ-cDgAhWqmIsKHUo6A78QMwg_KAAwAA..i&w=440&h=301&bih=674&biw=1536&q=Inferring Earth%E2%80%99s discontinuous chemical layering from the 660-kilometer boundary]Google[/url]
“In this study, we investigated scattered seismic waves travelling inside the Earth to constrain the roughness of the Earth’s 660 kilometre boundary.“
At this depth there’s a division between the more rigid lower parts of the mantle and an upper zone that isn’t under quite as much pressure, one that creates a discontinuity marked by the appearance of various minerals.
The deepest hole we’ve ever dug is a paltry 12 kilometres (7.5 miles) deep, so without a Jules Verne scale tunnel to drop us down there, we’ve had no idea what this transition zone looks like. Until now.

The transition zone and implications

Based on those all-important waves coursing through the boundary, the researchers have concluded the meeting point between the mantle’s upper and lower parts is a zig-zagging mountain range that puts anything on the surface to shame.
“In other words, stronger topography than the Rocky Mountains or the Appalachians is present at the 660 kilometre boundary,” says Wu.
Their statistical model didn’t allow for precise height determinations, but there’s a chance that these mountains are bigger than anything on the surface of the Earth. 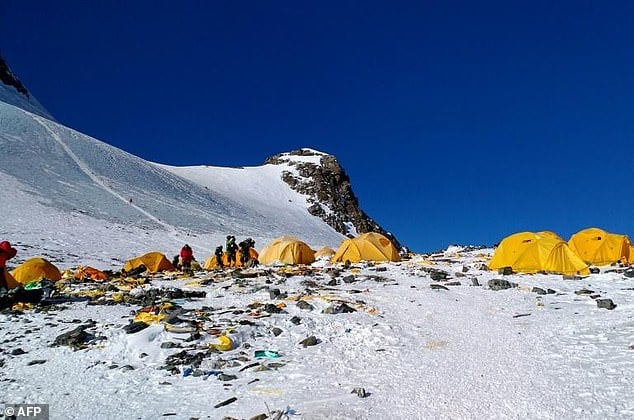 An underground mountain range has been discovered that lies 410 miles beneath the Earth’s surface that’s taller than Everest (pictured), and possibly than any structure on Earth. via AFP
This jagged line has significant implications for Earth’s formation. Most of our planet’s mass consists of mantle, so knowing how it mixes and changes by transferring heat informs us of how it evolves over time.
Different takes on the evidence have produced competing models on how minerals flow and churn within the pressurised rock, some saying it’s well-mixed, others suggesting there’s interference at the border.

Earthquake waves show similar patterns… A huge mountain range was discovered underground. By Science via [url=https://www.google.com/imgres?imgurl=http%3A%2F%2Fscience.sciencemag.org%2Fcontent%2Fsci%2F363%2F6428%2F736%2FF3.medium.gif&imgrefurl=http%3A%2F%2Fwww.sciencemag.org%2Freports%2Finferring-earth-s-discontinuous-chemical-layering-660-kilometer-boundary-topography&docid=jiFEZ0o1xfpEiM&tbnid=W8Uj8hJtttzdhM%3A&vet=10ahUKEwj63KSJ-cDgAhWqmIsKHUo6A78QMwhBKAEwAQ..i&w=440&h=339&bih=674&biw=1536&q=Inferring Earth%E2%80%99s discontinuous chemical layering from the 660-kilometer boundary]Google[/url]
Knowing the details of this subterranean mountain could decide the fate of various models describing the history of our planet’s ever-changing geology.
“What’s exciting about these results is that they give us new information to understand the fate of ancient tectonic plates which have descended into the mantle, and where ancient mantle material might still reside,” says Irving.
It might not be an easy place to explore. And forget the mastodons and giant insects. But the lost world under our feet still holds clues about our past if we know where to look.

» Mystery at the sun’s south pole: Nasa reveals huge ‘coronal hole’ on the solar surface where winds reach 500 miles per SECOND
» ‘Cannibal CME’ from Huge Explosion on Surface of Sun Is about to Hit Earth
» Antarctica base hidden in mountain range?
» Spherical object flying over mountain range Arizona
» Incredible Raw Footage Of 8.2 Earthquake And Tsunami In Chile-A Bigger 9.0 Earthquake Due Soon (Video)