OUT OF MIND » CHANGING ENVIRONMENT & NATURE » GUIDE TO THE NIGHT SKY » Quietly, Regulus ushers in springtime


Regulus, brightest star in Leo the Lion, is now rising in the east after sunset. You might not notice it, but stargazers know that, when Regulus appears in this way, spring is near. Regulus and Leo I dwarf galaxy. Image via Russell Croman.
Regulus is one of our sky’s brightest stars, and the brightest star in the constellation constellation Leo the Lion. This blue-white beauty of a star represents the Lion’s heart. In early March, most of us are still drawn toward the prominent constellations of our Northern Hemisphere winter (Southern Hemisphere summer) such as Orion the Hunter. Yet Regulus is up now, too, ascending in the east as the stars of winter begin their seasonal descent in the west each evening. Seeing Regulus rise into the eastern sky at this time of year can only mean – for us in the Northern Hemisphere – that spring is near.
Regulus can be found marking the bottom of a large backwards question mark star pattern within Leo, known as The Sickle. The Sickle – with Regulus at its heart – outlines the constellation Leo the Lion’s head and forequarters. 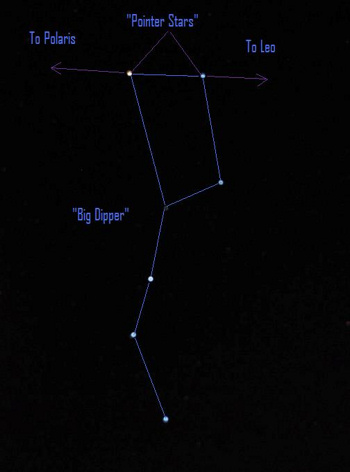 An imaginary line drawn between the pointer stars in the Big Dipper – the 2 outer stars in the Dipper’s bowl – points in one direction toward Polaris, the North Star, and in the opposite direction toward Leo.
Regulus is the only 1st-magnitude star to sit almost squarely on the ecliptic, which marks the path of the sun, moon and planets across our sky. That means it can be seen from the entire Earth.
Bright planets sometimes pass near Regulus, and every month the moon passes no more than about five degrees away. In some years, the moon occults (passes in front of) this star as seen from our earthly vantage point. In fact, Regulus just underwent a series of occultations – one during each month that this star was visible – starting on December 18, 2016, and concluding on April 24, 2018. 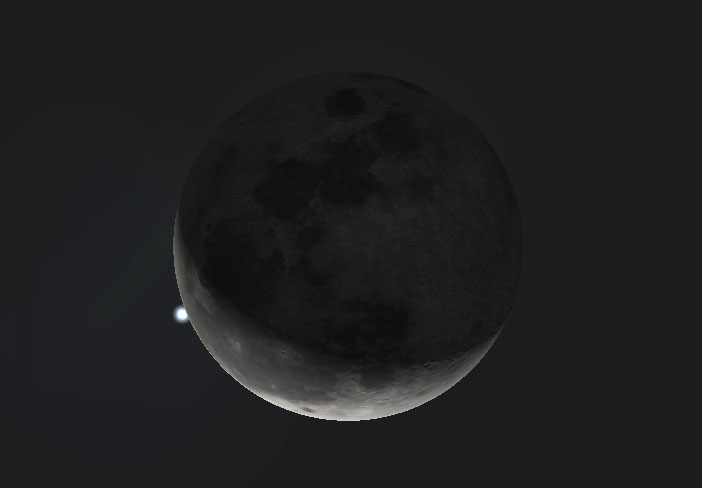 Artist’s concept of a particularly dramatic occultation of the star Regulus by the moon, via AstroBob.
Regulus is about 77 light-years away. It’s about four times as wide and 140 times as bright as our sun. If – by some impossible magic – Regulus were to replace our sun, Earth’s atmosphere would be stripped away, and shortly thereafter the oceans would begin to boil. That’s not to mention the vastly increased bombardment of ultraviolet rays, X-rays and gamma rays. Taking all of the star’s radiation into account, Regulus pumps out nearly 350 times as much energy as our sun.
Regulus rotates, or spins, rapidly. Our sun takes about a month to spin around once on its axis, but Regulus completes a single rotation in only 15.9 hours. This rapid rotation rate causes Regulus’s equatorial regions to bulge, making the star not round like our sun but oblate, like a squashed orange.
If Regulus rotated slightly more rapidly (16 percent faster), the star would fly apart. Regulus is not the only star known to spin so fast that it has an oblate shape. The stars Altair and Achernar are also fast spinners with flattened shapes. Regulus is a much larger star than our sun. Image via The Night Sky Guy.
What’s more, Regulus is a double star with a telescopically visible companion orbiting at about 100 times as far from Regulus as Pluto is from the sun. In fact, the companion itself is double, each component slightly smaller than our star and separated by about 95 astronomical units (95 Earth-sun distances), or more than twice as far as Pluto from the sun.
In addition, a very small star – likely a white dwarf – circles Regulus at about the same distance as Mercury from the sun. So this is not one solitary star as the eye believes, but at least four.
Overall, Regulus is a very hot star of spectral type B7V, meaning that it is much hotter than our sun, with a surface temperature that averages about 12,000 Kelvin (roughly 21,000 degrees Fahrenheit or 11,727 Celsiun). Very hot stars like this use up their nuclear fuel at a phenomenal rate, far faster than smaller stars like our sun. Thus the sun has an expected lifetime of about 10 billion years; it is about halfway through its life now. Meanwhile, hotter Regulus is likely only a few hundred million years old, but it is rapidly approaching its own death throes. The constellation Leo, with the star Regulus at its heart, as depicted on a set of constellation cards published in London c.1825. Image via Wikimedia Commons.
The name Regulus is from the diminutive form of the Latin rex, and means Little King. Astronomers know Regulus as Alpha Leonis, but in times past it has been known simply as Rex, as well as by kingly names in other languages. It’s not clear how Regulus went from being a king – thought to rule celestial affairs – to being a “little” king. Perhaps the thought was that Leo itself represented the King of Beasts, and there was room for one full king only.
Regulus has also been called Cor Leonis, which means Heart of the Lion, the same name given to Richard the Lionhearted (although more frequently in French).
The constellation Leo the Lion, of which Regulus is the most prominent member, is easy to visualize. As mentioned previously, Regulus dots the backwards question mark of stars that outlines the Lion’s head and mane. An easily identifiable triangle depicts the Lion’s hindquarters and tail. There is a great deal of mythology associated with Leo, perhaps the most common tale being that Leo was the Nemean Lion of the Hercules story. It is said that even in South America, some Peruvian Indians knew these stars as the Mountain Lion, whereas in China it was sometimes seen as a horse, and at other times as part of a dragon. Christians in the Middle Ages sometimes referred to it as one of Daniel’s Lions.
Regulus’ position is RA: 10h 08m 23s, dec: +11° 58′ 02″.
Bottom line: Regulus is the brightest star in the constellation Leo the Lion.

OUT OF MIND » CHANGING ENVIRONMENT & NATURE » GUIDE TO THE NIGHT SKY » Quietly, Regulus ushers in springtime

» Now the floods! From colder than the Antarctic to Springtime in a couple of days
» Henbit and Purple Dead Nettle, Two Springtime Wild Edibles
» Tonight The Crescent Moon Meets Regulus, The Brightest Star In Leo
» Skywatching: Moon-Regulus at the Evening - Mars, Arcturus and Spica Before Sunrise
» Interstellar Comet 2I/Borisov, Moon, Mars and the Bright Stars Regulus & Spica