Latest topics
» Truth is Not a Conspiracy

‘Sea Of Plastic’ Discovered In The Caribbean Stretches Miles And Is Choking Wildlife Wed Feb 20, 2019 4:07 pm

‘Sea Of Plastic’ Discovered In The Caribbean Stretches Miles And Is Choking Wildlife
Posted on 2018/11/14
Tags: Animal Welfare, Conservation, Sustainability

How often do you use plastic? If you compare to the average consumer, you might answer “every day.” Yes, items that contain plastic are convenient — and cheap. But, the manmade material is wreaking havoc on our planet. Images captured last year off the Honduran island of Roatan by photographer Caroline Power illuminate this fact.


The photos that follow were taken off an idyllic island that is usually compared to paradise. In the past few years, however, this image has been ruined by a “sea of plastic.” Once, the waters were clear and icy blue. Now, they are congested and filled with pollution.
Powers and a dive team passed through the floating trash for “nearly five miles.” In one area, the “sea of plastic” was merely two miles wide. Some of the items they found include broken footballs, soda bottles, toothbrushes, an abandoned television, and shoes.
In an email, Powers noted that the country of Honduras is not solely to blame for the river of plastic near its shores. She pointed out that the average person in every country, worldwide, lives unsustainable and has learned to throw out goods which might be reused, sold, recycled, or refurbished. It’s a mindset that needs to change, and her photographs are helping consumers re-think their habits. 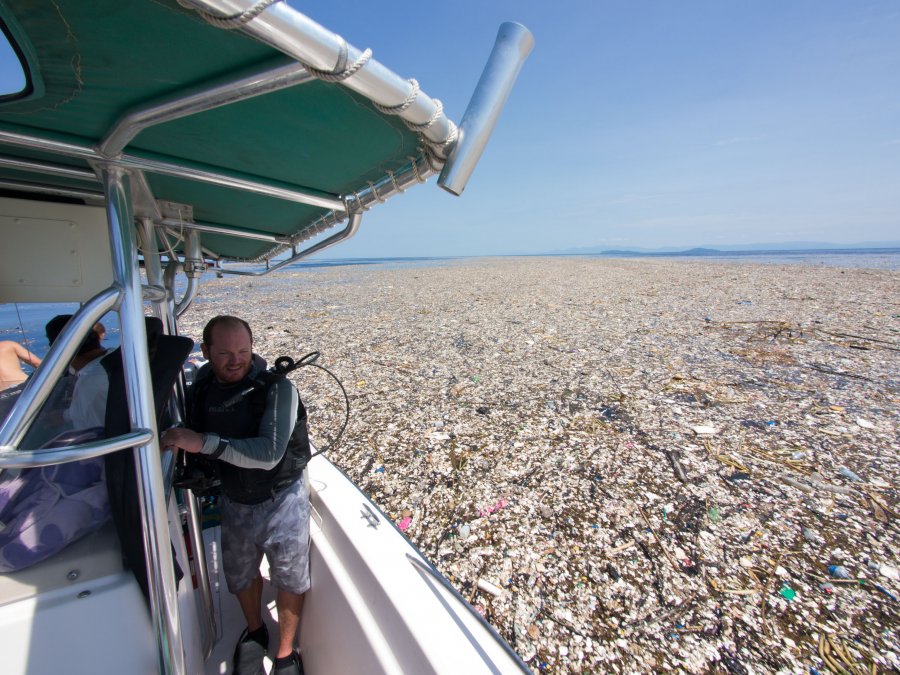 After snapping the images, Powers posted them to social media along with a plea for help:

“THIS HAS TO STOP. Think about your daily lives,” she wrote on Facebook. “How did you take your food to go last time you ate out? How was your last street food served?”
“Chances are it was styrofoam and served with a plastic fork and then put in a plastic bag. Do you still use plastic garbage bags?” Powers continued. “Plastic soda bottles? Ziplock bags? Plastic wrap on your food? Do you buy toilet paper that comes wrapped in plastic instead of paper? Do you put your fruit and veggies in produce bags at the grocery?” Check out this video:

The activist’s primary objective is to raise awareness about the world’s polluted oceans. It is for this reason that she has foregone payment for the images and, instead, has asked news outlets and publications to donate to the Roatan Marine Park. “The Roatan Marine Park is our local non-profit organization that runs numerous conservation programs including an anti plastic campaign and environmental education programs,” she wrote in an email. Caroline also encourages readers of this story to donate to local non-profit organisations that combat plastic pollution and fight to protect marine life.
“To see something that I care so deeply for being killed, slowly choked to death by human waste was devastating,” Powers told The Telegraph. “This is a developed nation (first world) problem as well.”