Federal Government Moves to Restrict Vaccine Exemptions as they Pay Out Billions of Dollars for Vaccine Injuries and Deaths Fri Feb 22, 2019 10:16 am 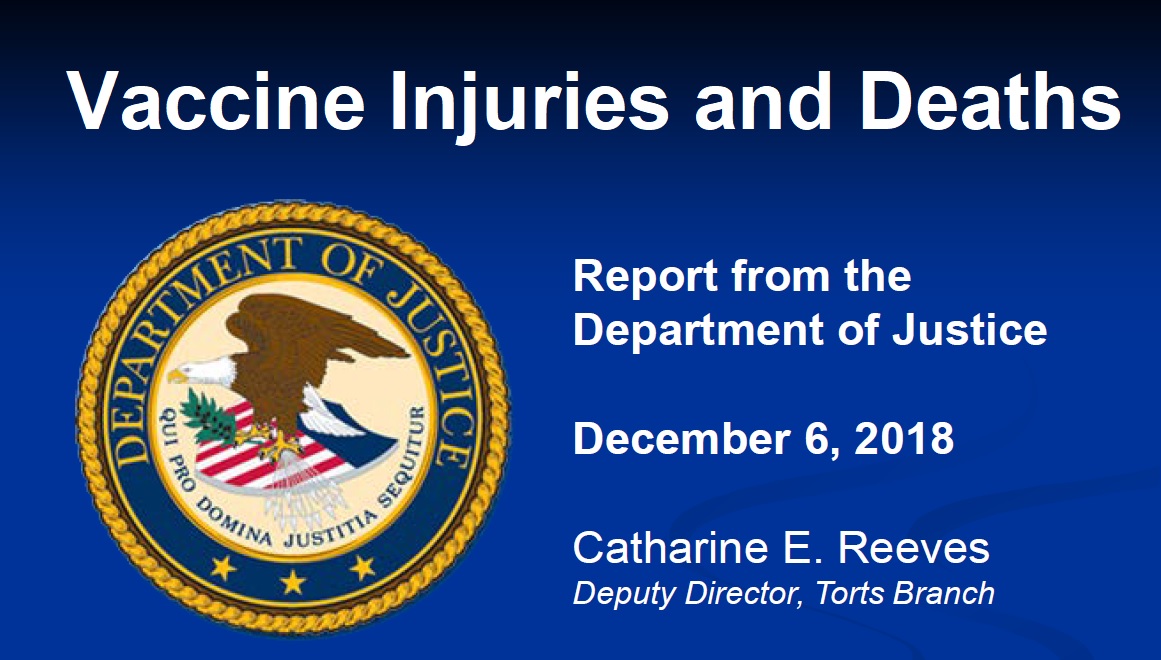 Every three months the Department of Justice issues a report on vaccine injury and death payouts. Latest report here.
URGENT: Feds Aim to End Vax Exemptions
by Alliance for Natural Health
Some federal officials think vaccine exemptions are used too widely and want Congress to eliminate your right to choose! Action Alert!
In response to several measles outbreaks that have been reported across the US by the CDC, the Senate Health, Education, Labor, and Pensions Committee is planning to meet on March 5 to discuss vaccine-preventable diseases and efforts to boost vaccination rates and fight vaccine hesitancy.
A House subcommittee is holding a similar hearing next week.
Ahead of these hearings, FDA Commissioner Scott Gottlieb has warned states offering vaccine exemptions that the federal government may intervene.
This attack on exemptions is unprecedented. We must ensure that Congressional members are properly educated about the numerous safety issues that have been demonstrated. We must also respond in force to protect vaccine exemptions from federal interference.
We should say at the outset that to want safer vaccines is not “anti-vax.” Reasonable people can ask reasonable questions about vaccination—indeed, we must ask these questions given the risks that are involved.
For example, why must vaccines contain dangerous neurotoxins such as aluminum, formaldehyde, and even mercury?
When the government pays out billions of dollars over the years to families damaged by vaccines (see more on this below), we have a right to call for safer vaccines. Such sentiments are not “anti-vax,” but rather pro-safer vaccination.
Commissioner Gottlieb made a number of alarming remarks about exemptions. He said that states might “force the hand of the federal health agencies” if they continue to allow vaccine exemptions amid disease outbreaks, and that he was “deeply skeptical” of exemptions that are not for medical reasons.
Gottlieb speculated that the federal government

“could mandate certain rules about what is and isn’t permissible when it comes to allowing people to have exemptions.”

It is deeply concerning that the head of the FDA appears so willing to trample the rights of individuals and to supersede state authority.
Under the Constitution, the US government has the authority to use police power to prevent those with serious communicable diseases from entering the US or transmitting disease across state borders.
Established legal precedents dating back to the early 20th century, however, leave vaccine and school admission policies up to the states, so if the federal government tried to interfere there would be strong grounds for a Constitutional challenge.
The danger is that the federal government could, perhaps, indirectly influence states to abandon non-medical exemptions through revoking funding for projects or other such means.
If we care about states’ rights and individual rights, we must vehemently oppose Gottlieb’s insinuations.
The assumption, of course, is that unvaccinated children contract a disease and spread it to other children who may or may not have been vaccinated.
As we’ve pointed out in past instances of measles outbreaks, this is simply false. Experts found in 2015 that one in ten measles-vaccinated individuals were at risk of measles because of the waning effectiveness of the measles vaccine. Because of this health authorities are now suggesting booster shots for measles.
There have even been cases where measles was transmitted in a school with a documented immunization level of 100%. What this tells us is that vaccination is not as effective at preventing disease as the public is often led to believe. Multiple studies have shown that vaccinated kids, especially those recently vaccinated, can spread disease, because the vaccine contains a live virus (vaccines that contain the live virus include chicken pox, measles, rubella, nasal flu, polio, and smallpox).
The same goes for mumps. Unvaccinated kids were similarly blamed for a mumps outbreak in recent years, despite the CDC reporting that most mumps patients said they had received both shots of the MMR (measles, mumps, and rubella) vaccine.
It is pure propaganda to blame unvaccinated kids for these outbreaks. The goal seems to be the passage of laws that eliminate vaccine exemptions as California has done.
The tragedy is that, while states and apparently the federal government work to boost vaccine uptake, important questions about the safety of vaccines are swept under the rug.
In fact, federal health authorities exhibit a dogged determination not to investigate the safety of vaccines or work to make them safer.
The 1986 National Childhood Vaccination Injury Act shielded vaccine manufacturers from liability. Children harmed or killed by vaccines cannot sue the manufacturer.
This eliminates any incentive vaccine makers have to ensure their products are safe.
Instead, the 1986 Act set up a Vaccine Court funded by a tax on each vaccine sold to compensate victims of vaccines—but the process is an uphill battle for most victims that takes years and is often unsuccessful.
To date, the Vaccine Court has paid out $4 billion to victims.
Additionally, the US Department of Health was, according to the 1986 law, supposed to issue regular reports to Congress about what actions it was taking to make vaccines safer.
As of 2019, HHS has issued exactly ZERO of these reports to Congress.
This revelation came about as the result of a Freedom of Information Act request from the Informed Consent Action Network (ICAN).
For three decades, HHS has been breaking the law. It is one example among many of how HHS almost exclusively prioritizes its mandate to increase vaccination rates over the goal of vaccine safety.
Another example is the shockingly deficient pre-licensure safety review of vaccines. In drug trials, a group of subjects who take the drug under study is compared to a group of subjects on an inert placebo, like a saline injection or a sugar pill. This way the rate of adverse events for the drug can be more accurately assessed.
Trials to determine a vaccine’s safety, by contrast, almost never use placebos. Without placebo controls, it is impossible to accurately determine a vaccine’s safety profile.
Other vaccines are then approved by HHS as long as they have a similar adverse event rate as a previous vaccine, creating a “pyramid scheme” of safety.
HHS defends this absurd policy by arguing that it would be unethical to have inert controls—some kids in the trials would go unvaccinated for the duration of the trial, after all.
HHS apparently sees no ethical problem with injecting millions of children with vaccines that have not been properly assessed for safety.
Additionally, most vaccines are approved with inadequate follow-up periods of a few days or weeks; drug trials follow subjects for months or years to better determine the dangers and potential adverse events.
It is irresponsible for Congress and public health authorities to be discussing ways to increase vaccination rates without also taking the idea of vaccine safety seriously; it is unconscionable that Commissioner Gottlieb is calling for the elimination of exemptions given the safety record of vaccines.
We also know that adverse events from vaccines are underreported by a large margin—some experts say as little as one percent of vaccine adverse events are actually reported.
Adjusting for this underreporting, since 2005 FDA-approved vaccines have caused 3,213,700 serious adverse events and 367,000 deaths.
It’s time to stop blaming unvaccinated children for disease outbreaks and for HHS to start doing its job to ensure vaccines are as safe as possible.
Action Alert! Write to Congress, the FDA, and CDC, telling them to stop discussing mandates and that HHS must comply with the law by issuing reports detailing what is being done to make vaccines safer. Please send your message immediately.
Read the full article at ANH-USA.org.

Re: Federal Government Moves to Restrict Vaccine Exemptions as they Pay Out Billions of Dollars for Vaccine Injuries and Deaths Fri Feb 22, 2019 4:37 pm