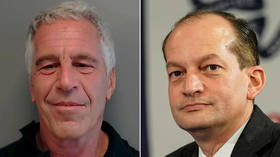 A Florida judge has ruled financier Jeffrey Epstein’s sex trafficking case was grossly mishandled by federal prosecutors, who hid a sweetheart plea deal from over 30 of his underage victims, violating federal law in the process.
“Epstein worked in concert with others to obtain minors not only for his own sexual gratification, but also for the sexual gratification of others,” US District Judge Kenneth Marra wrote in a ruling that found federal prosecutors had violated the Crime Victims’ Rights Act by concealing Epstein’s plea deal from his victims, who could have contested the non-prosecution agreement that saw the hedge-funder spend just 13 months in an open-door ‘prison’ for abusing hundreds of underage girls.
Also on rt.com Pedophile football referee charged with molesting over 300 boys in Norway's biggest sex abuse case
Federal prosecutors, led by then-Southern District Attorney for Florida Alexander Acosta, now the Trump administration’s Secretary of Labor, colluded with Epstein’s lawyers to conceal both the sentencing agreement and the scope of his crimes from victims and the public, Marra said, while victims were misled into thinking they still had a chance to be heard in court.
Evidence –enough “to fill a 53-page indictment with federal sex-crime charges”– confirmed Epstein and his employees had been recruiting girls from as close as Florida and as far as Eastern Europe to sexually service the financier and his rich and powerful friends, Marra said. Those friends reportedly included Bill Clinton, Donald Trump, Prince Andrew, Alan Dershowitz, and other movers and shakers in business, law, finance, and government.
Also on rt.com Epstein pedophile scandal: Prince Andrew at risk once more as new court case begins
The judge did not issue a punishment, instead setting a 15-day deadline for victims and the government to decide on a resolution moving forward. As much as many of Epstein’s victims still want him jailed, even prosecuting attorney Brad Edwards admits the non-prosecution agreement is unlikely to be overturned.
Should other victims step forward in other jurisdictions, however, Epstein can still be prosecuted – there is no statute of limitations for sex trafficking.
“Instead of admitting what they did, and doing the right thing, [the government] spent 11 years fighting these girls,” Edwards said.
“This was probably the most unjust outcome of any case I’ve been involved in in 40 years,” Michael Reiter, former Palm Beach police chief, told the Miami Herald.
Also on rt.com Prepare for ‘divine justice’: Pope Francis calls on abusive priests to hand themselves in
The US Justice Department is conducting its own probe of whether federal prosecutors were guilty of wrongdoing. A representative for Acosta’s Department of Labor told CNBC that “the office’s decisions were approved by departmental leadership and followed departmental procedures.”
Like this story? Share it with a friend!