Latest topics
» What is going on in the skies above America? Mysterious Lights Spotted In The Sky Near Sacramento

Could we soon be able to detect cancer in 10 minutes?

About seven years ago, researchers at the US DNA sequencing company Illumina started to notice something odd. A new blood test it ran on 125,000 expectant mothers looking for genetic abnormalities such as Down’s syndrome in their foetuses returned some extremely unexpected signals in 10 cases. Chillingly, it dawned on them that the abnormal DNA they were seeing wasn’t from the foetuses but was, rather, undiagnosed cancer in the mothers. Cancers of different types were later confirmed in all 10. “This was not a test developed for cancer screening,” says Alex Aravanis, then Illumina’s senior R&D director. “But it was evidence that it might be possible.”
In 2016, Illumina created Silicon Valley-based spin-off company Grail, with Aravanis as chief scientific officer. Backed by more than $1.5bn in funding, including money from Microsoft cofounder Bill Gates and Amazon founder Jeff Bezos, Grail is on a quest to detect multiple types of cancer before symptoms, via a single, simple blood test. The test looks at cell-free plasma to find fragments of so-called circulating tumour DNA (ctDNA) sloughed off by cancer cells.
Detecting cancer sooner – before symptoms – means you can intervene earlier and people are less likely to die. While doctors can screen for breast, colon and lung cancer, most varieties of the disease can only be detected after symptoms appear. And though it is far from the only approach, the beauty of blood is that it is minimally invasive to collect. “A relatively simple blood-based test that can screen for evidence of cancer… might improve or even replace some screening programmes over time,” says Jacqui Shaw, professor of translational cancer genetics at the University of Leicester, who studies ctDNA.

Looking for ctDNA has become a viable proposition in recent years because of improvements in DNA sequencing technologies that make it possible to scan fragments and find those few with alterations that may indicate cancer. While other blood-based biomarkers are being investigated, the advantage of ctDNA is that, because it has a direct link to the tumour, it can be very specific at identifying cancer. For that reason, ctDNA is also showing promise as a way to profile and monitor advanced stage cancers, a “liquid biopsy”.
Early detection is a harder problem. Early on, when the tumour is small, there is not as much ctDNA to detect. The women Illumina identified as having cancer were all late, not early stage.
To date, there is one company offering a blood test based on ctDNA for early cancer detection: Epigenomics began offering its test for colon cancer in 2016 based on detecting biochemical modification of a single gene.
Report this ad
But the dream being imagined by Grail and others is an inexpensive test, perhaps no more than $500, which could conceivably be given annually to those over a certain age, with a high chance of detecting many cancers at once with high accuracy (Grail hasn’t announced a final number but thinks it will be in the region of 10). It’s a test that all of us, if it works, could one day get. “The big studies are still to be done,” says Nitzan Rosenfeld, a researcher who studies ctDNA at the Cancer Research UK Cambridge Institute and a cofounder of the UK-based liquid biopsy company Inivata, “but there has been considerable progress.”
Cancer essentially begins when a normal cell’s DNA gets mutated or altered. From that point, the cell multiplies too often and a mass or tumour of abnormal cells forms. A proportion of the cells invariably die and “shed” genetic material into the bloodstream, mixing with larger amounts of DNA fragments coming from the death of normal cells. 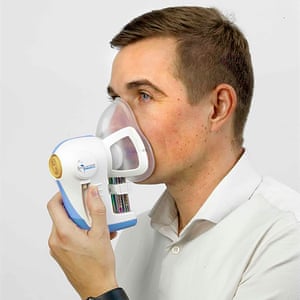 Facebook [url=https://twitter.com/intent/tweet?text=Could we soon be able to detect cancer in 10] Twitter [/url]
[url=http://www.pinterest.com/pin/create/button/?description=Could we soon be able to detect cancer in 10]Pinterest [/url]
A cancer breathalyser made by Owlstone Medical.
While blood is relatively easy to collect to look for a cancer signal, what about if you could detect it on breath – no needle required? UK-based company Owlstone Medical is among those looking to discover whether this is possible. It has developed a breathalyser based on the idea that there may be chemicals – volatile organic compounds – in breath indicative of early-stage cancer.
It is currently running a trial in partnership with the NHS to see whether there are differences in the chemicals that can be detected in breath between people with lung cancer and those without it. Lung cancer, says Max Allsworth, the company’s chief scientific officer, is a good place to start because the air we breathe directly moves through the lung and past any tumours.
The company has also recently started a separate, smaller study looking at whether six other cancer types may also be detected early in this way (in this case, the chemicals would find their way into the breath less directly, via blood, which exchanges volatile chemicals with air in the lungs). Depending on the trial results, it may end up being a more generic cancer detection test – not telling you specifically where the cancer is, but that a common signal has been found. In all cases, says Allsworth, if there are chemicals in breath that suggest cancer, they will be present very early on, before you are likely to have circulating tumour DNA (ctDNA).

… and we’d like to explain why. Our journalism now reaches record numbers around the world and more than a million people have supported our reporting. We continue to face financial challenges but, unlike many news organisations, we haven’t put up a paywall. We want our journalism to remain accessible to all, regardless of where they live or what they can afford.
This is The Guardian’s model for open, independent journalism: free for those who can’t afford it, supported by those who can. Readers’ support powers our work, safeguarding our essential editorial independence. This means the responsibility of protecting independent journalism is shared, enabling us all to feel empowered to bring about real change in the world. Your support gives Guardian journalists the time, space and freedom to report with tenacity and rigour, to shed light where others won’t. It emboldens us to challenge authority and question the status quo. And by keeping all of our journalism free and open to all, we can foster inclusivity, diversity, make space for debate, inspire conversation – so more people have access to accurate information with integrity at its heart.
Guardian journalism is rooted in facts with a progressive perspective on the world. We are editorially independent, meaning we set our own agenda. Our journalism is free from commercial bias and not influenced by billionaire owners, politicians or shareholders. No one steers our opinion. At a time when there are so few sources of information you can really trust, this is vital as it enables us to give a voice to those less heard, challenge the powerful and hold them to account. Your support means we can keep investigating and exploring the critical issues of our time.