A large, unknown Planet 9 in our solar system continues to elude astronomers. But a new review article in Physics Reports explains why some scientists still think they’ll find it. 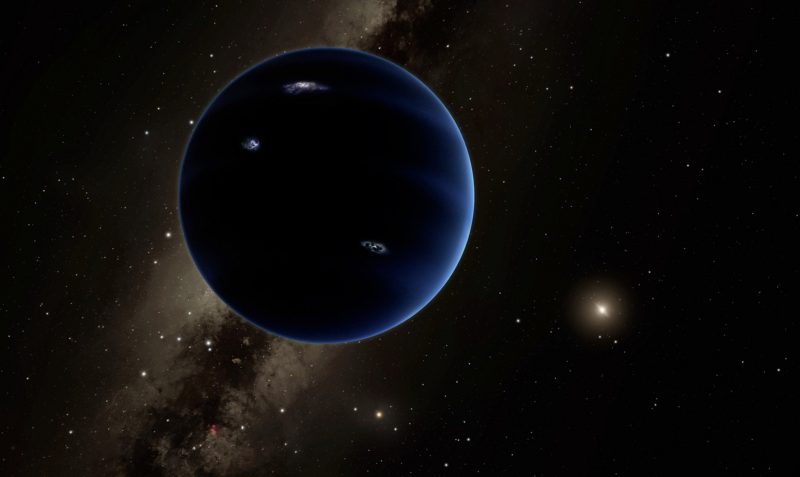 Artist’s concept of what Planet 9 might look like, if it exists. Image via R. Hurt (IPAC)/Caltech.
Does a large Planet 9 – a hypothesized planet several times the mass of Earth in the distant outer reaches of the solar system – really exist? That question is still a topic of heated debate among astronomers. Some think a large Planet 9 can explain the weird orbits of some of the smaller known bodies in the Kuiper Belt. Others think that those orbits might be caused by multiple unknown smaller bodies instead.
Several astronomers recently reviewed the evidence for Planet 9 in an article published in February 2019 by Physics Reports. This peer-reviewed journal aims to publish long and deep reviews – more extensive than just literature surveys – on timely topics in physics. The article is called The planet nine hypothesis, and the astronomers who wrote it are still very optimistic that Planet 9 will eventually be found and confirmed. According to co-author Fred Adams at the University of Michigan:

The strongest argument in favor of Planet 9 is that independent lines of evidence can all be explained by a proposed new planet with the same properties. In other words, there are multiple reasons to believe that Planet 9 is real, not just one.

From the review article in Physics Reports:

Over the course of the past two decades, observational surveys have unveiled the intricate orbital structure of the Kuiper Belt, a field of icy bodies orbiting the sun beyond Neptune. In addition to a host of readily-predictable orbital behavior, the emerging census of trans-Neptunian objects displays dynamical phenomena that cannot be accounted for by interactions with the known eight-planet solar system alone. Diagrams showing the calculated orbit of Planet 9 in the outer solar system – much farther out than Neptune – and estimated size compared to the other planets. Image via James Tuttle Keane/Caltech.
Planet 9 – so-called since Pluto is no longer officially considered a major planet – was first hypothesized by astronomers Konstantin Batygin and Mike Brown of Caltech three years ago. Its existence could explain the odd orbits of some objects in the Kuiper Belt known as trans-Neptunian objects (TNOs). The orbits of these small bodies are clustered together in a way that suggests to some astronomers that a larger and more distant world (a Planet 9) has been tugging on them with its relatively strong gravity.
Mike Brown explained that the new review paper does not prove Planet 9’s existence. But, he said:

… it does indicate that the hypothesis rests upon a solid foundation.

In a previous paper published on January 22, 2019, in The Astronomical Journal, astronomers calculated that the likelihood of Planet 9 not existing was only 1 in 500.
If real, Planet 9 is estimated to be about five to 10 times the mass of Earth, possibly making it similar to super-Earth-type exoplanets – larger than Earth but smaller than Neptune. If it exists, Planet 9 may be on an elongated orbit, taking it up to 400 times the distance of Earth from the sun; that is very far away! The orbit is also calculated to be 15 to 20 degrees off the main orbital plane in which most of the other planets orbit. The orbits of 6 extreme trans-Neptunian objects (in magenta) are mysteriously aligned in one direction, a configuration which can be explained by the presence of a Planet 9, according to some astronomers. Image via Caltech/R. Hurt (IPAC).
Planet 9 has not been easy to find – assuming it’s actually there – so how long might it be before it is finally found? Adams thinks that, within the next 10 to 15 years, astronomers will either confirm that Planet 9 exists or refute it via the data. He said:

With its proposed properties, Planet 9 is right on the edge of being observable. But this is a very dim object in a very big sky. Since we don’t know exactly where it is, you have to survey the whole sky, or at least large portions of it, in order to find the planet.
Over the course of the next 10 years, we will have deeper and deeper – which means more sensitive – sky surveys. So I think by 2030 we will have seen it or will have a better idea of where it is. Of course, it’s also possible that by then we could also have alternate explanations for the observed orbital anomalies.

Juliette Becker is a doctoral candidate from University of Michigan’s Department of Astronomy and a co-author on the new review paper about Planet 9. She thinks that discovering Planet 9 would help answer various mysteries in the solar system, including the origin of the rocky object labeled 2015 BP519 and nicknamed Caju. This object is one of the TNOs thought to be gravitationally affected by Planet 9. It is only 340 miles (550 kms) in diameter and is on a highly eccentric and inclined orbit. She said:

Planet 9 is a really good explanation for 2015 BP519. The physics works perfectly. However, until we see Planet 9 in an image and are sure it’s there, I don’t feel like we’ve truly solved the mystery of its origin. The presence of Planet 9 would beautifully and coherently answer several seemingly unrelated open questions about the solar system. I look forward to the day we either see it or rule it out so that we can conclusively answer these questions.

By the way, there is even a theory that Planet 9 might be an exoplanet – such as a super-Earth – that was “stolen” by the sun from a nearby star. So you see that astronomers truly are perplexed about the orbits of these outer solar system bodies. They are casting around for ideas to explain them.
If a Planet 9 is found, whatever its origin, it will be one of the most exciting space discoveries in history. Since Pluto lost its major planet status in 2006, Neptune has been considered the most distant large planet from the sun in our solar system. If that’s not the case, if another large planet – a Planet 9 – exists, it’ll provide astronomers with an unprecedented opportunity to learn more about how our solar system originated and evolved. 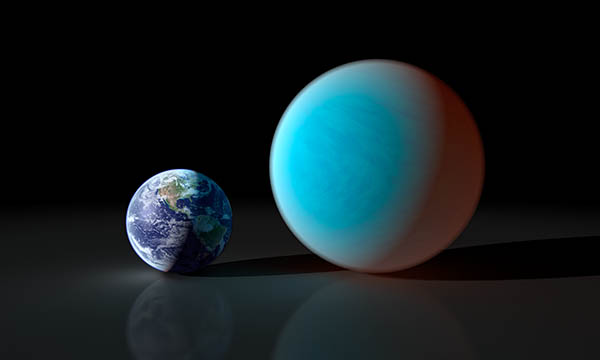 Artist’s concept of the size of Earth compared to the super-Earth 55 Cancri e. If Planet 9 exists, it may be similar to this distant exoplanet. Image via NASA/JPL-Caltech/R. Hurt (SSC).
Bottom line: Finding Planet 9 – if it really exists – is still a difficult task for astronomers, but the new study in Physics Reports reflects astronomers’ continued optimism that it will be found in the relatively near future.
Source: The planet nine hypothesis
Via University of Michigan