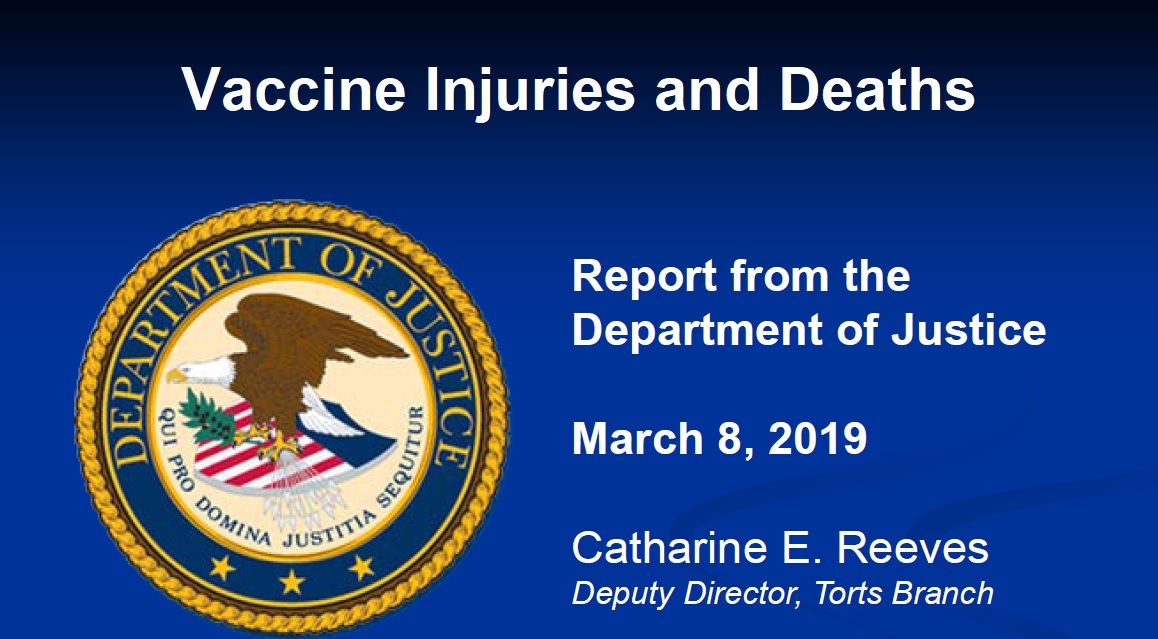 by Brian Shilhavy
Editor, Health Impact News
The federal government Advisory Commission on Childhood Vaccines (ACCV) under the U.S. Department of Health and Human Services just concluded their first meeting of 2019 on March 8th.
These quarterly meetings include a report from the Department of Justice (DOJ) on cases settled for vaccine injuries and deaths as mandated by the National Vaccine Injury Compensation Program (NVICP).
The NVICP was started as a result of a law passed in 1986 that gave pharmaceutical companies total legal immunity from being sued due to injuries and deaths resulting from vaccines.
Drug manufacturers in the vaccine market can now create as many new vaccines as they desire, with no risk of being sued if their product causes injury or death.
This has resulted in a huge increase of vaccines entering the market, and the U.S. government, through the Centers for Disease Control (CDC), is the largest purchaser of these vaccines, spending in excess of $5 billion taxpayer dollars each year to purchase these vaccines.
The CDC’s annual budget of $5 BILLION to purchase vaccines from pharmaceutical companies with American taxpayer funds, and the NVICP law which gives legal immunity to the pharmaceutical industry for injuries and deaths due to vaccines, are facts that are routinely censored and withheld from the public in the corporate-sponsored “mainstream” media, as well as in government legislative hearings that seek to mandate vaccines by force.
If you or a family member is injured or dies from vaccines, you must sue the federal government and go up against their attorneys in this special vaccine court.
Many cases are litigated for years before a settlement is reached, as can be seen from the report below. One flu shot victim litigated for 7 years before reaching a settlement, and one Gardasil HPV vaccine victim litigated for over 5 years before reaching a settlement, for example.
Another Gardasil HPV vaccine victim who suffered cardiac arrest and death, took over 3 years to settle.
As far as we know, Health Impact News is the only media source that publishes these DOJ reports on vaccine injuries and deaths each quarter. Past reports can be found here.
The March 8, 2019 report states that 307 petitions were filed during the 3-month time period between 11/16/18 – 2/15/19, with 153 cases being adjudicated and 125 cases compensated.
The DOJ report only lists 83 of these settlements for vaccine injuries and deaths.
The total amount of damages paid out by the U.S. Government so far in 2019 for vaccine injuries and deaths is over $110 MILLION. (Source.) 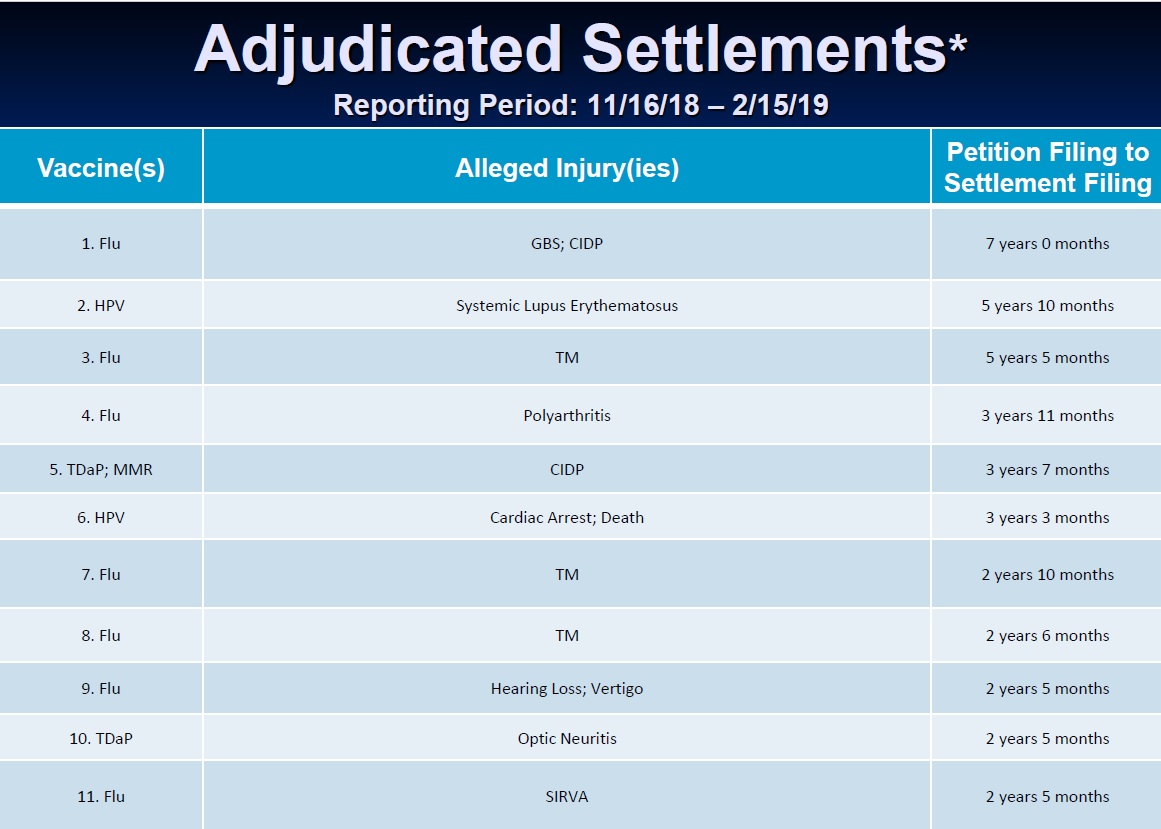 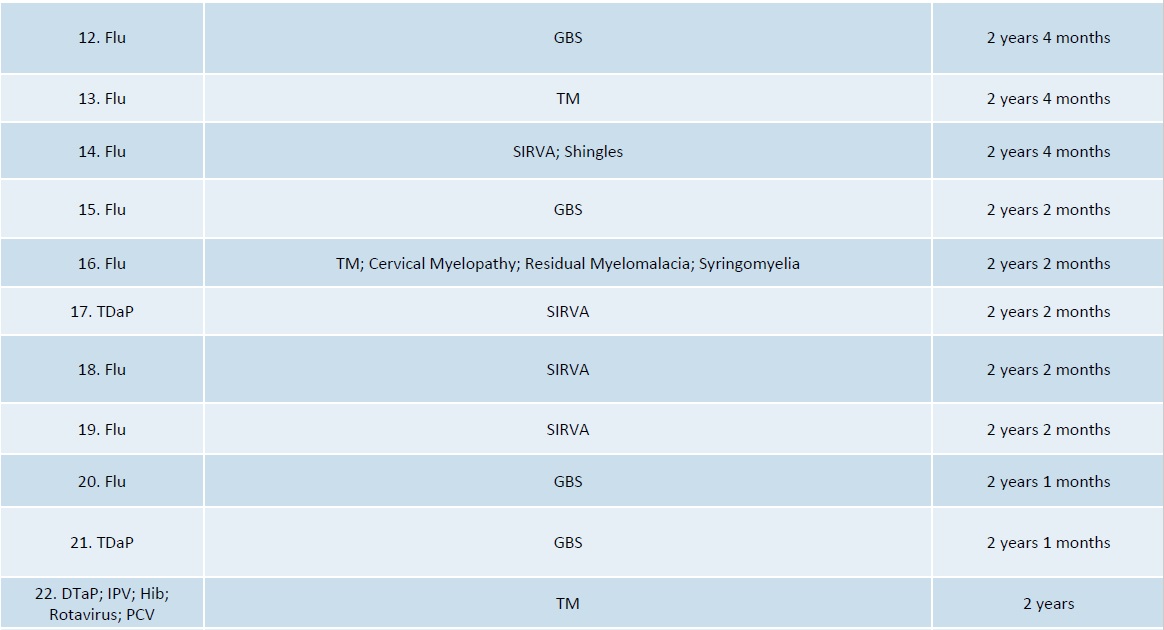 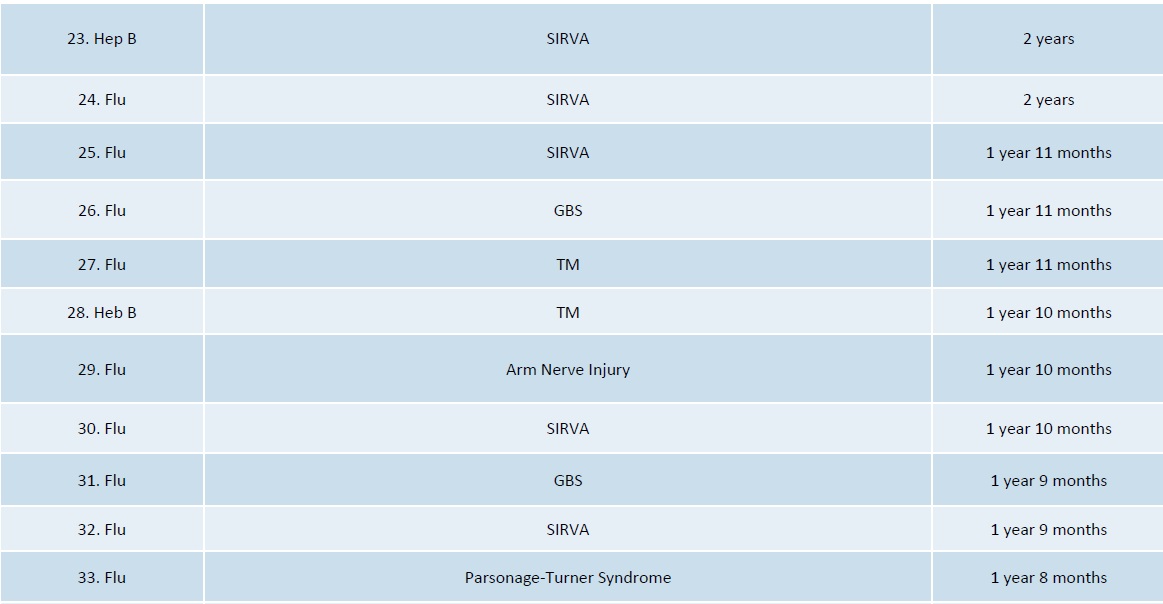 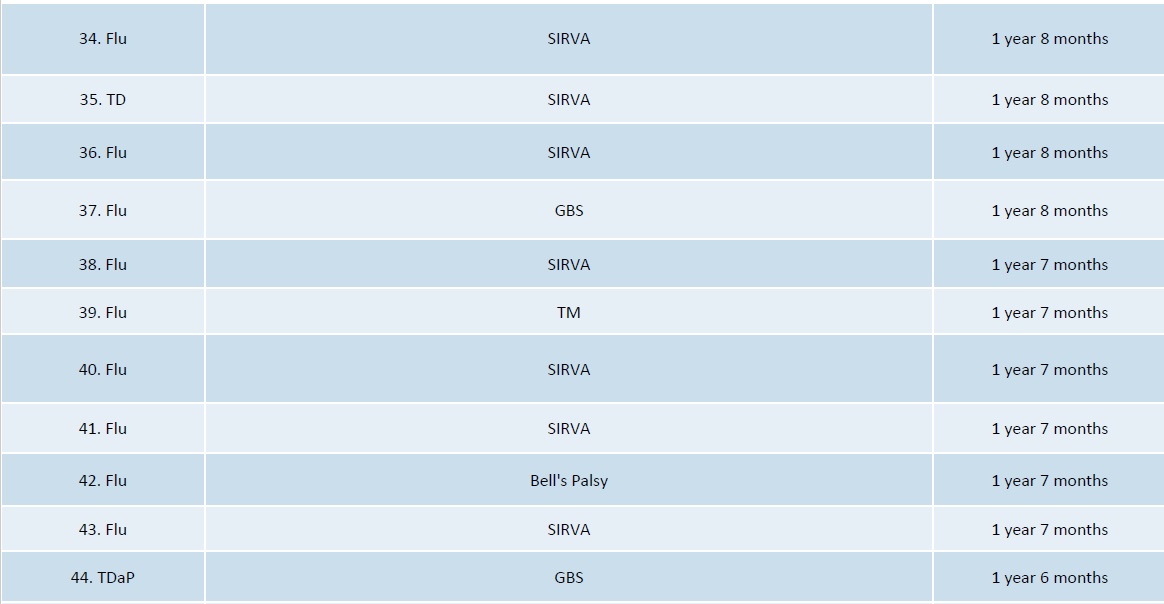 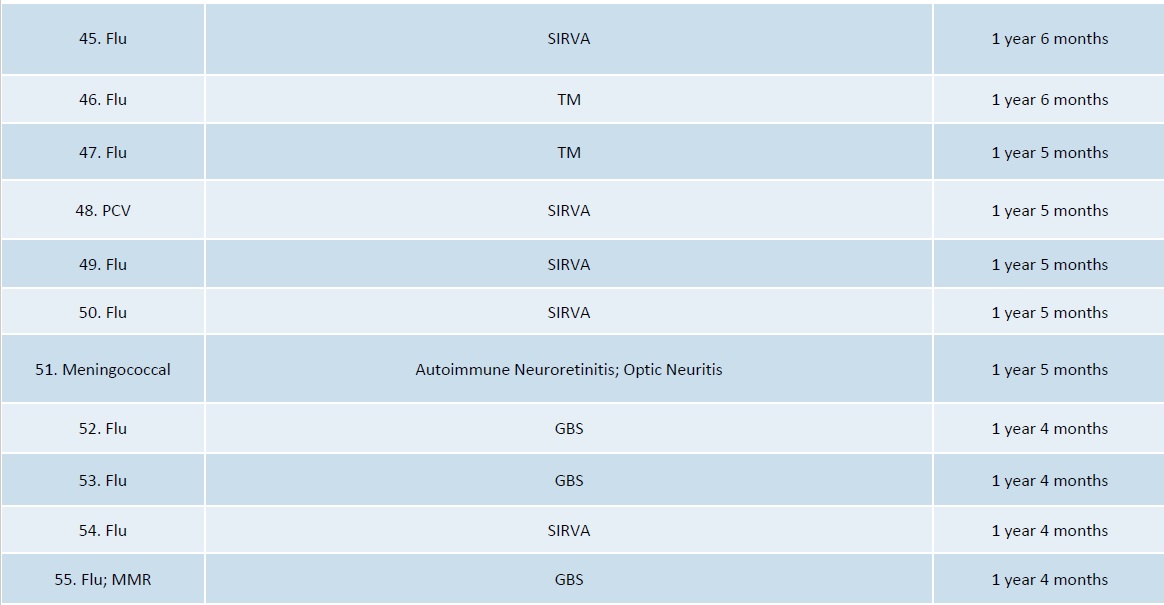 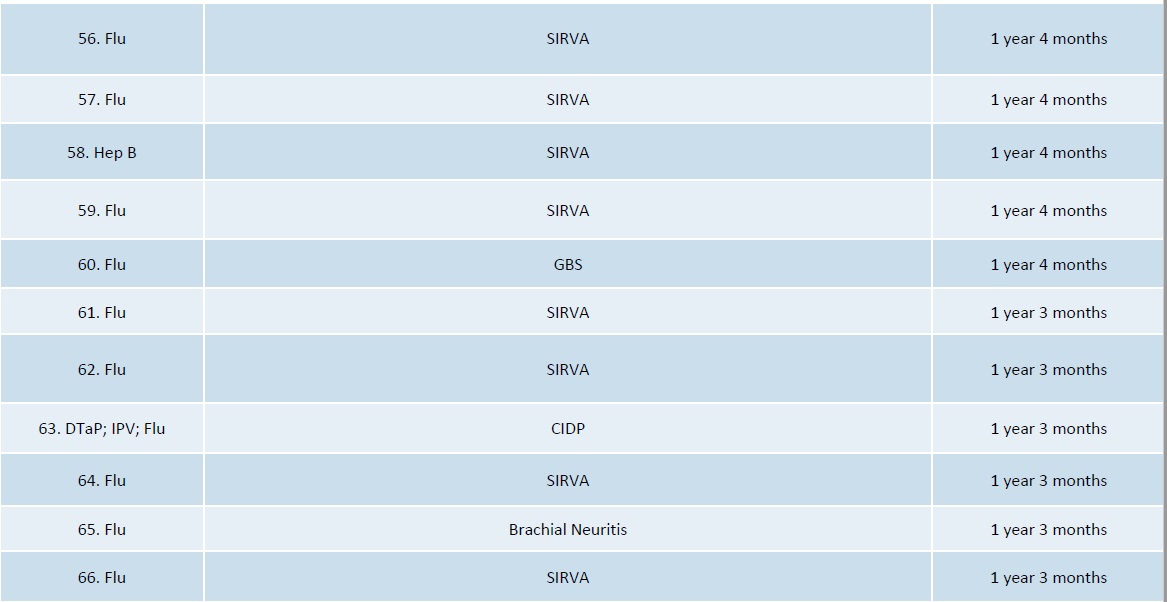 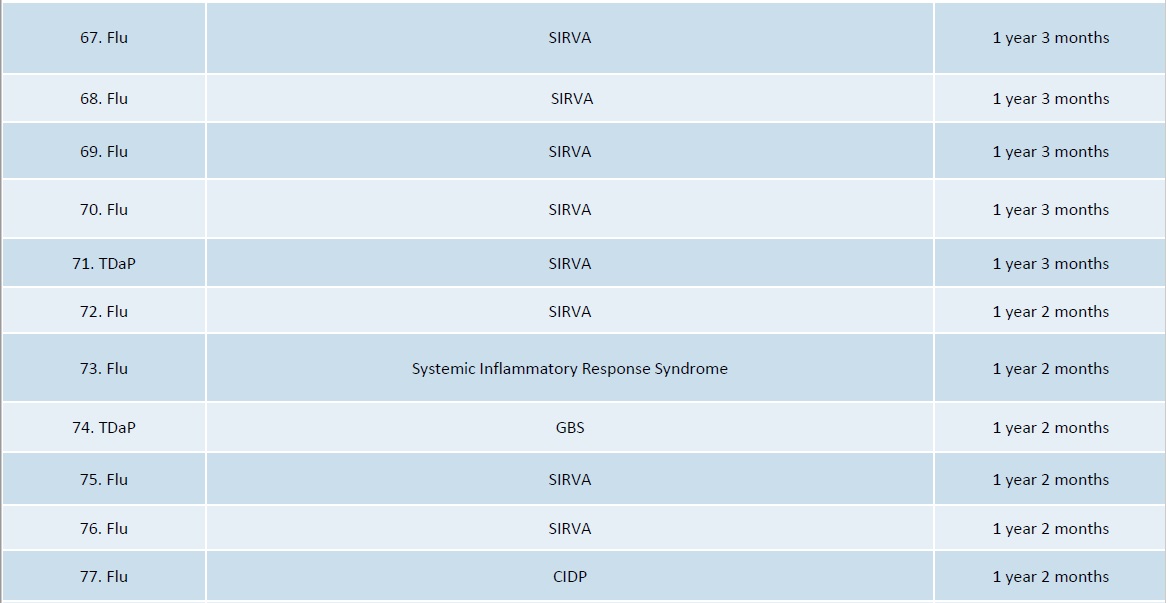 Mandatory Flu Shots on the Way?

67 of the 83 vaccine injury cases listed in this report were for the flu shot.
Currently, state legislatures across the country, as well as federal Congressional hearings the past two weeks, have considered mandating vaccines for childhood diseases based on a measles “outbreak” of about 130 people in 10 states over a several month period.
Only one person in the U.S. has died from the measles in the past 12 years, while the The Vaccine Adverse Event Reporting System (VAERS) lists hundreds of reported deaths due to the measles vaccine. See:

Since the CDC claims that tens of thousands of people die each year from the flu (although those claims are estimates, and not based on facts – see: Did 80,000 People Really Die from the Flu Last Year? Inflating Flu Death Estimates to Sell Flu Shots), is the next step in legislative mandatory vaccine efforts going to be mandating the flu vaccine for every American all in the name of “the greater good?”
Senator Rand Paul last week addressed this very issue, in voicing his opposition to government-forced vaccines:

As Senator Paul pointed out in his comments, the annual flu vaccine is based on a guess as to which strains will be most prevalent in the upcoming flu season, and in some years they are completely wrong.

In the video above, Dr. Mark Geier explains the fraud behind the flu vaccine.
Dr. Geier is NOT anti-vaccine. He is an M.D. and has a Ph.D. in genetics. He spent 10 years working at the National Institute of Health, and was a professor at Johns Hopkins University as a geneticist. He is also the author of over 150 peer-reviewed publications.
He worked on vaccine safety and efficacy for more than 30 years. He was one of four scientists that worked to replace the DTP vaccine, a vaccine that caused every child to become sick with a high fever at the time of vaccination, with the DTaP vaccine, which is a more purified vaccine and causes illness due to fever in only 3% of those vaccinated.
Dr. Geier explains that the flu shot causes Guillain-Barré Syndrome, and that the flu shot is not very effective in preventing the flu.
He also explains that the CDC does not follow the law for vaccines in requiring long-term safety testing for the influenza vaccine like they do with other vaccines, as it is impossible to test a vaccine that changes every year.
So the flu vaccine is basically an experimental vaccine that they want to give out to 300 million people every year. There are also no studies showing the safety of giving the flu vaccine to the same person every single year.
However, Dr. Geier points out that the CDC is in the business of distributing flu vaccines, because they represent 300 million doses per year, whereas all the childhood vaccines together only number 20 million.
Dr. Geier goes on to explain that the flu is “the wrong thing to vaccinate against” because you have to keep re-vaccinating against it every year, unlike childhood infectious diseases, such as smallpox, that are only vaccinated for once.
Dr. Geier points out how ridiculous it is to spend billions of dollars on a vaccine that might, at its best, save about 50 lives a year, when there are far more serious problems causing death that are more worthy of that kind of expenditure.

U.S. Government being Sued for Lack of Vaccine Safety Free Shipping available! Purchase here.
When the 1986 National Vaccine Injury Compensation Program (NVIC) was signed into law, it had certain provisions included to make sure vaccines were regularly tested for safety, since the pharmaceutical companies were being given legal immunity due to faulty vaccines.
The federal government Health and Human Services (HHS) department is tasked with this vaccine safety reporting, and a recent lawsuit has revealed that they have failed to conduct such vaccine safety studies since the law was implemented in 1986. See:

Since these facts about vaccines are routinely censored by the pharma-financed “mainstream” media and in government hearings, most of the public is largely unaware of the 1986 NVIC, and that pharmaceutical companies cannot be sued, and that one has to sue the U.S. Government in a special vaccine court.
In November of 2014, the Government Accounting Office (GAO) issued the first report on America’s “Vaccine Court”  in almost 15 years.
The GAO report criticized the government for not making the public more aware that the National Vaccine Injury Compensation Program exists, and that there are funds available for vaccine injuries.
Therefore, the settlements represented by vaccine injuries and deaths included in the DOJ report probably represent a small fraction of the actual vaccine injuries and deaths occurring in America today.

» $218 MILLION Paid Out for Vaccine Injuries and Deaths in 2020 for FDA Approved Vaccines (NOT Fast-tracked)
» Court case reveals NO safety studies conducted on ANY vaccine
» Thailand Paid $45 Million in COVID Vaccine Injury Claims, While U.S. Has Paid $0
» Kenya - Quarter of a million homeless as rising flood waters continue to wreak havoc
» Get Your Flu Shot? DOJ Report From Vaccine Court Reveals Flu Shot is Most Dangerous Vaccine in U.S.