Why A 19th Century French Psychologist May Explain This Bizarro Market

Why A 19th Century French Psychologist May Explain This Bizarro Market


Something odd is going on with stocks, and nowhere is it more obvious than in Europe.
There, as Bloomberg's Hanna Hoikkala writes, shares are bubbling near an eight-month high, a "somewhat surprising" reaction considering that several big companies issued profit warnings in the past quarter. Among the are a number of major European tech companies, namely Infineon, AMS, ASML and Ingenico. Infineon has gained 15% this year. Infineon quickly recovered from a profit warning in late March. AMS warned in February and even suspended its dividend, but the shares are near a five-month peak now.
According to Hoikkala, part of that may be a correction from excessive pessimism in late 2018, when a lot of bad news got priced in. Additionally, it seems that short-sellers have at least partially covered their positions on some of these stocks since then.
However, in a somewhat surprising take on this paradox, SocGen's cautious strategists Alain Bokobza and Roland Kaloyan, write that a little known 19th century French psychologist may be to blame.

"Ever heard of Émile Coué?" the SocGen strategists ask rhetorically, as they use some of the French psychologist’s work "to explain recent market performance and the behavior of equity investors."
First, who is Émile Coué? Coué (1857 - 1926) was a French psychologist and pharmacist who introduced a popular method of psychotherapy and self-improvement based on optimistic autosuggestion, known as La Méthode Coué (The Coué Method). This involved the ritualised repetition of a mantra-like autosuggestion, ideally multiple times per day: “Every day, in every way, I'm getting better and better”.
So what does a therapist who focused on chronically insecure head cases have to do with capital markets? As it turns out, pretty much everything, because as SocGen writes, "when we look at the facts, it strikes us that the equity market may have been reciting the Coué mantra for the last three months." Echoing Bloomberg's observations, Bokobza and Kaloyan observe that the STOXX 600 is up 15% year to date even as macro data have been deteriorating and proved weaker than expected, "as manifested in deeply negative economic surprise indicators."
[url=https://www.zerohedge.com/s3/files/inline-images/eurozone surprise indicator.jpg?itok=QuxdE9uN] 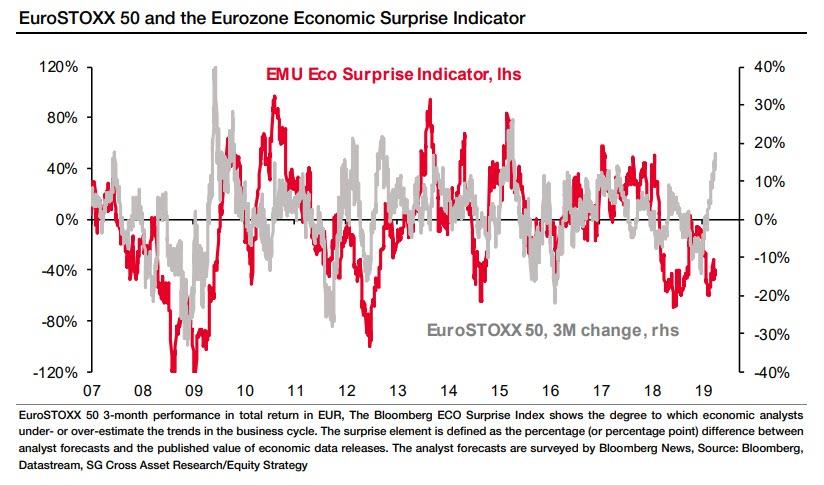 It's not just the macro: companies reported disappointing 4Q18 results, and consensus analysts have slashed 2019 earnings expectations. Meanwhile, across the Atlantic the risk of a recession in the US in the next twelve months has jumped to 27% according to SocGen models, the highest level in this cycle, the US 3m10Y yield curve has recently inverted while Brexit and the US-China trade dispute are still not resolved. And yet, as SocGen sarcastically quips, "every day, it seems that the market is 'getting better and better'."
But it's not just the market that needs daily therapy: investors themselves do too. As SocGen continues, "another illustration of the Coué method at work can be found in investors’ mindsets." While many investors expressed deep scepticism about the rebound at the end of January, they seemed doubtful at the end February but turned hopeful at the end of March thanks to recent positive numbers in terms of US ISM Manufacturing, China PMIs, etc. And yet, SocGen contends that "such thinking appears to overlook relatively mixed data on the macro front (US retail sales, US and European PMIs) and also that a better economic outlook is probably already priced into the equity indices after such a rebound."
Amusingly, the SocGen duo notes that it has even crossed paths with European equity portfolio managers ready to add exposure to hard cyclical sectors such as Metals & Mining and Semis – in other words the sectors among the most at risk in the event of an economic slowdown but also those that have rebounded most since the start of the year.
Needless to say, the report authors, "do not share this enthusiasm for the cycle – SG economists still forecast a US slowdown in 2019 and a recession in 2020 – and we would therefore recommend using the market rebound to adjust European equity portfolios."
Of course, there is another name for the "Coue treatment" - central banks.
While thanks to the "central banks treatment", both the STOXX 600 and EuroSTOXX 50 have returned to the levels they were trading at back in October, but not at the same valuation levels: as earnings expectations have been slashed, the STOXX 600 is now trading at 14.2x 2019 cons. P/E, up from 13.5x in October, and the EuroSTOXX 50 on 13.5x vs 12.5x in October.
So, what explains this P/E expansion over the last six months? As SocGen has noted previously, "it is clearly not the growth outlook, as this deteriorated over the same timeframe. Indeed, macro analysts have cut their GDP estimates and equity analysts have marked down their earnings growth estimates across the board for 2019."  Instead, the main trigger has been the impact of more dovish monetary policy on perceived recession risk: the US 2-year bond yield (a good measure of short-term market anticipation of central bank policy) has dropped from 2.9% to 2.3% over the last six months, whereas the German 2-year is at the same level as six months ago (-0.6%).
Putting it all together, since the equity market has been enjoying its "special treatment" from central banks - even as everything got worse by the day when stripping away the therapy - then every day, in every way it has been getting better and better (when in reality it has been getting worse).
* * *
There is one more delightfully ironic observation, which is to be found in the last, sobering note on Émile Coué  - as Socgen's authors write, he also discovered what later came to be known as the placebo effect. A placebo, of course, is a substance or a treatment that looks just like regular medicine, but without any therapeutic value. Research has found that placebos have no impact on diseases, but only affect the perception of and relief from symptoms.  Just like central bank liquidity.