OUT OF MIND » THE INSANITY OF REALITY » JULIAN ASSANGE & WIKILEAKS & » BREAKING - Julian Assange Arrested in London!

The WikiLeaks founder was arrested in London on Thursday. 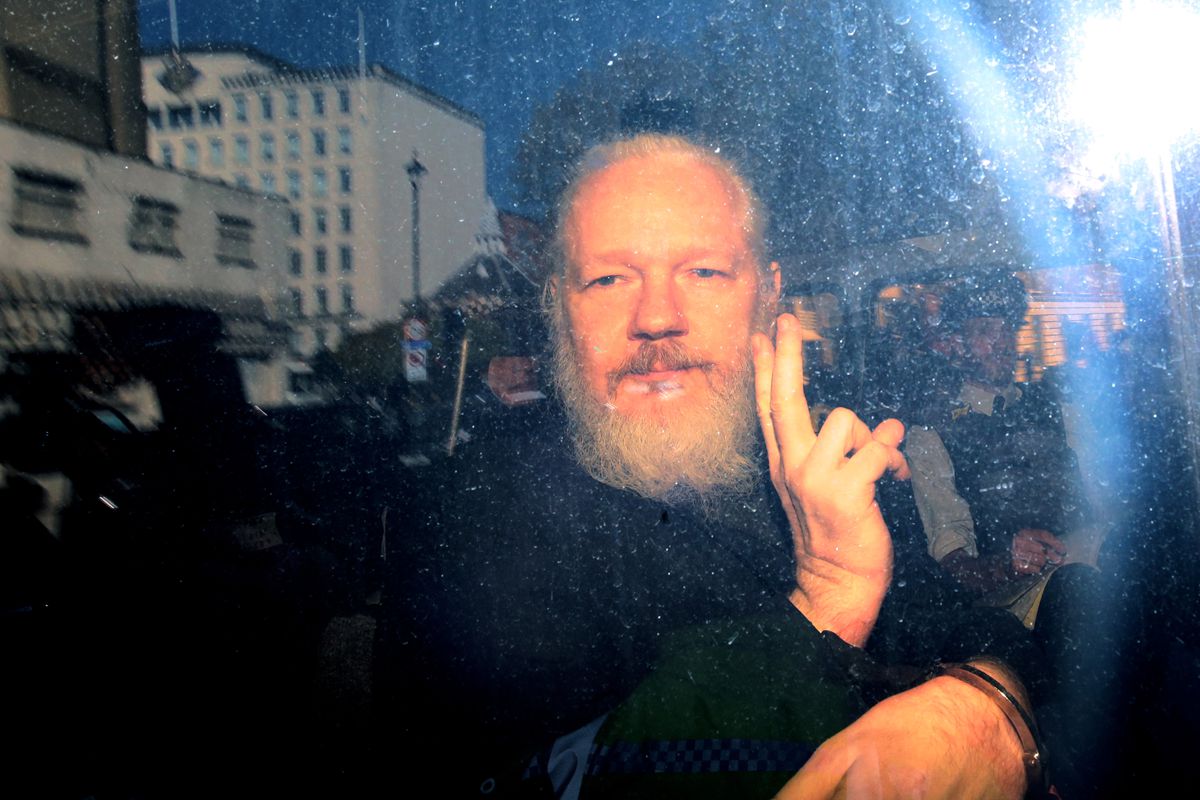 On Thursday, following months of speculation, WikiLeaks founder Julian Assange was arrested by British authorities after being expelled from the Ecuadorian embassy in London, ahead of his planned extradition to the United States.
Footage of the moment that Assange was hauled out of the embassy after spending nearly seven years there was posted to Twitter by the Ruptly video news agency. Here it is:

In the footage, Assange can be heard yelling, “The UK must resist!” In his hand he held a book that Jon Levine of The Wrap identified as Gore Vidal’s History of the National Security State.

Ecuadorian President Lenín Moreno posted a video on Twitter explaining that the decision to expel Assange from his country’s embassy was made because Assange allegedly “violated repeatedly clearcut provisions of the conventions on diplomatic asylum of Havana and Caracas ... he particularly violated the norm of not intervening in the internal affairs of other states.”

WikiLeaks co-founder Julian Assange could face trial in the U.S. after his Thursday arrest in London which the United Kingdom’s Metropolitan Police said occurred partly to extradite him to the United States.
Assange, 47, had been living in the Ecuadorian embassy in London for seven years until Ecuador withdrew his asylum. He first holed up in the embassy when Sweden tried to extradite him because of sexual assault allegations, reported BBC. That case has been dropped, but Assange has remained in the embassy to avoid being extradited to the U.S. or another country he has claimed wants to question him.
“I can confirm Julian Assange is now in police custody and rightly facing justice in the [United Kingdom],” UK Home Secretary Sajid Javid tweeted.
Police in the UK said they arrested Assange for failing to surrender to the court, reported BBC. Reports that the U.S. Department of Justice was preparing charges against Assange cropped up in November.
Ecuadorian president Lenin Moreno said the country terminated asylum for Assange due to repeated violations of international conventions, but Wikileaks claimed on Twitter that Ecuador was “in violation of international law” by essentially kicking out the Australian national.
Ecuador’s government invited Scotland Yard to the embassy, the police force said according to BBC.
WikiLeaks has claimed that Assange was being spied on in the Ecuadorian embassy.
Assange’s relationship with Ecuadorian officials could be characterized as anything but smooth. Ecuador felt the need to order Assange to take care of his cat and clean the bathroom in October.
The WikiLeaks founder became a household name for publishing tens of thousands of documents related to the U.S. military. Assange’s name also popped up in special counsel Robert Mueller’s investigation of Russian interference in the 2016 presidential election, but Mueller’s January indictment of President Donald Trump associate Roger Stone alleged no direct contact with Assange.
Follow Evie on Twitter @eviefordham.

OUT OF MIND » THE INSANITY OF REALITY » JULIAN ASSANGE & WIKILEAKS & » BREAKING - Julian Assange Arrested in London!