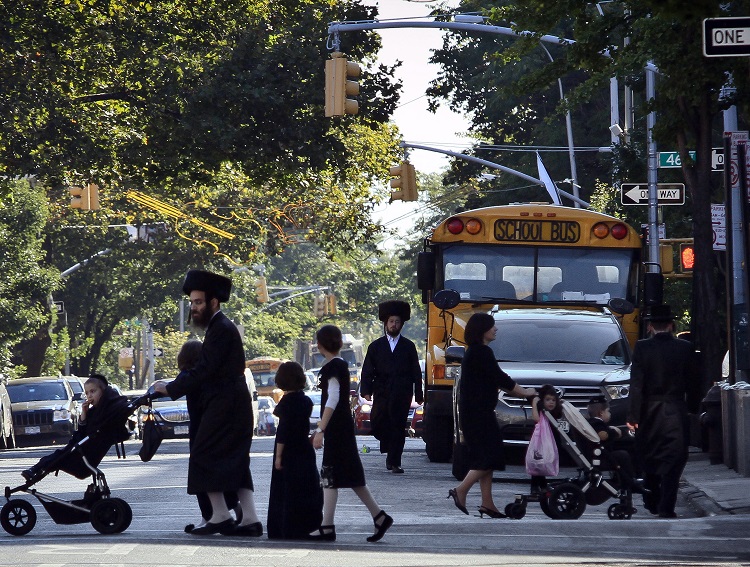 by Brian Shilhavy
Editor, Health Impact News
A day after New York City Mayor Bill de Blasio declared a state of emergency over measles outbreaks in Jewish communities of Brooklyn, and ordered forced vaccinations of everyone not yet vaccinated with the MMR vaccine, the Washington Post is reporting that the Health Department has sent “disease detectives” into the community to force compliance.

On Wednesday, the city sent 15 to 20 “disease detectives” into the community, some with Yiddish interpreters, a day after Mayor Bill de Blasio’s vow to quash the outbreak with $1,000 fines and misdemeanor charges for anyone in certain areas who refuses to be immunized.
The workers, wearing blue Health Department jackets, conducted interviews in the homes of people who may have been exposed to the dangerous, highly contagious virus and checked the immunization records of all those they may have had contact with. Others pored over records for the same information at a federally funded health clinic in the heart of the community.
There are 1,800 unvaccinated yeshiva, or Orthodox Jewish, students with religious exemptions in the four Zip codes targeted by the city, spokeswoman Marcy Miranda said. (Source.)

John Marshall, chairman of emergency medicine at Maimonides Medical Center, is reportedly threatening to call the police on parents who refuse to vaccinate their children.

Marshall said he threatened to call police on parents who were refusing to send a feverish child to the hospital in an ambulance for fear the authorities would learn all their children were unvaccinated.
“The ones who are so vehemently anti-vaccination, I don’t know how to convince them,” said Edward Chapnick, director of Maimonides’s infectious disease division. (Source.)

The Mayor and the Health Department are assuming that by declaring a state of emergency over recent measles “outbreaks,” that they have the legal authority to suspend certain laws in place protecting the rights of residents of NYC to opt out of vaccines due to religious beliefs, and HIPAA privacy laws which would prevent them from pulling up medical records of children to see if they have been vaccinated or not.
In the meantime, attorneys are saying that they will file a lawsuit challenging the emergency order by Friday.
Attorney Michael Sussman, who successfully represented parents in Rockland County, New York last week and convinced the state Supreme Court to overturn the County’s ban on unvaccinated children, is one of the attorneys planning to file a lawsuit in New York City.
Much like the emergency order issued in Rockland County by County Supervisor Ed Day, Sussman stated that Mayor de Blasio’s emergency order is “an overreach of authority.”
In Sussman’s successful lawsuit against Rockland County, New York Supreme Court Judge Rolf Thorsen ruled that the 166 cases cited by the county since the measles outbreak began last October did not rise to the level of an epidemic or constitute a disaster.
There have been no deaths in the United States due to measles since a single case was reported in 2015 (an adult woman), and none during the prior ten years before that.
Another New York attorney who is reportedly filing a lawsuit against the city is Attorney Robert J. Krakow. Krakow represents clients who have been injured by vaccines. He also believes the city has overstepped its powers. (Source.)
Attorney Krakow is one of the few attorneys in the United States that represents victims who have been injured or had family members killed by vaccines before the U.S. Vaccine Court. Pharmaceutical companies who manufacture vaccines cannot be sued for damages in the U.S. – they have legal immunity due to the 1986 National Childhood Vaccine Injury Act.
The measles vaccine (MMR) is one of the vaccines Attorney Krakow has litigated against for vaccine injuries. (One case here.)
Another law firm representing vaccine victims in the U.S. Vaccine Court, Maglio Christopher & Toale, negotiated a $101 million settlement last year (July 2018) for an infant who suffered from encephalopathy due to the MMR vaccine. (Source.)

In spite of the fact that the New York State Supreme Court has already ruled against the current rationale to declare a state of emergency over a common childhood disease that no one is dying from, in an attempt to circumvent civil rights, the corporate-sponsored “mainstream” media continues to publish the pharmaceutical industry’s narrative on the current measles outbreaks.
The Washington Post story published yesterday by Lenny Bernstein, Lena H. Sun and Gabrielle Paluch is a perfect example of this kind of one-sided reporting.
As we reported last week during the Rockland County emergency order and ban of unvaccinated children in public places, the County was reporting total measles cases over a 6-month period, when in fact a citizen called the Health Department and found out that there were at the time only 5 active cases. Hardly enough cases to call a state of emergency. See:


As Vaccinated Adults Continue to Spread Measles Many Question Real Reasons Behind N.Y. Ban on Unvaccinated Children in Jewish Communities

No one in the corporate media is asking this question of the neighborhoods in Brooklyn. They are only quoting total measles cases since October last year (2018). How many actual current cases are there that warrants such drastic action?
These “news” stories also use fear tactics to try and make their readers think measles is so dangerous that people who refuse the vaccine are a public health threat.
The Washington Post story, for example, states:

Measles, considered eradicated from the United States in 2000, is not just a fever and a rash. It can cause pneumonia as well as encephalitis, an inflammation of the brain that can have long-term consequences.

In spite of the fact that there have been cases of measles every year in the U.S. prior to and after 2000, in spite of the CDC declaring it was “eradicated,” where are the reported cases of measles causing these kinds of severe injuries?
As I mentioned above, one case last year litigated in the vaccine court was for a child who suffered “encephalitis, an inflammation of the brain,” as a cause of the measles vaccine.
For the most part, the corporate media does not even mention anything about a vaccine court, or that billions of dollars have been awarded by the U.S. Government for vaccine injuries and deaths.
Encephalitis, pneumonia and death are even listed as a side effect in the drug manufacturer package insert:

The other key aspect of the MMR vaccine no one in the corporate media is reporting or investigating is if those recently vaccinated with the live MMR vaccine are infecting others. Are these cases of measles in these areas the “wild” or “vaccine strain” of measles?
A 2017 study published in the Journal of Clinical Microbiology reported that during the 2015 Disneyland Measles outbreak, it was determined that 73 of the 194 measles cases were from the vaccine:

During the measles outbreak in California in 2015, a large number of suspected cases occurred in recent vaccinees. Of the 194 measles virus sequences obtained in the United States in 2015, 73 were identified as vaccine sequences (R. J. McNall, unpublished data). (Source.)

Rebecca J. McNall, a co-author of this study, is a CDC official in the Division of Viral Diseases. So the CDC has the data proving that some measles outbreaks are, at least in part, caused by the vaccine.
So while the corporate media, funded largely by the pharmaceutical industry, is hyping the dangers of measles in support of efforts to go after those who are unvaccinated, they are obviously suppressing or not investigating the dangers presented by the vaccine itself, and that the vaccine might actually be responsible for continued outbreaks.