A team of archaeologists from the United States and Europe has revealed the first example of Paleolithic figurative cave art found in the Balkan region. 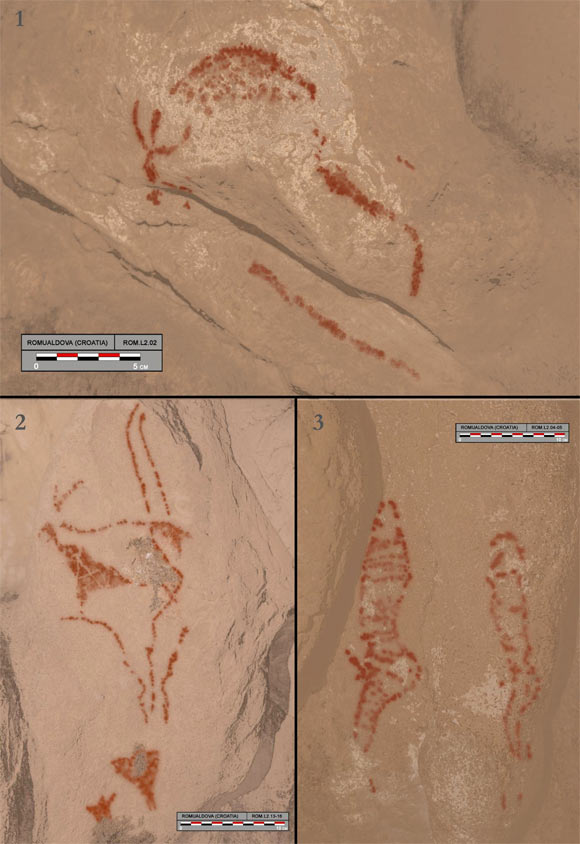 Figurative paintings in Romualdova Pećina, Croatia: bison (1), ibex (2) and anthropomorphic figures (3). Image credit: Aitor Ruiz-Redondo.
“The importance of this discovery is remarkable and sheds a new light on the understanding of Paleolithic art in the territory of Croatia and the Balkan Peninsula, as well as its relationship with simultaneous phenomena throughout Europe,” said Dr. Aitor Ruiz-Redondo, an archaeologist at the University of Southampton and a postdoctoral researcher at the University of Bordeaux.
Dr. Ruiz-Redondo and colleagues found several figurative paintings, including a bison, an ibex and two possible anthropomorphic figures, in 2010 in Romualdova Pećina (St. Romuald’s Cave), Croatia.
Further excavations at the site led to the discovery of a number of Paleolithic objects: a flint tool, an ochre crayon and several fragments of charcoal.
Radiocarbon dating of the artifacts show an estimated age of around 17,000 years and other indirect data suggest the paintings date to an even earlier period — at around 34,000-31,000 years ago.
This discovery makes Romualdova Pećina the first site where figurative Paleolithic rock art has been discovered in the Balkans.
Together with Badanj in Bosnia and Herzegovina, the two are the only examples of rock art from the Paleolithic period in this area.
“Rock art is key for understanding European Paleolithic societies,” the archaeologists said.
“Long thought to have been restricted to South-west Europe, recent discoveries on the Balkan Peninsula have expanded significantly the geographic distribution of Upper Paleolithic figurative rock art, calling into question the idea of its limited distribution.”
The findings were published in the journal Antiquity.
_____
Aitor Ruiz-Redondo et al. 2019. Expanding the horizons of Palaeolithic rock art: the site of Romualdova Pećina. Antiquity 93 (368): 297-312; doi: 10.15184/aqy.2019.36