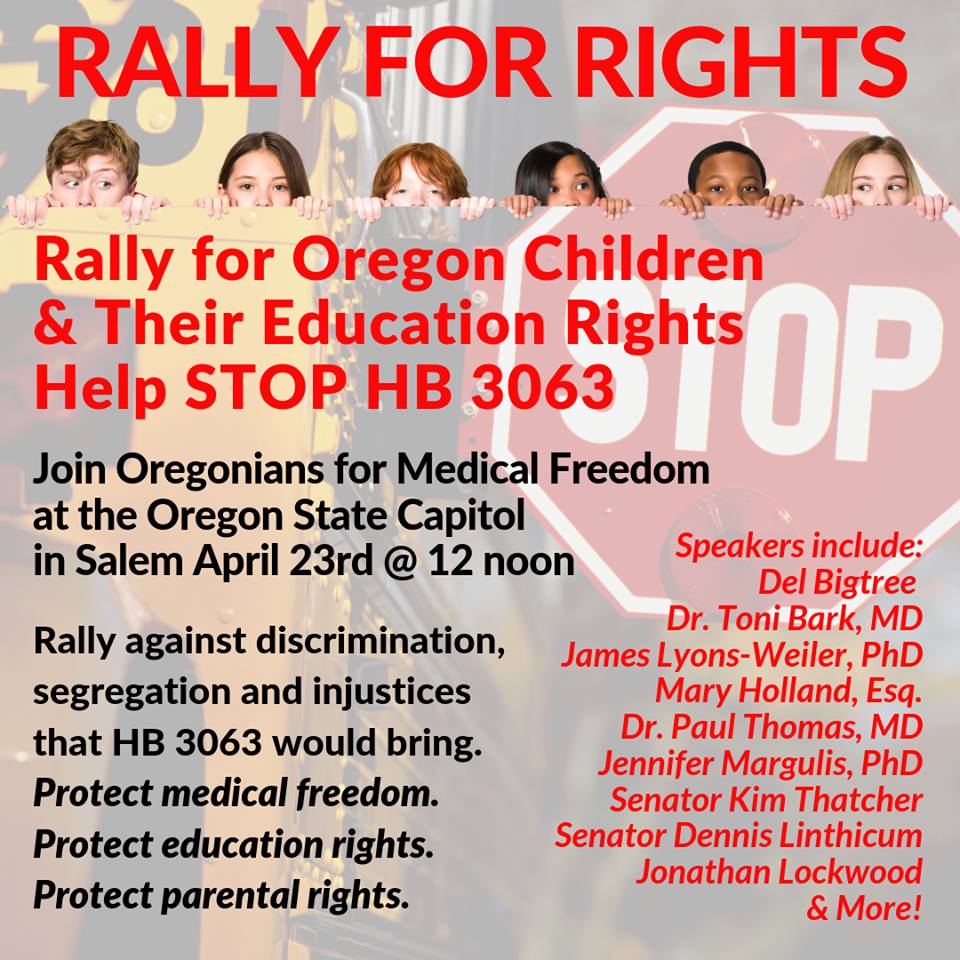 Comments by Brian Shilhavy
Editor, Health Impact News
Statistics clearly show that the vast majority of the American public vaccinates their children. And yet, efforts to force vaccinations on those few who don’t want them seem to be opposed by a majority of those on both sides of the vaccine debate.
Barbara Loe Fisher of the National Vaccine Information Center (NVIC) recently wrote:

Since 2015, no state legislature has removed a vaccine exemption.
This year, while 11 states are proposing to restrict or eliminate vaccine exemptions, NVIC is supporting 61 bills that expand exemptions or protect vaccine informed consent rights (as of Mar.1, 2019), the largest number of bills we have ever supported in a legislative session.
This pushback against forced vaccination is being met with fury by doctors and lawyers inside and outside of government..

The majority of the American public has a healthy distrust of Government motives in forcing medical procedures upon those who do not want them. As Fisher states:

The signs are everywhere that people are trying to throw off the chains binding them to failed medical and public health policies that cost Americans more than three trillion dollars a year in health care costs.
Americans are beginning to understand that trusting blindly and saluting doctors smartly for the past 40 years has not prevented 1 child in 6 from becoming learning disabled, or 1 in 9 from suffering with asthma, or 1 in 10 from struggling with mental and behavior disorders or 1 in 40 from developing autism.
America now has the worst infant mortality rates, and worst maternal mortality rates, and worst life expectancy of all developed nations.
Highly vaccinated and medicated Americans are very sick, with millions of children and adults suffering with immune and brain dysfunction marked by chronic inflammation in their brains and bodies that confines too many of them to special education classrooms and frequent trips to doctors’ offices to try to deal with a lifetime of chronic illness and disability.
No public health official, professor or legislator in America can explain why millions and millions of children and more than 1 in 2 adults are chronically ill or disabled.
This is the real public health emergency that mothers and fathers want to talk about, but Congress and medical trade groups do not want to talk about.
This is the elephant in the room at every public hearing on bills proposing to take away or expand vaccine informed consent rights being held in state legislatures today. (Source.)

Oregon has now proposed a bill that would basically make Oregon into a Vaccine Police State, forcing all children to receive all vaccines as a condition for receiving education.
Lawmakers, doctors, attorneys and the Oregon public have responded in shock to this bill, most of which is reported to have been crafted in secrecy.

Oregon bill HB 3063 strips Oregonians of religious and philosophical freedom when it comes to vaccines and abolishes all but the medical exemption (ME).
In Oregon most doctors are unwilling to write medical exemptions because they must be approved by the Oregon Health Authority (OHA), and they have one of the most restrictive set of rules for MEs in the country.

“If you’re against discrimination, you are against HB 3063,” says science journalist and book author Jennifer Margulis, PhD, who describes herself as pro-vaccine and says she has vaccinated her children, albeit on a slower and more evidence-based schedule than the one recommended by the CDC.
“We are a pioneer state that values religious freedom and medical freedom. This bill is a gross government overreach.”

Dr. Margulis and several others, including Dr. James Lyons-Weiler, PhD, a biochemist who has published over 100 peer-reviewed papers, and Dr. Paul Thomas, MD, a pediatrician with over 15,000 children in his practice, will be gathering in Salem, Oregon at a “Rally for Rights” to oppose the bill on April 23, 2019.
Of particular concern, Margulis says, is an amendment that bars children who go to online school from being in public places if they are just missing one vaccine.

“I think it’s important to realize that this is not a debate about the safety and efficacy of vaccines,” Margulis says. “It’s a debate about whether we should be making medical decisions in the privacy of a doctor’s office or in the state legislature.”

Margulis says she has spoken to medical doctors across the state who oppose the bill. Many fear speaking up against it, however, as they don’t want to be categorized as “anti-vaccine.”

“Talking about vaccine safety and safe vaccination is not anti-vaccine,” Margulis insists.
“It’s time to start a new conversation about children’s health. We need to stop the name-calling and start looking at the science. The science, unfortunately, suggests that parental concerns about the safety of the current vaccination schedule are well founded.”

In particular, Margulis is concerned about the high level of aluminum in the hepatitis B vaccine, which is given to most American children just a few hours after birth. Aluminum is a known neurotoxin and giving it to newborns and infants may be a causative factor in the brain damage we are seeing among America’s children, Margulis says.

Many educated parents choose not to do the hepatitis B vaccine. But a child missing this vaccine, which is against a sexually transmitted disease, will be barred from school if HB 3063 passes.
Yet a child who is hepatitis B positive cannot be denied access to an education. The idea that we would deny children the right to go to school based on the choices of their parents is absurd. I’m very disappointed to see some otherwise very smart legislators supporting this bill.

Lawmakers Speak Out in Opposition 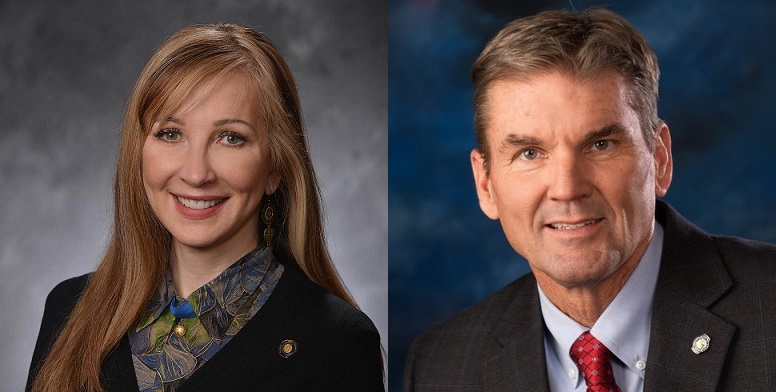 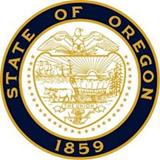 from the offices of
SENATOR
DENNIS LINTHICUM
Linthicum blasts secrecy around HB 3063
SALEM, Ore.—House Bill 3063 is hovering in the Ways and Means Committee and is being tinkered with behind the scene by a group of lawmakers attempting to abolish consent in medicine.
The bill is especially concerning given the connections of Big Pharma and the Oregon Health Authority, one of the most notorious agencies in the Brown administration.
Senate Republican Whip Dennis Linthicum, R-Klamath Falls, says the Senate Health Care Committee was inappropriately shut out of the legislative process on the bill with its designation to the Ways and Means Committee.
Linthicum also expressed support for a package of 29 amendments introduced by his colleague state Sen. Kim Thatcher, R-Keizer, that if signed into law mandates forcibly injecting members who vote “yes” on the bill, along with their family members, and the governor.
Linthicum released the following statement:

We must not tolerate the efforts to put unelected bureaucrats between you and your doctor.
Oregon legislators are not your doctor and OHA shouldn’t be made the security guards at your child’s school. Where there is a risk, there has to be free-choice.
The state must not mandate a pharmaceutical product where there is absolute liability protection for Big Pharma on one side, while stripping the rights of Oregon’s citizens on the other side. Our state’s legislative motto ought to reflect the Hippocratic Oath: First do no harm.

from the offices of
SENATOR
KIM THATCHER
Thatcher requests 29 amendments to HB 3063
SALEM, Ore.—Opponents of House Bill 3063, an extreme proposal that would mandate forcible injections as a condition of entering public spaces, could find some relief in a package of amendments requested by state Sen. Kim Thatcher,R-Keizer.
Thatcher’s amendments highlight key problems with the proposal.
Thatcher released the following statement:

House Bill 3063 abolishes informed consent, undermines the Hippocratic Oath and puts the Oregon Health Authority in between children and their doctors.
Unelected bureaucrats and Pharma should not be making decisions that are best made by doctors and their patients.
The package of amendments I have requested be drafted dismantle the false narrative promoted by proponents of forcible injections and we are working with legislative counsel to draft these amendments.
Where there is a risk, there must be a choice—keep up the fight.

The following amendments were requested by Thatcher’s office: 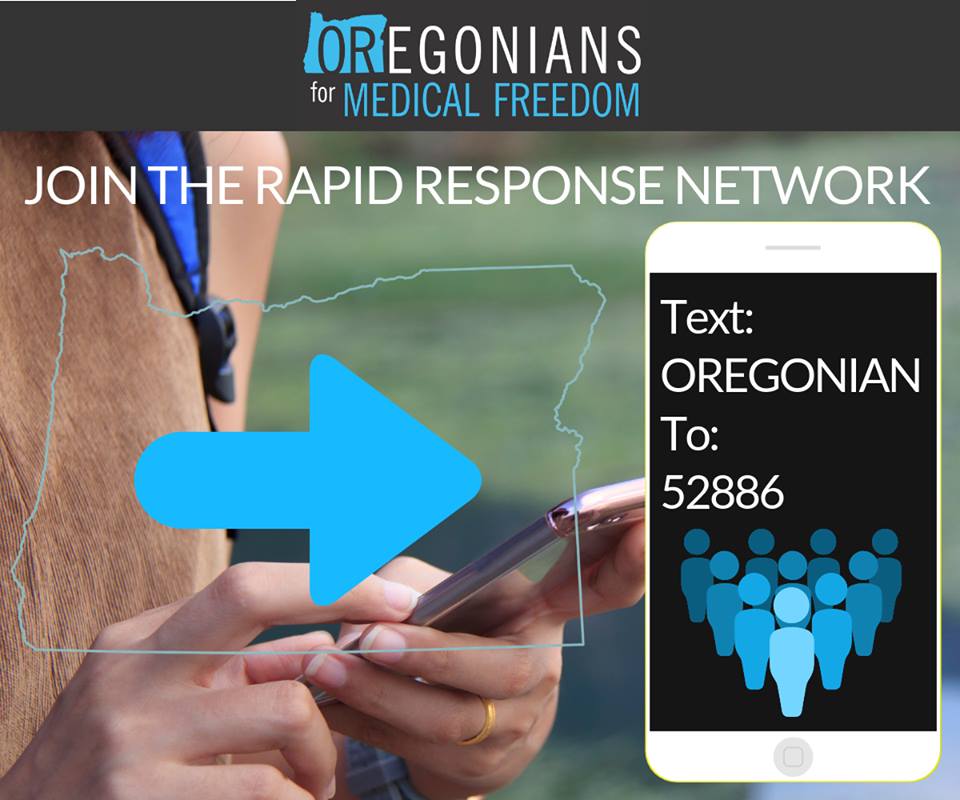 Join the Oregonians For Medical Freedom Rapid Response Network today! Get emails and text messages for immediate call to actions. Use our new tool to quickly email, tweet and call your representatives. Simply send a text to 52886 with the word Oregonian. You’ll be asked 3 quick questions to get started!

» Will the Government Start Using Force against the American Public Resisting Mandatory Vaccines?
» Doctors warn CDC to tell public about side effects of COVID vaccines, number of doses needed
» As NY Goes, So Goes OR: Bill Forces Vaccines On Children, Public Places Ban, But "Wow" Amendments
» UPDATES - LIVE AT THE CAPITOL: NEW JERSEY PROTESTERS START GATHERING TO OPPOSE BILL S2173
» U.S. Congress Holds Hearings on Vaccines: Will Lawmakers Look at BOTH Sides of the Issue?