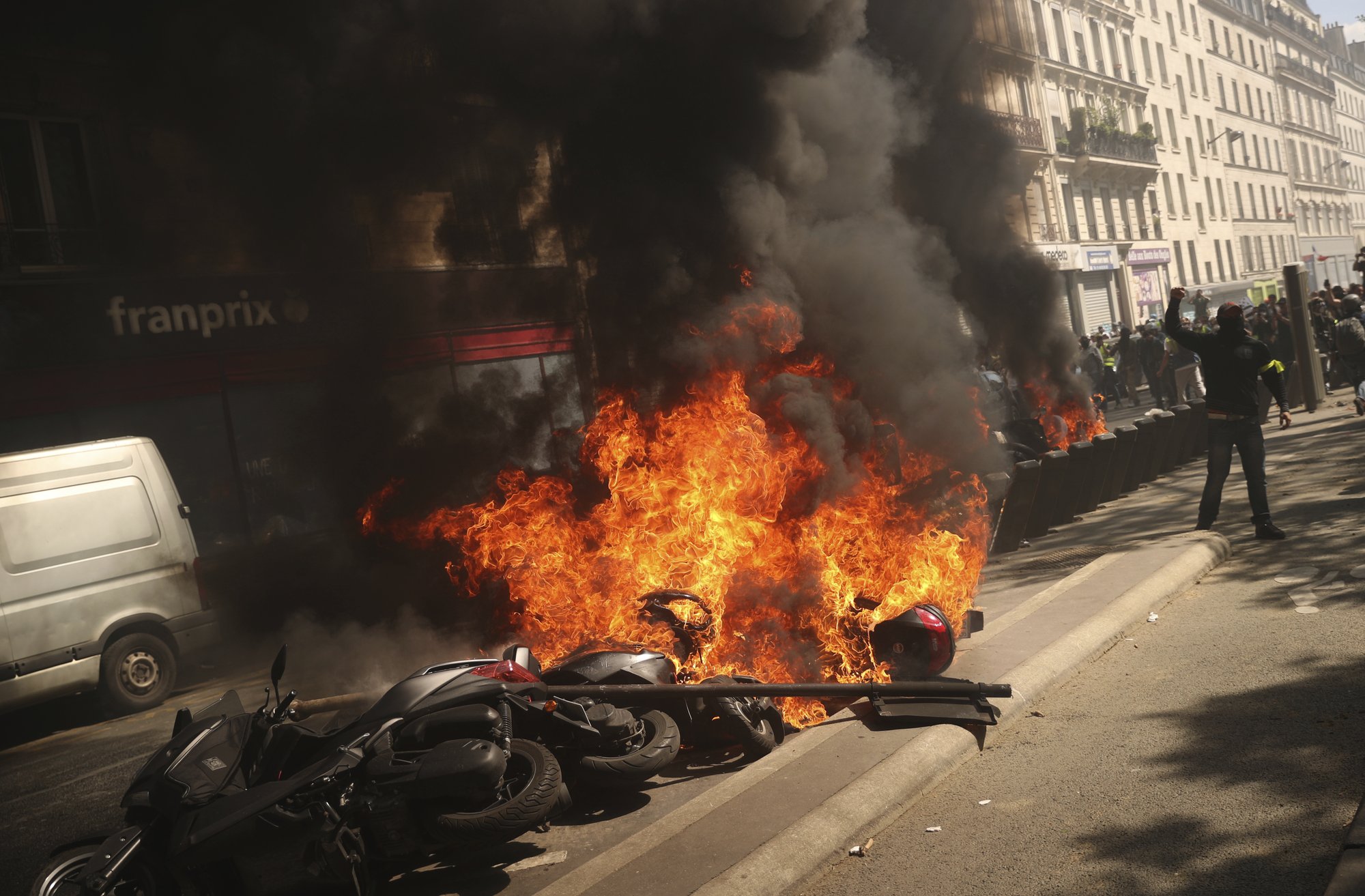 Source: AP
A set of motorbikes are set alight during a yellow vest demonstration in Paris, Saturday, April 20, 2019. French yellow vest protesters are marching anew to remind the government that rebuilding the fire-ravaged Notre Dame Cathedral isn’t the only problem the nation needs to solve. (AP Photo/Francisco Seco)
PARIS (AP) — French yellow vest protesters set fires Saturday along a march through Paris to drive home their message to a government they believe is ignoring the poor: that rebuilding the fire-ravaged Notre Dame Cathedral isn’t the only problem France needs to solve.
Like the high-visibility vests the protesters wear, the scattered small fires in Paris appeared to be a collective plea to French President Emmanuel Macron’s government to “look at me — I need help too!”
Police fired water cannon and sprayed tear gas to try to control radical elements rampaging on the margins of the largely peaceful march, one of several actions around Paris and other French cities.
The protests marked the 23rd straight weekend of yellow vest actions against Macron’s centrist government, which they see as favoring the wealthy and big business. Protesters view themselves as standing up for beleaguered French workers , students and retirees who have been battered by high unemployment, high taxes and shrinking purchasing power.
But violence and divisions have marred the movement.
Associated Press reporters saw a car, motorbikes and barricades set ablaze around the Place de la Republique plaza in eastern Paris. The smell of tear gas mixed with the smoke, choking the air.
Paris firefighters — who struggled earlier this week to prevent the 12th-century Notre Dame from collapsing — quickly responded to extinguish the flames at Saturday’s protest.
Masked protesters hurled paving stones and flares. Helmeted riot police repeatedly charged as they tried to contain the crowd. AP reporters saw at least two journalists injured in the melee. Troublemakers also ransacked at least two stores and one black-clad protester jumped on a parked Mercedes, smashing its windshields.
Paris police said authorities detained more than 200 people by early afternoon and carried out spot checks on more than 20,000 trying to enter the capital for the protest.
The violence contrasted sharply with the peaceful atmosphere at another march through Paris, where demonstrators mourned the Notre Dame blaze while also keeping up the pressure on Macron. They tried to march to Notre Dame itself, but were stopped by police a few hundred meters (yards) away.
Young women at that march skipped down a street along the Seine River, accompanied by drummers and singers. One protester carried a huge wooden cross resembling those carried in Good Friday processions.
Many protesters were deeply saddened by the fire at a national monument . But at the same time they are angry at the $1 billion in donations for Notre Dame renovations that poured in from French tycoons while their own economic demands remain largely unmet and they struggle to make ends meet.
“I think what happened at Notre Dame is a great tragedy but humans should be more important than stones,” said protester Jose Fraile.
Some 60,000 police officers mobilized for Saturday’s protests across France, and the heavy security thwarted some tourists trying to enjoy the French capital on a warm spring day.
“Paris is very difficult right now,” said Paul Harlow of Kansas City, Missouri, as he looked sadly at the damaged Notre Dame.
He and his wife Susan were in Paris only for a few days and didn’t make it in time to see the cathedral. On Saturday, their efforts to visit museums were derailed by closed subways and barricaded roads.
“I don’t think we’ll be back,” he said.
Other visitors showed solidarity with the yellow vest cause.
“I am not interested in joining them, but I can understand what they’re angry about,” said Antonio Costes, a retiree from the Paris suburb of Montreuil who came Saturday to see the damage to Notre Dame. “There is a lot of injustice.”
Macron champions pro-business policies that he believes will create much-needed jobs in France. He had been scheduled to lay out his responses to yellow vest concerns on Monday night — tax cuts for lower-income households and measures to boost pensions and help single parents — but canceled the speech after the Notre Dame fire broke out. He’s now expected to address the nation on Thursday.
Some yellow vest critics accuse Macron of trying to exploit the fire for political gain. One protester carried a sign targeting Macron that read: “Pyromaniac – we are going to carbonize you.”
Another huge sign read: “Victor Hugo thanks all the generous donors ready to save Notre Dame and proposes that they do the same thing with Les Miserables,” referring to the famed author’s novels about the cathedral and the struggles of France’s poor.
The government estimated that some 27,900 people marched Saturday around France, including some 9,000 in Paris. That was below organizers’ estimates.
The yellow vest cause started in November over a rise in fuel taxes and expanded to cover a broad list of economic complaints like high taxes and stagnant wages. It has suffered from divisions in recent months, notably over protest violence and the extremist views of some demonstrators.
___
Chris den Hond, Francisco Seco and Deborah Gouffran in Paris contributed to this report.

» Aussie Yellow Vest Footage and Next Protests
» The Yellow Vest Movement Has Spread Like Wildfire Across the World
» Mystery figure at Notre Dame cathedral fire.. No Worries! Fakebook informed me it was just a Fireman
» ARSON | Notre-Dame fire of April 15, 2019, a Catholic, Jesuit, Masonic, Rosicrucian ritual
» Yellow Vest protest in Paris: Act XX