OUT OF MIND » PERCEPTUAL AWARENESS » THE SHIFT IN CONSCIOUSNESS » What Do You Mean WE Kemosabe?

What Do You Mean WE Kemosabe? 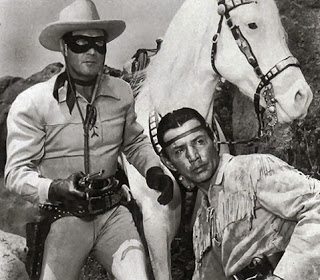 There's an old joke about the Lone Ranger.

The Lone Ranger and Tonto find themselves after a long exhausting horse
ride staring up at canyon walls filled with hostile Apache warriors.
The Lone Ranger sensing the impending doom, turns to Tonto, his
faithful Indian scout, and says "What do WE do now Tonto?" Tonto slowly
turns towards to the Lone Ranger, thinks of his Indian brothers and
says "What do you mean WE, kemosabe?"

The joke is funny, because it speaks to us of the shifting nature of
allegiances in the game of duality. Who's on first as Abbott and
Costello posed the question... It can get quite confusing trying to keep
track of it all. And nobody trusts anyone. And it gets worse the more
money and power is involved.

Is the person who gives me a great scoop working in my interest, or
giving me a short rope of disinformation to hang myself? If you dwell
on such ideas for long that's the sure road to paranoia.

Why does one blogger insist I must be the enemy of another if I am to be
their friend? One accused me a belonging to the cabal simply because I
choose not judge another's motives. And the same people they wanted me
to judge, judge another yet another blogger who's given me some of the
most accurate information yet. Why does everyone want me to put
conditions on who I love? Love doesn't require that someone else
qualify for it. Love poses no preconditions. 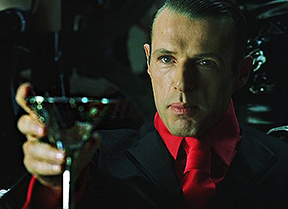 Some people have the overriding need to appear to be "right" and "to
have all the answers" and to align those around them to the polarity of
their ego. Mostly that comes from the ego driven drive to never have to
say "I was wrong". That would mean they'd have to drop the egoic mask.
Yet redemption requires the ability to self correct, the ability to say
I was wrong. To surrender the ego. The ego is like a program in our
heads that has one overriding priority, DON'T GET DELETED OR IGNORED.
Its a bit like the information trafficking Merovingian in the movie
Matrix, its sneaky, its conniving, it wants to control access and power
and it loves duality. Its spins and spins like some Unix multi-threaded
virtual started task, and it all comes back to self preservation of the
ego program.

We like to think of the ego as self-preservation of the body - but
that's only because the ego needs the body to survive - the ego does not
carry forward past this life. There is no need for ego in Oneness.
There is only the One. There are situations the ego will gladly
sacrifice the body and the soul. It is the force driving the cabal to
go down in unrepentant flames. Asians have been long known to commit
suicide to "save face". Just another term for saving the ego. We've
heard of the horrible "honor killings" in Pakistan, Afghanistan and
India by fathers who daughters had been raped through no fault of their
own. And where was the father's love in all this? On his ego not his
daughter. And of course we've got our own rich western history of Wall
Street bankers and industrialists who commit suicide when their ego
based empires come crashing down and the cabal who kill those who tell
the truth.

Every great horror on this planet has come from loving abstractions of reality over loving people.

My dad was the most honest man I ever met, except when it came time to
being honest about himself. I never ever heard my father admit to
making a mistake. It was unthinkable to him for him to let anyone see
his flaws. Especially his son. Yet what he didn't realize is I wasn't
looking for a perfect father, I was looking for HIM. I still wonder if I
ever really knew the man inside. I remember very early on thinking that
this quirk of my father, was itself a flaw. Children analyse their
parents quite well. And the love them unconditionally.

I didn't grow up in the plains of Eastern Montana during the Cabal
induced 1930s Great Depression. I didn't grow up in the age when the
idea of human management was to scream and shout the loudest at those
below you. And oh did those men know how to shout! I didn't grow up on
a cattle ranch herding cows and whistling and shouting to get the cows
in the barn before the blizzard hit. I wasn't in the military shouting
profane streams of insults as a drill sergeant to boys fresh off the
farm desperately trying to give them enough training to keep them from
getting their heads blown off by German Nazi soldiers. That was my
father's life.

Yet I've always thought, how could a person ever self-correct their path
in life if they could never admit they made a wrong turn? Its the mind
trap of the Ego. Its enslavement.

If you read the book by Niccolò Machiavelli, The Prince, there's one
central theme that comes out and every politician, power broker and
religionist since has practiced. Never apologize. They will obfuscate,
misdirect, counter accuse, but never apologize. Sad really. Politics
is the game of literalizing metaphor and hanging people by twisting
intent of their words. So perhaps my father, having grown up in such a
dark time was just cautious. But he didn't need to be that way with me.
I loved him and adored him. And love doesn't need Machiavelli to tell
it what is right and how it should look to others. It just is.

I once thought of myself as a Christian. I still follow the teachings
of Jesus - they are beautiful teachings! But I think it'd be misleading
to call myself a Christian in the restrictive sense most
American Protestantism define that word - so I won't. Not even Jesus
would fit that definition. The man who ate with tax bounty hunters,
debt collectors and whores and saw them as ONE with himself. He was not
afraid of the world. But what did they see? What was it about this man
that so affected lives and continues to affect lives? They saw love
unrestricted by duality of them vs us! It isn't love that keeps people
in negative forms of behavior, its judgment. People often judge
themselves even more harshly than those around them do. So harshly they
think they are not even worthy of rising above it all, to let their
divine spark shine for what it is.

In church we'd speak of those condescending tones of those "in the grip
of Satan". We'd speak of those who were not converted or had not yet
accepted Jesus as their personal savior, as being "unsaved" or
"unconverted" outsiders. The other. The world. And those we really
didn't like were possessed by the devil or his demons. A simplistic
worldview that gives far too much credit to some renegade 4th
dimensional ETs who have commandeered our solar system for 6,000 years.

I can't help but see parallels in the mindsets of some lightworkers. In
some of the dogmatic points that some light workers hold, whether its
in their beliefs, the proclamations of their seers. Is one politician
of the light or not? "Is that blogger working for the cabal?" How each
and everyone fits into this story only time will tell. Maybe not even
the angels know? This play is not yet over. But it is the greatest
show on earth.

Is it any wonder western religions don't believe the world predated
those they both fear and worship from mesopotamian legends? And nobody
in these mindsets, realizes that their deity and devil is one in the
same a force that has been hiding for eons in a synthetic reality trying
to flee from divine love field of the Creator Source. The Source who
lives in all creation, even those who deny it, and patiently beckons
all to return to TRUE REALITY. The world is a fractal prodigal son. The
Creator waits to fold the fractal back into his never ending love.

The truth is NONE OF US has the complete truth or insight into what is
taking place on earth. The best we can do is piece together bit by bit
and listen to what resonates with our soul at this time. We are here to
learn love of the other even when the other is "not worthy". And what
resonates with us on our journey may change as we learn more what fits
and works and what does not. I was astounded last night to read a blog
post on one of the earliest blogs I ever read, to see how far the person
who runs it has come. And I applaud her! The light is getting in! We
are learning to discern from the heart for that's our connection to the
divine.

“Care about what other people think

and you will always be their prisoner.”

OUT OF MIND » PERCEPTUAL AWARENESS » THE SHIFT IN CONSCIOUSNESS » What Do You Mean WE Kemosabe?