Washington Is About to Decide Whether Human Remains Should Become Compost

Washington Is About to Decide Whether Human Remains Should Become Compost Mon Apr 29, 2019 1:07 pm

Why settle for ashes when you can nourish a tree?


A person who dies in Washington has the option of being either buried or cremated. But when the legislative session opens on Monday, life after death could become a lot more interesting: State Senator Jamie Pederson plans to introduce a bill allowing bodies of the deceased to go through the process of “recomposition.” Instead of transforming from ashes into dust, the dead could become the compost nourishing a tree.
Traditional afterlife practices are notoriously energy costly and are terrible for the environment. Recomposition, meanwhile, is an environmentally friendly way to return to the earth, conceptualized by Katrina Spade in 2012 while she was studying architecture in graduate school. Now, Spade is the founder of a public-benefit corporation called Recompose who dreams of opening the world’s first public recomposition facility in 2020.
“Recomposition offers an alternative to embalming and burial or cremation that is natural, safe, sustainable, and will result in significant savings in carbon emissions and land usage,” Spade says. “We look forward to working with our state’s elected leaders to approve this new alternative to traditional after-death practices.”

An artist's vision for a future recompose facility.
Some Washington residents are already on board with recomposition as their afterlife option. In November, 84-year-old Sonia Baker told the Seattle Times that she hopes she’ll be recomposed and spread around an apple tree that grows on her granddaughter’s property, when the time comes.
Spade’s idea, which stemmed from her disappointment in the mainstream funeral industry and the poor environmental ethics of cremation and burials, is now poised to become the new normal. After a successful Kickstarter campaign in 2016, Spade transitioned her nonprofit Urban Death Project to Recompose and partnered with Washington State University, leading to a pilot program led by Lynne Carpenter-Boggs, Ph.D..
They became a ‘beautiful, compost-like material I would have been happy to take home and use in the gardens.’
Carpenter-Boggs, fittingly, is an expert in soil sciences who hypothesizes that the methods used for livestock mortality composting could be effective for human disposition, to use the industry term. Composting livestock is nothing new: Farms across the country, including a third of Washington’s dairy farms, compost the bodies of dead livestock. For Recompose, Carpenter-Boggs changed the materials of composting to “socially acceptable” options, adapted the basic principles, and created a process that works for humans.
The process begins with placing an unembalmed person, wrapped in a shroud, into a 5-foot-by-10-foot cylindrical vessel. Crucial organic materials, like wood chips, alfalfa, and straw, are stuffed inside too. During the process of composting, microorganisms break down organic material and produce carbon dioxide, water, heat, and the organic end product. Air, periodically pulled into the vessel, accelerates the microbial activity. Any potential pathogens are destroyed by the heat naturally generated by the microbes. Through their actions alone, the vessel can reach a temperature of 131 degrees Fahrenheit. 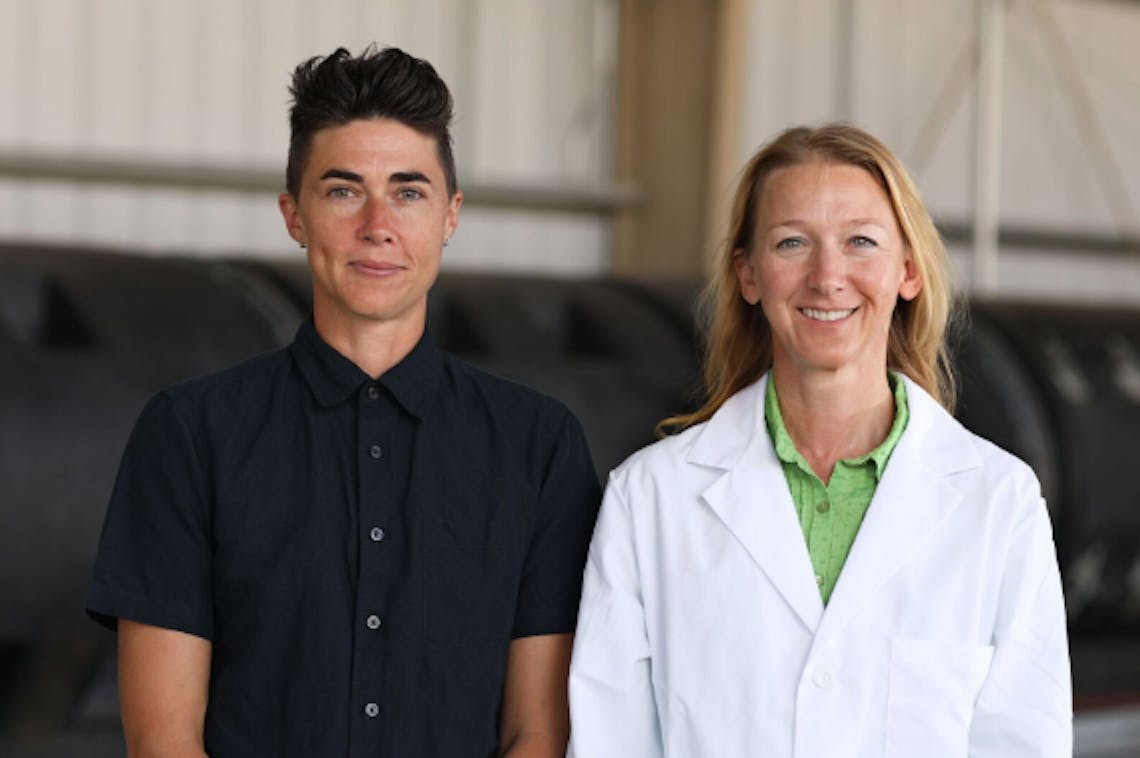 Katrina Spade and Dr. Lynne Carpenter-Boggs
Between March and July 2018, Spade and Carpenter-Boggs conducted this process on six deceased people who had donated their remains to the research. In 30 days, their bodies turned into, in the words of Carpenter-Boggs, a “beautiful, compost-like material I would have been happy to take home and use in the gardens.” The bodies had broken down into their natural elements: nitrogen, amino acids, and phosphorous.
We’re in a good position to say it’s safe, effective, and environmentally friendly.
Recomposition, Carpenter-Boggs and Spade claim, uses just one-eighth of the energy of cremation and saves over a metric ton of CO2 per person compared to traditional methods. If every deceased Washington resident chose to be recomposed, a half-million metric tons of CO2 could be saved in ten years. Cremation, meanwhile, requires about two SUV tanks’ worth of fuel.

Their study documenting this process will be published sometime this year, possibly even after Washington decides to make recomposition a legal option for the dead, alongside another method called alkaline hydrolysis. The current law, Pedersen told the Seattle Times in November, “reflects concerns as old as organized religion about spreading dangerous pathogens.”
“Now that the testing has happened at WSU,” she said, “we’re in a good position to say it’s safe, effective, and environmentally friendly.”
Media via Recompose, Katrina Spade/Kickstarter, Unsplash / Benjamin Combs