State of emergency for Canada and the worst is yet to come in unprecedented flooding Mon Apr 29, 2019 1:28 pm

State of emergency for Canada with some water levels expected once every 1,000 years and the worst is yet to come in unprecedented flooding 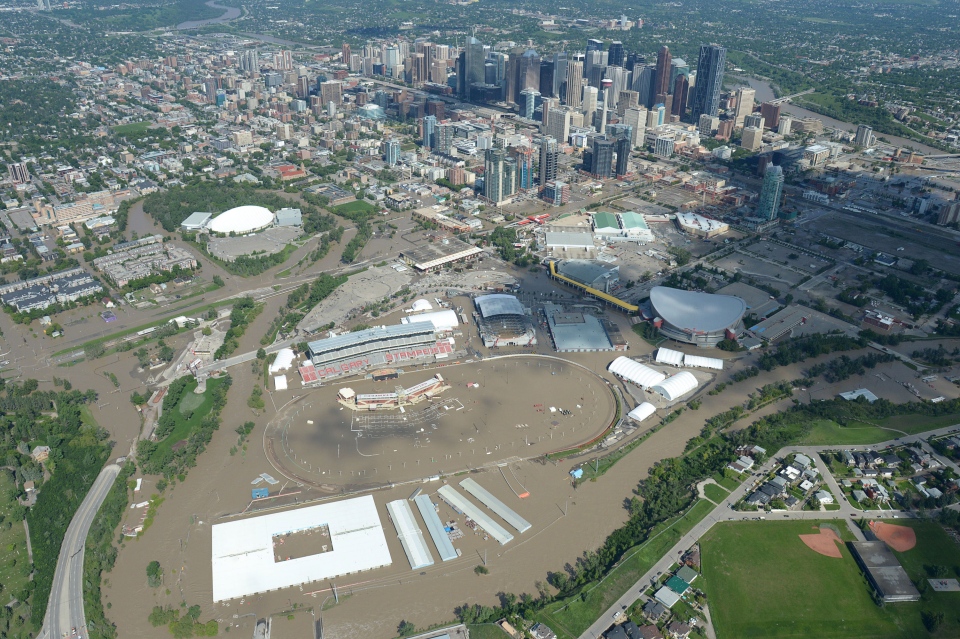 Flood-weary communities in Manitoba, New Brunswick, Ontario, and Quebec are preparing for a critical weekend as rising water levels force thousands to evacuate their homes. Rain is expected in Ontario's cottage country, stretching east into Quebec and Atlantic Canada. Montreal, Ottawa and many smaller communities have declared states of emergency, prompting the federal government to deploy hundreds of soldiers to help with sandbagging and other relief operations. "We're all just putting our shoulder to the wheel in the most effective way, to make sure that the personnel and the resources are available to fight the immediate disaster," Public Safety Minister Ralph Goodale said. But worried residents are watching as water levels rise fast, with little respite in sight. "We are watching the next system, possibly Wednesday into Thursday another huge system that will be sweeping across southern and central Ontario and southern Quebec," Gerald Cheng from Environment Canada told CTV Toronto. The worst is yet to come for Ottawa according to Patrick Nadeau, executive director of Ottawa Riverkeeper, which works to protect the Ottawa River and its tributaries. "What we're seeing for the Ottawa area right now is that the peak is set to come around Monday or Tuesday," he told CTV News Channel. The city issued a state of emergency on Thursday. "Those levels could be over half a metre from what we're seeing right now." Despite a night that gave Ottawa a break from the rain, water levels around the capital region are expected to rise half a metre higher than they did during a 2017 flood that was thought to have been a once-in-a-century event. Brian Streatton, engineering manager at the Rideau Valley Conservation Authority, told CTV News Channel that the river is the highest it's ever been. "People that live along the Ottawa River from Ottawa down to Montreal are getting flooding at the highest level we've ever seen," he said.

"There was a high snowpack this year throughout the entire Ottawa River watershed and we've had some major precipitation events over the last couple of weeks." Environment Canada has issued a special weather statement forecasting up to 35 millimetres of rain in the Ottawa region. Four hundred soldiers have been deployed to help battle the flood water. A large focus is being put on the Constance Bay area, which is considered one of the worst-hit areas. Prime Minister Justin Trudeau visited Constance Bay on Saturday morning, where he spoke with local volunteers. Trudeau and his two sons helped with sandbagging. Dozens of volunteers, including players from the Ottawa 67's hockey team, also helped with the flood relief. Others donated food to help those in need. A morning report from the board that monitors levels in the Ottawa River near Constance Bay says water levels are just shy of their 2017 levels and are forecast to rise another 47 centimetres. At a measuring spot near Parliament Hill, where paths and parking lots along the river are already underwater, the board forecasts a rise of another 75 centimetres before water levels peak on May 1. Nadeau says flooding like this is becoming the new normal, adding that better coordination is needed. "We need sustained investment in our conservation authorities that help to plan for these disasters." Increased winds also hampered sandbagging efforts, causing waves to crash over walls protecting homes. Ontario Provincial Police are discouraging motor boats from going close to shore, after reports of wake causing additional damage to nearby homes. Officials announced Saturday night that the Chaudiere Bridge over the Ottawa River would be closed as of 6 a.m. on Sunday,due to flooding and high waters. The Ottawa River is expected to rise another 55 centimetres by Tuesday. Efforts are also underway to protect the Britannia Water Treatment plant, which purifies water for more than half of Ottawa. If flood waters block the road leading to the plantdeliveries of purifying chemicals will be threatening safe water supplies, officials said. There are also flood warnings in several other areas of Ontario, which includes the province's cottage country. Bracebridge Mayor Graydon Smith asked cottage owners not to come to their properties to check for the damage this weekend because there are a lot of roads closed. "Don't try and be a hero," he said. Bracebridge saw some snow overnight and about 34 mm of rain at nearby Muskoka airport. Smith said the late-season snow is a welcome sight as it acts as a "sponge" for rising floodwaters that now mark a "historical event." Property owners have been advised to wait until the emergency passes before checking on cottages.

Quebec: Rainfall warnings have been issued for the southern half of Quebec, with some areas expected to see another 60 mm of rain. Water at the Chute-Bell dam, built in 1915, has reached levels expected once every 1,000 years, but Hydro-Quebec said it's confident the structure is solid. Provincial police were patrolling homes and cottages along the Rouge River, about 140 kilometres west of Montreal, where 75 people were forced to evacuate over fears the flood waters could overwhelm the dam. Meanwhile, soldiers with the Canadian Armed Forces were dispatched to reinforce a dyke in Pointe-Calumet, northwest of Montreal, that was threatening to give way. Quebec authorities said that as of Saturday morning, 3,056 homes across the province were flooded and 2,736 were surrounded by water. About 2,000 people have so far been forced from their homes. Just in the city of Rigaud, near the Ontario border, 685 people have left their houses where a mandatory evacuation order is in place. Officials say by Sunday, water levels could surpass those seen two years ago. Montreal and 13 other municipalities have declared states of emergency in Quebec. Flood waters in Gatineau are expected to take weeks to recede. Some 1,800 homes there are in the flood zone, with about 4,000 people at risk. Around 750 have asked for help. Quebec's Public Security Minister Genevieve Guilbault said Saturday about 50 landslides have been reported across the province. "The situation is changing hour by hour," Stephanie Picard, spokesperson for Canadian Red Cross, told CTV News Channel. The Red Cross has 10 centres across Quebec to help those affected by the floods, she said. "Last night (Friday) we provided safe shelter for close to 500 people who had no other option but to turn to the Red Cross to have a safe place to sleep," she said. In Montreal, the Galipeault Bridge, which connects Ile-Perrot to Montreal's West Island, is closed until further notice due to rising water. In Rigaud and Point-Fortune, residents have been defying mandatory evacuation orders. According to Rigaud Fire Chief Daniel Boyer, only 10 out of 170 homes had been evacuated as of Saturday.

New Brunswick: Meanwhile, the Saint John River has been receding in Fredericton, where parts of the downtown core were underwater this week. Geoffrey Downey, a spokesperson for New Brunswick Emergency Measures Organization, said while it's raining across much of the province on Saturday, officials aren't expecting a lot of precipitation. The Red Cross has registered 940 evacuees from 330 households in New Brunswick as of Friday afternoon. Red Cross officials in New Brunswick said Friday 70 per cent of the people asking for flood assistance this year also asked last year. Premier Blaine Higgs told reporters that with two floods in as many years it's clear climate change is affecting flooding frequency, and his new Conservative government will take this into account in future planning. The latest forecast predicts waters will slowly recede in most areas over the next five days.


Manitoba: In southern Manitoba, the rising Red River has forced some road closures and a small number of evacuations near St. Jean Baptiste but earlier predictions for major flooding between the U.S. border and Winnipeg haven't come to pass.

» Flooding brings Indonesia to it's knees and the worst is yet to come!
» State of Emergency In Montreal from Flooding, Hundreds of Troops Deployed
» Temperature Anomaly - "Unprecedented" flooding affects OVER 100,000 cattle
» NOAA Warns Unprecedented Flooding Could Last Until July, 200 Million People At Risk
» State Of Emergency Declared As Venice Hit By Worst Floods In 50 Years