Starlink could transmit internet down to the ground.

SpaceX has been given the thumbs-up from the Federal Communications Commission to start building global internet service via thousands of satellites that could offer internet to anyone on the planet.

SpaceX CEO Elon Musk is proposing a system with many more satellites and much lower latency than existing satellite internet service providers. The satellite internet industry is also expected to greatly eclipse SpaceX’s commercial launch business, where it currently makes its money by sending up various satellites and space craft for government and telecommunications clients. As Musk has often said, all of this business is in service of his goal to make humanity a multi-planetary species, starting with going to Mars.

“This approval underscores the FCC’s confidence in SpaceX’s plans to deploy its next-generation satellite constellation and connect people around the world with reliable and affordable broadband service,” company president Gwynne Shotwell said in a SpaceX press release after the approval was granted on Friday. 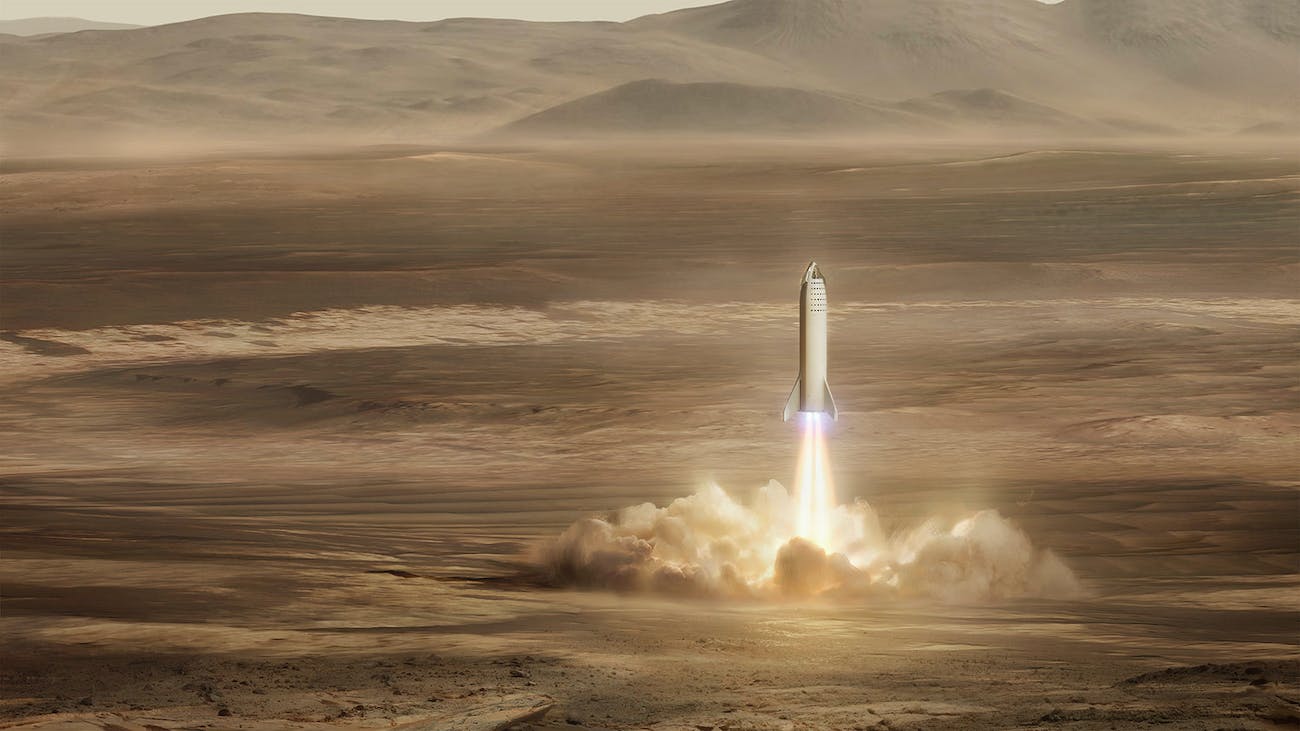 SpaceX's BFR landing on Mars.
The constellation of over 4,000 satellites was first outlined by Musk in 2015, which he declared was a way of “generating revenue to pay for a city on Mars.” This is coupled with advancements in landing rockets, which reduces the $62 million cost associated with manufacturing new Falcon 9 and stronger rocket designs capable of sending larger satellites into space for commercial clients.

While the commission had previously OK’d a series of Starlink satellites, this latest approval makes a few tweaks to the setup. The constellation has shrunk by 16 to cover just 4,409 satellites, each weighing around 850 pounds, and 1,584 of them have been moved from their 1,150-kilometer altitude to a much lower 550 kilometers. The lower altitude will bring latency down to 15 milliseconds, SpaceX claims. However, rivals OneWeb and Kepler Communications both claimed the lower altitude could cause interference, something the commission denies.

SpaceX Starlink: How Will the Internet Satellites Work?

Satellite internet promises broader access to a wider range of people than traditional cable-based networks, but latency has been a major issue. A 2013 analysis found satellite systems could reach latency of 638 milliseconds, around 20 times slower than wired. That means that while data could download at a comparable speed to regular connections, the slow response times would make gaming and other reaction-sensitive activities sluggish.

Musk claims Starlink will be lower latency enough to power video games. Access will be delivered to users through a ground terminal the size of a pizza box, differentiating it from other services that beam directly to the device. SpaceX filed with the FCC for permission in February for 1 million fixed-Earth stations that will communicate with the satellite array. These systems use steered antenna beams to communicate with the satellite it can see in the sky. SpaceX tested this setup in February 2018 by launching two test satellites communicating with six ground stations. 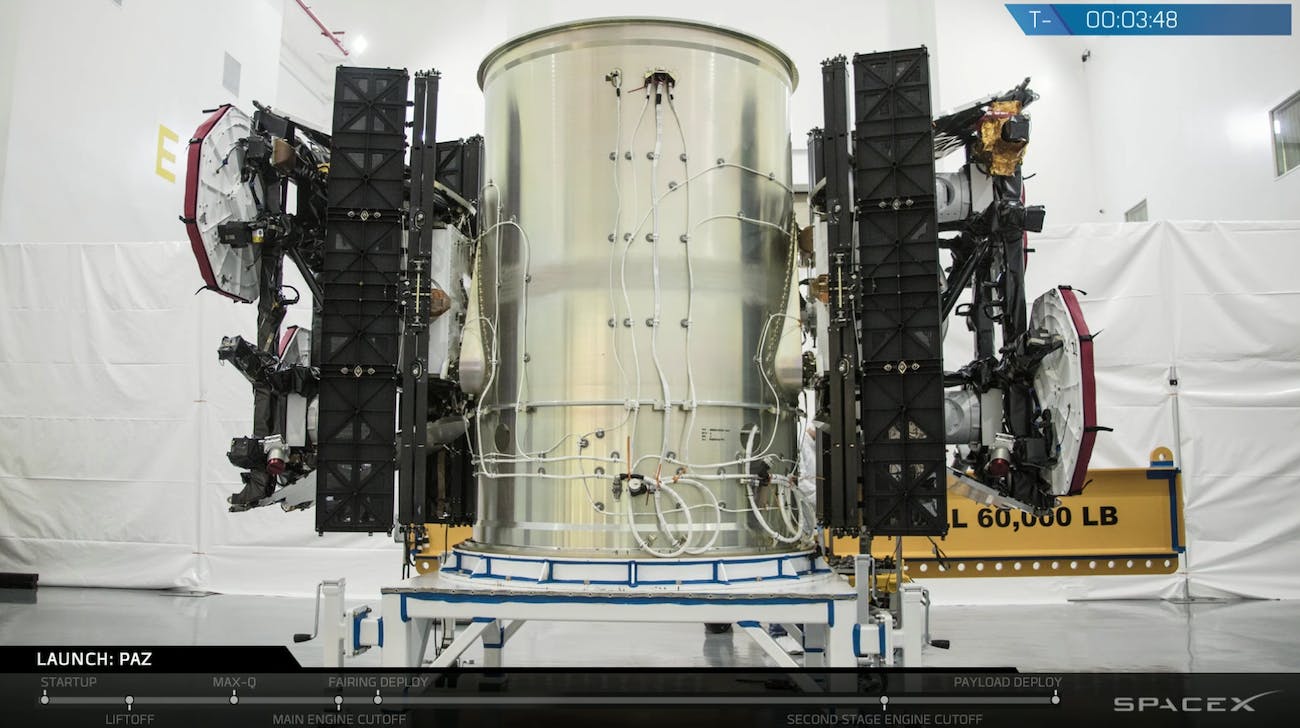 One of two satellite internet demonstration satellites launched by SpaceX on February 22, 2018. They were called Tintin A and Tintin B.
The new proposals make some key adjustments to these plans that could improve the long-term viability of the project. Mark Handley, a professor of networked systems at University College London, told Inverse in November 2018 that a lower orbit means the satellites will stay up for around five years once defunct before falling to Earth unlike the original design that could have led to satellites floating around for decades creating space junk. There’s also more space between each satellite, of 90 kilometers instead of 40, reducing the chances of collisions.

Overall, Handley explains, the system could halve communication times between London and Singapore, in part because light in a vacuum is 50 percent faster than light through glass, such as fiber optic, and also because fiber optic sometimes takes a less direct path. Starlink will use lasers to communicate with others in the array, forming a fast-moving global network.

As a private company, SpaceX’s finances are a bit of a mystery. Shotwell told CNBC in May 2018 that the company is profitable and has been for many years, with a valuation of around $28 billion. However, notes to investors seen by Bloomberg in November 2018 offers a less positive assessment, where earnings for the 12 months through September were positive to the tune of $270 million only when amounts that customers had already paid were included and non-core research and development costs were excluded. The company was otherwise in negative earnings without these changes.
Starlink could give create boost to SpaceX’s balance sheet. The company projected in 2017 that it could become bigger than its current business of launching satellites for third parties as early as 2020, reaching up to $20 billion revenue by 2025. Considering the whole commercial rocket launch industry brings in around $5 billion annual revenue, it could be a serious boost in cash flow.
The Wall Street Journal reported in December 2018 that investors are confident about the potential for the constellation, as it’s projected to eventually reach over 11,000 satellites, while the largest current system has less than 100 crafts. The reports came as SpaceX was seeking $500 million in funding for its project from investors. Shotwell has placed Starlink’s total costs around $10 billion.
The company laid off 10 percent of its workforce in a bid to keep costs lean. In a January earnings call for Tesla, Musk listed Starlink alongside the Mars-bound Starship vehicle as “two absolutely insane projects that would normally bankrupt a company … and so SpaceX has to be incredibly spartan with expenditures until those programs reach fruition.” 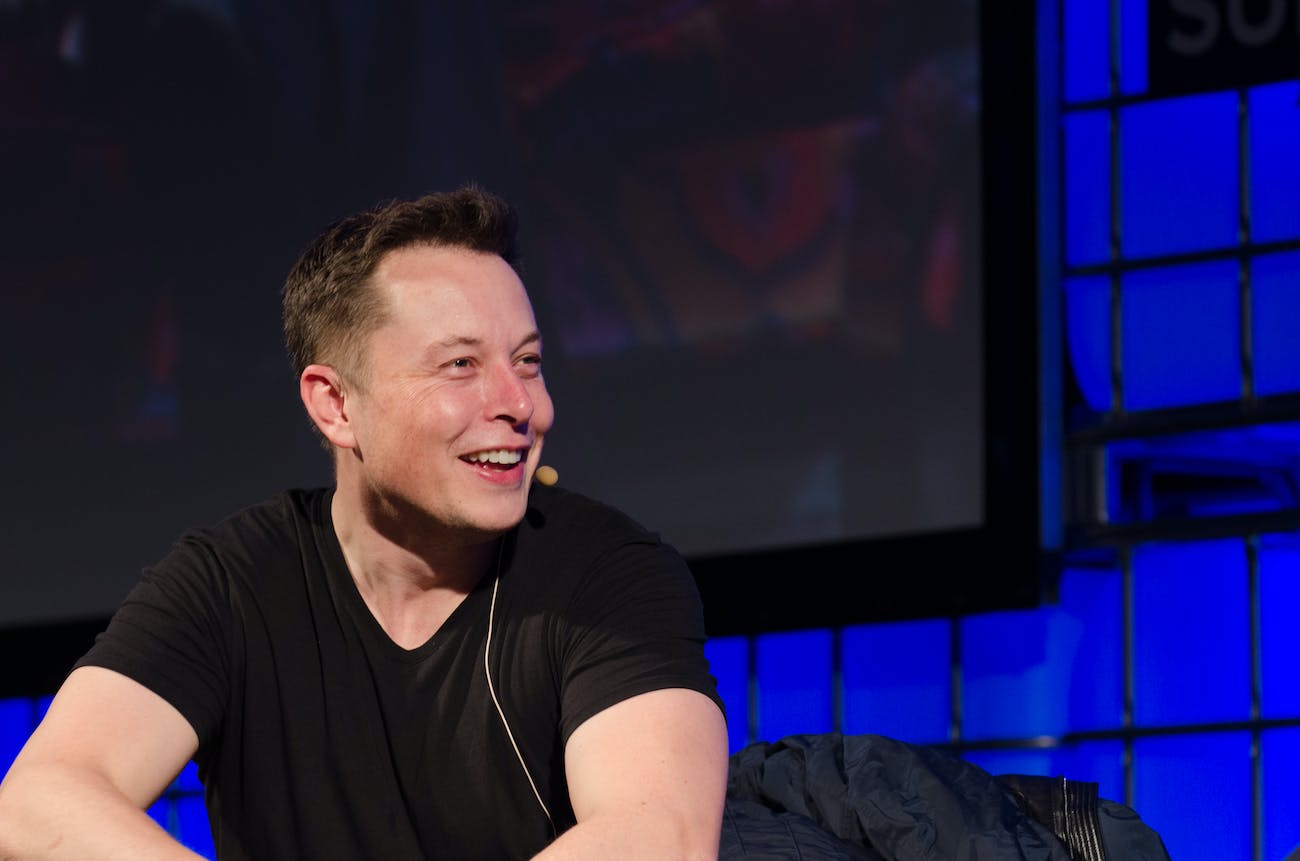 SpaceX Starlink: What Happens Next?

The commission’s approval has set the timer running on SpaceX’s plans. The company must now launch and start operating at least 50 percent of its planned constellation by March 29, 2024, less than five years from now. It must then complete the rest of the constellation exactly three years after that, meaning the firm is expected to get its full constellation running in eight years’ time.
SpaceX will also have to act fast as other firms have similar plans. Amazon CEO Jeff Bezos has been pushing Project Kuiper, a plan to send 3,236 satellites into space to develop a similar network. The first firm to successfully set up its thousand-satellite array and prove its viability could cause regulatory favor to dry up for the other.