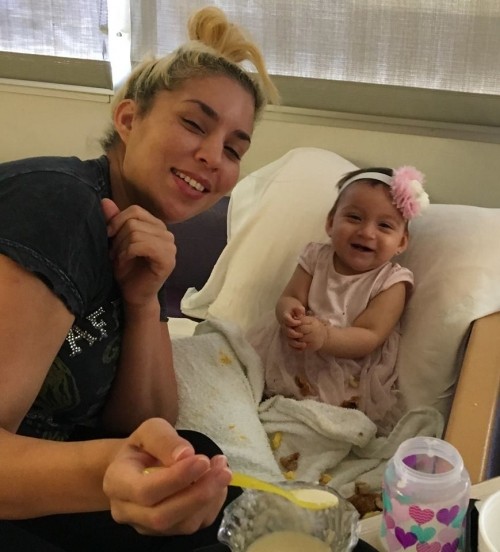 Baby Aniya suffered brain injuries after being injected with the Gardasil vaccine by mistake. Doctors and authorities refused to blame the vaccine, and her mother (a nurse) was blamed instead, and Child Protective Services removed the baby from her family. Story. Photo source: Justice for Aniya Facebook page.
Comments by Brian Shilhavy
Editor, Health Impact News
Vaccine injuries and deaths are a reality that is not in dispute. The only thing in dispute regarding vaccine injuries, is how many are harmed by vaccines?
In 1986 the National Vaccine Injury Compensation Program (NVICP) was passed into law giving pharmaceutical companies total legal immunity from being sued due to injuries and deaths resulting from vaccines.
Since then, over $4 billion has been paid out by the U.S. Government to vaccine injury victims. Health Impact News publishes the quarterly reports from the Department of Justice (DOJ) listing the vaccine injuries and deaths compensated by the NVICP.
See the latest one from March, 2019:

And yet, in the corporate-sponsored mainstream media, along with many public health organizations, this fact is often denied, and instead the religious-like belief that vaccines are “safe and effective” is presented as truth.
Here is an incredible interview on CNN with one attorney who represents families of vaccine-injured victims, where the host tells him he is wrong, simply because their TV doctor has pronounced vaccines “safe.”

This massive cover up of vaccine injuries has created a new minority class of people in the U.S. that face tremendous discrimination, from not being able to receive medical care for their vaccine injuries to being denied public education, to even losing one’s children if a parent dares to blame their child’s medical condition on vaccines.
No Mercy for Mothers Or Their Vaccine Injured Children
by Barbara Loe Fisher
The Vaccine Reaction
Today, parents whose children have been injured by vaccines are being demonized and discriminated against for speaking publicly about what happened to their children after vaccination.1
There is no other minority in America being subjected to public humiliation and censorship for simply speaking the truth.2
Pediatricians are also cruelly bullying and coercing mothers into giving vaccines to sick children already struggling with vaccine injuries that have compromised their health.3 4
These mothers are desperately trying to protect their children from further harm by refusing to give them more vaccines. Yet, many pediatricians are showing no mercy and insisting on implementing one-size-fits-all government vaccine policy regardless of the risk to these vulnerable children’s lives.5 6

Legislators Ignoring the People and Voting to Violate Human Rights

Vaccines are pharmaceutical products that carry two risks: a risk of harm and a risk of failure and those risks can be greater for some people because we are not all the same.
Even though there are vaccine science knowledge gaps and doctors cannot accurately predict who is more susceptible to being harmed by vaccination,7 some state lawmakers are also determined to force implementation of one-size-fits-all federal vaccine policies that recognize few contraindications to vaccination qualifying for a medical exemption.8 9
Despite historic public protests with thousands of parents and concerned health care professionals showing up at public hearings in state legislatures to oppose bills that strip religious and conscientious belief exemptions from public health laws, majority party legislators in Oregon, Colorado and Maine this week chose to ignore the people and voted to push forward bills that violate parental and informed consent rights.10 11 12 13
The people are standing up against medical tyranny in numbers never seen before in state Capitols. Brave legislators are speaking out, too, in an effort to resist the push by zealous health officials and medical trade associations to force parents to give their children every dose of every federally recommended vaccine without exception.
An Oregon legislator opposing a bill to eliminate the personal belief vaccine exemption in that state said,

“I believe this bill, if it passes the House and the Senate ultimately, truly is the beginning of the death of freedom.”

Public health policies and laws that prevent parents from exercising freedom of conscience and informed consent to vaccination for their minor children violate human rights.14
If doctors deviate from government vaccine policy, they are being demonized and discriminated against, too. In California, where parents have been prohibited from exercising religious or conscientious beliefs when making vaccine decisions for their children, a bill is sailing through the legislature that will strip doctors of their legal right to exercise professional judgment and conscience when giving a child a medical vaccine exemption.15 16
Laws that prevent doctors from exercising judgment and conscience when caring for children are immoral and dangerous.

The Cry for Vaccine Freedom Wall, which was launched on the website of the National Vaccine Information Center (NVIC.org) in 2009, contains first person testimonials of adult patients and parents of minor children who have been harassed, threatened, coerced and sanctioned for attempting to exercise freedom of thought, conscience and informed consent to vaccination.
Following is a testimonial posted on Apr. 7, 2019 on the Cry for Vaccine Freedom Wall by a mother with vaccine injured children:

My sons were 2 and 4 when my daughter was born. She began having seizures at birth and was very ill. The boy’s pediatrician refused to see her so I began searching for another one that would.
I should first mention that both of my boys had severe reactions to their vaccinations. The oldest had seizure activity with his 6-month vaccinations. He was referred to a neurologist at 9 months old who told me he probably had autism. That didn’t make sense to me at all. I held off on any other vaccinations until he was 15 months old and again, it triggered seizure activity.
I decided to do delayed vaccination with my second son. His first vaccines were at 5 months old and soon after, he got his first double ear infection. From then until he had tubes put in his ears at 11 months old, he had non-stop double ear infections. The tubes fixed the issues he was having with his hearing as a result of fluid buildup and he started learning words left and right. I would consider his speech at that point to be advanced.
I took him in to receive a vaccination at 13 months of age and he lost every single word, even mama and dada. Today, at the age of 13, he has multiple learning disabilities and still receives speech therapy for delays.
I began interviewing different pediatricians and settled on one that agreed to let me go at my own pace with the vaccinations. Soon after the switch, I took my then 18-month-old and most recent vaccine-damaged son for a checkup. The doctor proceeded to ask me which vaccination he was receiving that day. I told him we wouldn’t be getting any that day and he began to argue with me, stating I had told him I would give him one every visit and stating the research that supported the safety of vaccines. He spent a good 20 minutes bullying me into giving my child a vaccination and when I wouldn’t give in, he kicked us out of his practice in front of staff and other patients.
After watching both of my boys slip away in one form or another as a result of vaccinations, I wasn’t about to let someone bully me into giving them something I firmly believe would have further harmed them. But I was scared. The doctor wanted to scare me, wanted to belittle me, and wanted to bully me into doing things his way.
If this same situation happened in regard to anything other than vaccines, it would be considered abuse. The doctor would have abused me, but I also would be abusing my children by knowingly causing them harm.
It seems very black and white to me and it’s time that it stopped!17

Yes, it is time that doctors and lawmakers to care about the children who are born healthy but cannot get through the process of vaccination without suffering severe reactions that permanently damage their health.18 It is time for doctors and lawmakers to have compassion and show mercy to mothers instead of demonizing, bullying and punishing them for trying to protect their children from harm.
Read the full article at TheVaccineReaction.org.