Bayer and the ownership of all life

Bayer and the ownership of all life


May1  by Jon Rappoport

by Jon Rappoport
May 1, 2019
(To join our email list, click here.)
In a recent article, I explained how Bayer—with its $66 billion purchase of Monsanto—is “taking one for the team.”
The team consists of several biotech giants. Its agenda? The reconfiguring of all life under the rubric of radical genetic manipulation. Bayer aims, long-term, to swallow the universally hated Monsanto whole and make it disappear, as if it never existed. It’s called re-writing history. The goal in this case: protection of the evolving reputation of a genetic Brave New World.
Here is a very brief background sketch of Bayer—
After World War 2, the highest ranking scientist on the executive board of IG Farben, the infamous Nazi cartel, Dr. Fritz Ter Meer, was put on trial at Nuremberg. The charges? Mass slavery and murder.
Farben had built a rubber factory at Auschwitz. In fact, it built Auschwitz in order to ensure cheap labor in its adjoining rubber factory. Farben paid the SS to send over inmates every day of the week to work in that factory. Those who were too weak to make it through the day were killed.
Well, for all this, Fritz Ter Meer was given seven years in jail. A pathetic seven years.
…Sixteen years later, on August 1, 1963, the Bayer Corporation was celebrating its hundredth anniversary at Cologne. Big festivities.
The three largest original components of IG Farben—Bayer, Hoechst, and BASF—were back in business and roaring on profit highs. They were now sanitized separate corporations, no longer parts of an official Nazi-aiding IG Farben.
The keynote speaker at the Bayer celebration was the one and only Fritz Ter Meer.
Out of jail.
Murderer.
Mass murderer.
Anointed chairman of the supervisory board of Bayer.
Chairman. Of the Supervisory Board. Of Bayer.

(To read about Jon’s mega-collection, The Matrix Revealed, click here.) 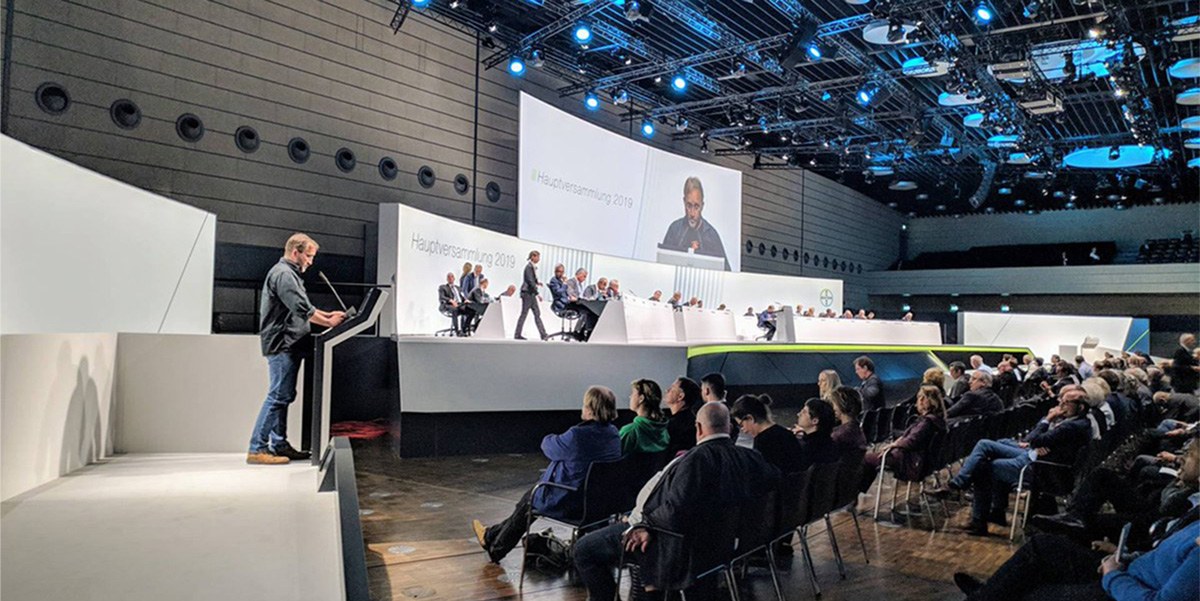 Christian Russau addressing Bayer Shareholders. Image Source.
Critical shareholder holds Bayer to account at the company’s annual general meeting
by GMWatch.org
Excerpts:
Bayer CEO Werner Baumann recently lost a crucial confidence vote as investors questioned his handling of the $63 billion Monsanto deal and the wave of US lawsuits that followed.
In what Bloomberg called “a stunning development for the German drugs and chemicals company”, about 55 percent of shareholders voted against absolving Baumann and other managers of responsibility for their actions in the takeover last year.
The vote threw Baumann’s future into question and prompted an immediate supervisory board session.
While the supervisory board ignored the unprecedented vote, investors are not happy with the directors’ decision to back Baumann and his strategy.
While much of the investor unrest undoubtedly focuses on financial liability, strong concerns are being raised about Bayer’s ethics.
At Bayer’s annual general meeting, Christian Russau from the umbrella organization, the Critical Shareholders, made a speech in which he launched a scathing attack on the company for its “double standards”.
According to Russau, Bayer sells pesticides in Brazil that are banned in the EU.
Russau noted that in 1988, Bayer CEO Hermann J. Strenger refused to set double standards. He said,

“We make the same requirements of our investments in Brazil or India, in the US, or in Japan, as [in Germany].”

Yet 31 years later, he said, Bayer still sells in Brazil some herbicides, insecticides and fungicides with active ingredients that are banned in Europe.
So it is operating according to a double standard. Russau accused Bayer CEO Werner Baumann of complicity with this double standard, in an “unspeakable historical continuity”.

Why is the focus on Brazil? Russau said,

“Because Brazil is at the center of Bayer’s growth interest.”

Addressing Baumann directly, he added that the Bayer CEO said at the 2018 Annual General Meeting that Bayer’s interest in acquiring Monsanto would be in the seed sector and in the growth of that sector:

Russau said he feared that companies such as Bayer will continue to participate, perhaps more than ever, in the sale and distribution of highly toxic agrochemicals in Brazil.
As a survival tactic in the face of Monsanto’s multi-billion dollar acquisition, Bayer will go for growth at any price. Any poison which can be sold will be sold.
Read the full article at GMWatch.org

» Gillian MacBeth-Louthan – Value Your Life And The Monumental Creation That You Are. Allow What You Have Ownership Of. Ot Gain Value Through You – 18 March 2014
» Patents, Biodiversity, and Genetic Ownership
» The Legal Ownership of All Souls by the Vatican… Since 1306!
» Bayer and Monsanto are facing the music
» Trace Corona Virus Ownership and Vaccine