The company still isn't commenting on that leaked video. 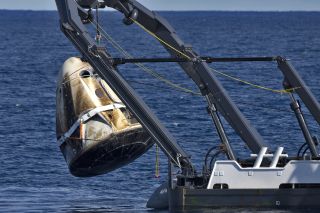 A recovery ship hauls SpaceX's first Crew Dragon capsule out of the Atlantic Ocean after the spacecraft's splashdown on March 8, 2019. The capsule was destroyed April 20 during an abort system engine test.
(Image:

A SpaceX Crew Dragon capsule was indeed destroyed during engine tests that went awry last month, a company representative said today (May 2).
On April 20, SpaceX conducted a series of tests on the vehicle — which last month flew a successful uncrewed demonstration mission to the International Space Station (ISS) — on a stand at Florida's Cape Canaveral Air Force Station.
Firings of the capsule's small maneuvering Draco thrusters went according to plan, but things went south when the SpaceX team got ready to engage the SuperDraco abort engines, which are designed to rocket Crew Dragon away from danger in the event of a launch emergency.
Related: SpaceX Dragon Accident a Bump in the Road for Commercial Crew
"We fired them [the Dracos] in two sets each for 5 seconds, and that went very well," Hans Koenigsmann, vice president of Build and Flight Reliability at SpaceX, told reporters today (May 2) during a press conference previewing the company's planned cargo launch to the ISS early tomorrow morning (May 3). "And then, just prior, before we wanted to fire the SuperDracos, there was an anomaly and the vehicle was destroyed."

Acknowledgement of the capsule's loss confirms rampant speculation based on a leaked video that circulated via social media shortly after the accident. Koenigsmann declined to comment on the accuracy or origin of the video.
It's too early to identify the cause of the mishap, which remains under investigation, Koenigsmann stressed.
"But the initial data indicates that the anomaly occurred during the activation of the SuperDraco system," he said. Activation involves pressurizing the system, he explained: "You make sure everything's primed in — you open valves, you close valves."
The SpaceX team doesn't think the problem lies with the SuperDracos themselves, Koenigsmann said. The engines have endured more than 600 tests at the company's Texas facility, he noted, and performed well during a 2015 "pad abort" test.
Before the April 20 anomaly, SpaceX had aimed to perform a "launch abort" test with this same Crew Dragon vehicle soon — perhaps as early as June. That uncrewed jaunt will put the SuperDracos through their paces during an actual launch.
Related: The Emergency Launch Abort Systems of SpaceX and Boeing Explained
The next test after that will involve a different Crew Dragon capsule, which SpaceX will launch to the ISS with two NASA astronauts aboard. This mission, known as Demo-2, was targeted to occur as early as July. (Last month's uncrewed ISS mission was Demo-1.)
Operational flights to the orbiting lab, which SpaceX will conduct under a $2.6 billion contract it signed with NASA in 2014, will follow. Both SpaceX and NASA had stated that they hoped this would happen by the end of the year. (Boeing has a similar commercial-crew deal, which it will fulfill using its CST-100 Starliner capsule and United Launch Alliance Atlas V rockets.)
The accident puts all of these target dates in serious doubt, of course. But the investigation is still going on, so it's too soon to know just what the impact will be on Crew Dragon's flight schedule, Koenigsmann said.
"I hope this a relatively swift investigation at the end of the day, and I don't want to completely preclude the current schedule," he said. "It's certainly not great news overall, but I hope we can recover [quickly]."
A quick recovery is possible, Koenigsmann added, given that SpaceX does not have to start building a new Crew Dragon vehicle from scratch. The company already has multiple capsules in various stages of production, he said.