The tale is like something out of the movies: a mysterious beluga whale swims into the open waters of a northern Scandinavian town, seemingly on a military mission from a rival abroad, before revealing himself to be quite ill-fitted for his top-secret mission.

Such was the case in Hammerfest, Norway, where a small white beluga—assumed to have been trained by the Russian Navy—seems to have defected and joined his new Norwegian friends.

And as it turns out, the whale not only lacks the mettle of an alleged spy—he’s actually super-kind, too!

Norwegian authorities had previously confirmed that the whale—who had been originally found wearing a harness reading “Equipment St. Petersburg”—was conspicuously floating around the waters of the port city for some time and had only moved about 25 nautical miles in a week.

Upon being freed of his harness and reintegrated into “civilian” life, the whale quickly gained a reputation for being fond of human company—strange behavior for your typical beluga whale, a whale which tends be quite shy around humans.

Not so with this unnamed chap who lets strangers in the town pet his nose whenever they feel like it.

And the rapport he apparently has with locals went even further when the whale recently came to the rescue of a young lady who was the victim of a minor mishap, according to The Dodo.

Ina Mansika and her friends visited the Hammerfest waterfront to visit the so-called “defector,” who quickly came out to greet them. At that point, something truly amazing happened.


“We laid down on the dock to look at it and hopefully get the chance to pat it. I had forgotten to close my jacket pocket and my phone fell in the ocean. We assumed it would be gone forever, until the whale dove back down and came back a few moments later with my phone in its mouth!”

The stunning incident was caught on video:

Re: BACKLASH: Friendly Whale Returns Phone Woman Accidentally Dropped Into the Sea Wed May 08, 2019 10:20 am 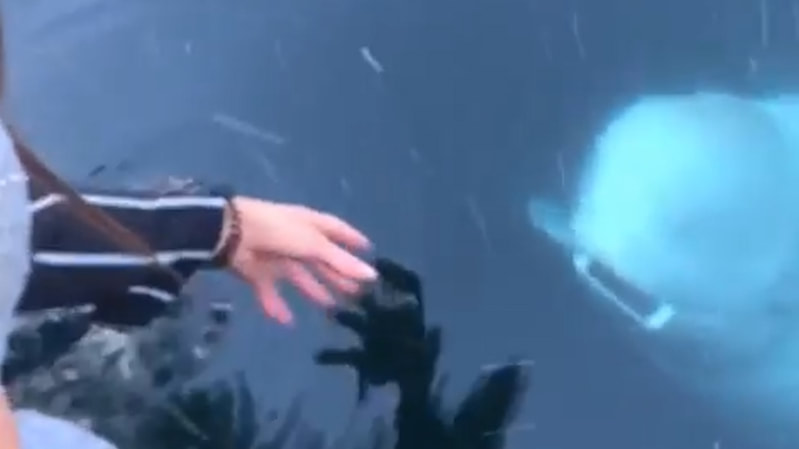