Fire in the sky! Very rare BLUE auroras and STEVE phenomenon appear in the sky over Calgary, Canada – And the next CME arrives on May 15th!
By
Strange Sounds
-
May 13, 2019


Northern Lights are usually green, sometimes red. Those are the colors we see when oxygen is hit by electrons raining down from space during a geomagnetic storm. On Friday night, May 11, 2019, however, Harlan Thomas of Calgary, Alberta, witnessed a different color: DEEP BLUE 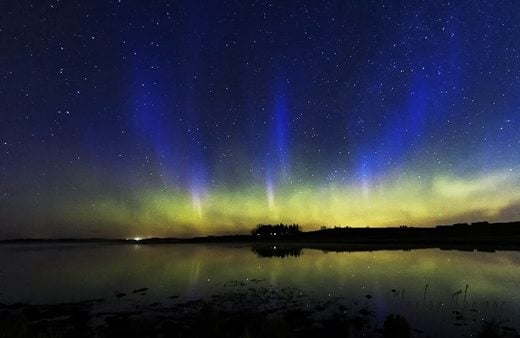 Harlan Thomas: “To see these incredible blue pillars was out of this world,” says Thomas. Picture via SpaceWeatherGallery
In auroras, blue is a sign of nitrogen. Energetic particles striking ionized molecular nitrogen (N2+) at very high altitudes can produce a blue glow rarely seen during auroral displays. In this case, it was the afterglow of a CME impact.
The CME left the sun on May 6th, propelled in our direction by an explosion in the magnetic canopy of sunspot AR2740. When it finally arrived on May 10th, the slow-moving storm cloud rattled Earth’s magnetic field, triggering a minor G1-class geomagnetic storm. Auroras were sighted in parts of Canada as well as US States such as Michigan and Minnesota.
“To top it off, STEVE appeared for several minutes as well,” says Thomas, who captured it in this shot: Picture of Steve phenomenon by

Harlan Thomas via SpaceWeatherGallery
STEVE is a hot (3000 degrees C) ribbon of ionized gas slicing through Earth’s upper atmosphere some 300 km above the ground. It appears unpredictably during some, but not all, geomagnetic storms. Originally thought to be a form of aurora borealis, new research shows that it is not an aurora at all.
The soft purple color of STEVE may also be caused by emissions from nitrogen, according to a new study just published in the Geophysical Research Letters. Coincidence? STEVE and blue auroras seem to share a connection to the 7th element on the periodic table.
Blue auroras are most often seen during intense geomagnetic storms – yet this was a relatively minor storm. Why nitrogen-blue overtopped the usual hues of oxygen on May 11th is unclear. It just goes to show, auroras still have the capacity to surprise. Anyway, to see these incredible blue pillars MUST HAVE BEEN out of this world.
Keep your eyes to the sky! Some more auroras ahead! Another CME is coming and its estimated time of arrival is May 15th. The solar storm cloud was hurled in our direction by a double explosion on the sun on May 10th-11th.