Death Of Free Press? Julian Assange Charged Under The Espionage Act On 17 Counts
May 24, 2019 Aaron Kesel 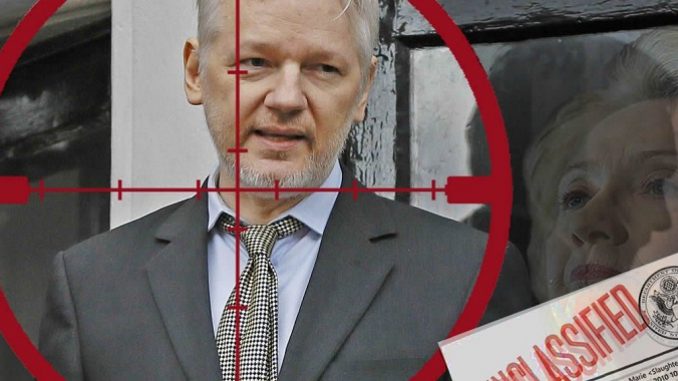 WikiLeaks founder and former editor Julian Assange has been charged under The Espionage Act on 17 new counts in a superseding indictment for his role in obtaining and publishing classified military and diplomatic documents prior to his extradition hearing on May 30th, Reuters reported. 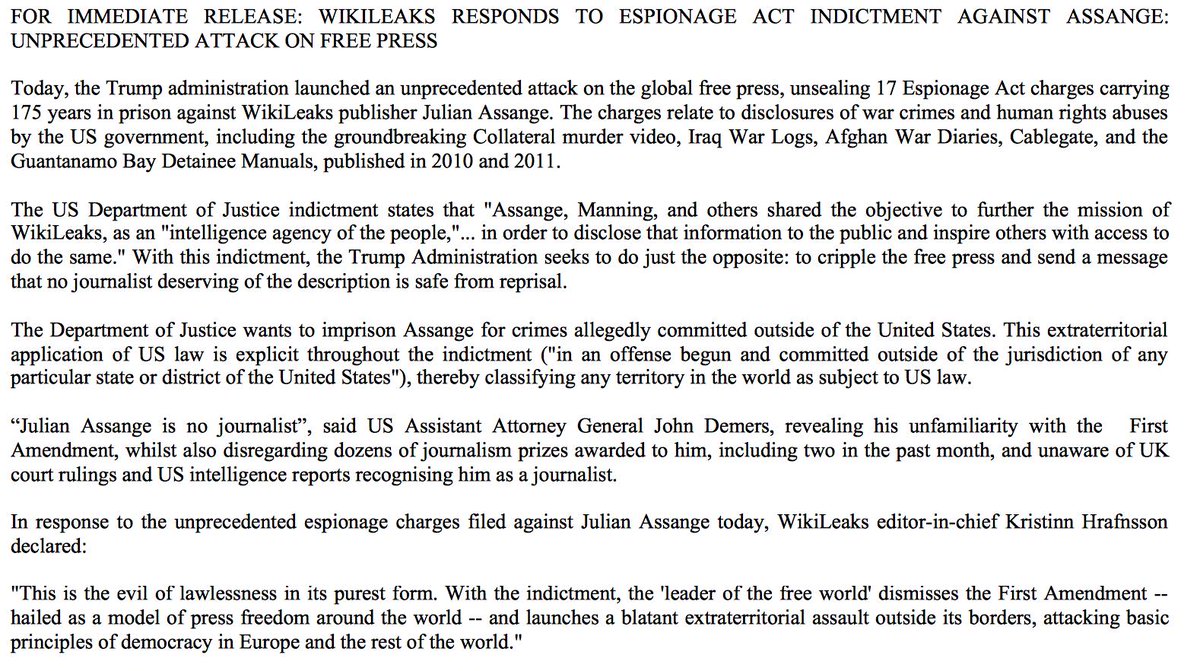 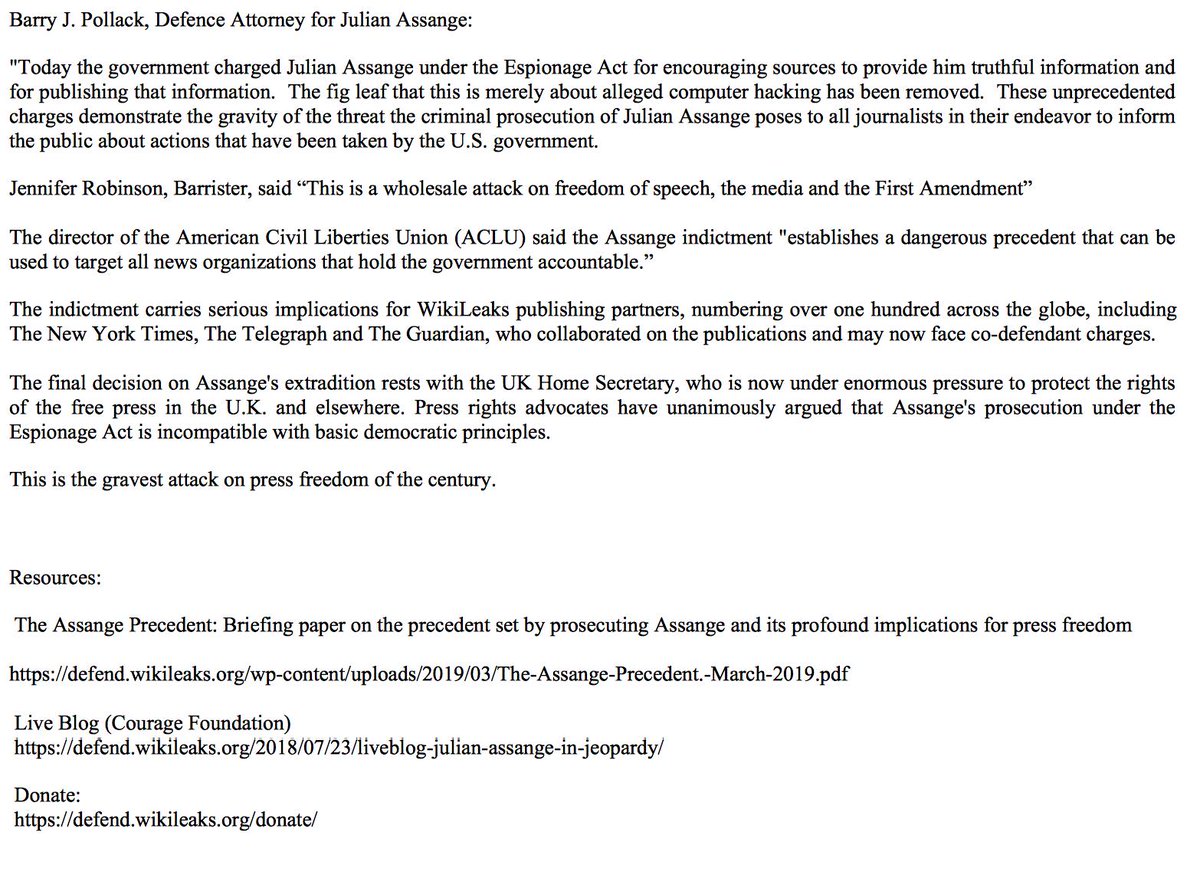 
The charges carry a shocking sentence of 175 years in prison if found guilty by the secret Espionage court — a horrendous statement to send to journalists and truth tellers.
“The Department of Justice wants to imprison Assange for crimes allegedly committed outside of the United States. This extraterritorial application of US law is explicit throughout the indictment… thereby classifying any territory in the world as subject to US law,” WikiLeaks wrote in a statement, adding,

Wikileaks: Ecuador is Being Run By “Criminals & Liars.” Assange’s Entire Legal Defense Given To The United States
Date: May 24, 2019Author: Nwo Report

What’s happening with Julian Assange is heart-breaking. He’s a hero, just like Edward Snowden. Government secrets are kept, not to protect ‘national security’ as commonly claimed, but rather to protect political and corporate interests. After all, the United States is evidently run by a small group of corporations. These corporations have a huge influence when it comes to dictating government policy, and they do not like those who disclose their secrets. For years, Wikileaks has been leaking documents that’ve exposed major corruption within multiple governments, including the United States and basically the entire western military alliance. They’ve exposed that our world operates very differently than how it’s been presented, and they’ve never had to retract a single story. They exposed the invisible government, or “the real menace of Republic,” a term coined by John F. Hylan, former Mayor of New York City. Hylan has said that the “invisible government, which like a giant octopus sprawls its slimy legs over our cities, states and nation.” He exposes the ones “who virtually run the United States government for their own selfish purposes.”  (source)
Transparency is what Julian Assange is all about, and the American empire and even the global empire have been desperately trying to keep their secrets and prosecute anyone or anything that threatens their secrecy. That’s what this is all about. And they proved that with Chelsea Manning.
It’s not just people like Assange who are being demonized and hunted, it’s alternative media as well. The war on ‘fake news’ that’s been happening for the last little while has resulted in alternative media outlets being labeled as ‘fake’, even if they’re presenting credible information and sources. Any media outlet who even questions a controversial issue has been labeled as ‘wrong’ or ‘fake.’
What is happening to Assange is extremely unjust, and should serve as a massive ‘wake up’ call for anyone who isn’t already ‘awake.’ Truth and free press threaten the ability of the global elite to continue their cycle of creating problems and then proposing solutions in order to achieve their desired outcome. Some of the biggest leaks WikiLeaks has made were when they revealed the connections between terrorist organizations like Al-Qaeda and ISIS to the western military alliance, and more specifically to the US government. Current presidential candidate and Congresswoman at the time, Tulsi Gabbard, even introduced a bill to stop this from happening.
Report this ad
We saw arms deals and the funding/support of terrorist organizations that the US claimed to be fighting against. This is a great example of how the global elite funds and creates a problem in order to justify a desired outcome (in this case it was heightened national security measures back home to protect people from ‘the war on terror’ and justify their infiltration of another country for ulterior motives).
I could go deeper into this, but the bottom line is that the arrest of Julian Assange comes at the hands of the criminals around the globe he was exposing, and it’s ironic that they are using their power and influence over mainstream media to portray Assange as the one who needs to be put behind bars.


The Latest Update On Assange

Below is the latest update from the Wikileaks team via a recent press release.
Three weeks before the U.S. deadline to file its final extradition request for Assange, Ecuadorian officials are travelling to London to allow U.S. prosecutors to help themselves to Assange’s belongings.
Neither Julian Assange nor U.N. officials have been permitted to be present when Ecuadorian officials arrive to Ecuador’s embassy in London on Monday morning.
The chain of custody has already been broken. Assange’s lawyers will not be present at the illegal seizure of his property, which has been “requested by the authorities of the United States of America.”
The material includes two of his manuscripts as well as his legal papers, medical records and electronic equipment. The seizure of his belongings violates laws that protect medical and legal confidentiality and press protections.


The seizure is formally listed as “International Assistance in Criminal matters 376-2018-WTT requested by the authorities of the United States of America.” The reference number of the legal papers indicates that Ecuador’s formal cooperation with the United States was initiated in 2018.
Since the day of his arrest on April 11, 2019, Mr. Assange’s lawyers and the Australian consul made dozens of documented demands to the embassy of Ecuador for the release and return of his belongings, to which they received no response.
Earlier this week the UN Special Rapporteur on Privacy, who met with Mr. Assange in Belmarsh prison on April 25, asked to be present to monitor Ecuador’s seizure of Assange’s property. Ecuador inexplicably refused the request, despite the fact that since 2003, Ecuador has explicitly committed itself to granting unimpeded open invitations for UN special rapporteurs to investigate any aspect of their mandate in Ecuadorian jurisdiction.
The seizure and transfer of Mr. Assange’s property to the U.S. is the second phase of a bilateral cooperation that in January and February saw Ecuador arranging U.S. interrogations of past and present Ecuadorian diplomats posted to the embassy of Ecuador in London while Mr. Assange was receiving asylum. The questioning related to the U.S. grand jury investigation against Assange and WikiLeaks. As part of phase one of the cooperation, the United States also asked Ecuador to provide documents and audiovisual material of Assange and his guests, which had been gathered during an extensive spy operation against Assange inside the embassy.
Report this ad
On Friday, President Lenin Moreno initiated a state of emergency that suspends the rights of prisoners to “inviolability of correspondence, freedom of association and assembly and freedom of information” through Executive Decree 741.
Kristinn Hrafnsson, Editor-in-Chief of WikiLeaks said:

“On Monday Ecuador will perform a puppet show at the Embassy of Ecuador in London for their masters in Washington, just in time to expand their extradition case before the U.K. deadline on 14 June. The Trump Administration is inducing its allies to behave like it’s the Wild West.”

“Ecuador is run by criminals and liars. There is no doubt in my mind that Ecuador, either independently or at the behest of the US, has tampered with the belongings it will send to the United States.”

“It is extremely worrying that Ecuador has proceeded with the search and seizure of property, documents, information and other material belonging to the defence of Julian Assange, which Ecuador arbitrarily confiscated, so that these can be handed over to the agent of political persecution against him, the United States. It is an unprecedented attack on the rights of the defence, freedom of expression and access to information exposing massive human rights abuses and corruption. We call on international protection institutions to intervene to put a stop to this persecution.”

Lawyer for Mr. Assange, Aitor Martinez, whose confidential legal papers were photographed with a mobile phone by embassy workers as part of a spy operation against Mr. Assange in October 2018, said:

“Ecuador is committing a flagrant violation of the most basic norms of the institution of asylum by handing over all the asylee’s personal belongings indiscriminately to the country that he was being protected from–the United States. This is completely unprecedented in the history of asylum. The protecting country cannot cooperate with the agent of persecution against the person to whom it was providing protection.
Ecuador has now also refused a request by the UN Special Rapporteur on Privacy, Joe Cannataci, to  monitor and  inspect the cooperation measure. Ecuador’s refusal to cooperate with the UN Special Rapporteur defies the entire international human rights protection system of the United Nations. Ecuador will from now on be seen as a country that operates outside of the system of safeguards of rights that defines democratic countries.”

“In the face of countless abuses, and acting on provisions in domestic legislation and international human rights instruments, the defence has challenged the execution of this measure. All applications have been rejected. While the prosecution office proclaims its commitment to human rights protections, there has been no transparency and the investigation is conducted in secret. Without justification, and absent of all legal criteria, the measure shows the interest in obtaining information that the United States can use to proceed with its flagrant persecution. Meanwhile Ecuador has hinted that it too intends to proceed with investigations. Meanwhile, to date our criminal complaints of espionage against Julian Assange remain unprocessed, despite the gravity of the facts reported.”