OUT OF MIND » CHANGING ENVIRONMENT & NATURE » EARTH CHANGES » Yukon Indian Chief: Everything is changing right in front of our eyes

Yukon Indian Chief: Everything is changing right in front of our eyes


Officials in the Yukon’s most northern community have declared a state of emergency, saying the traditional way of life in Old Crow is under threat. “It’s going to be the blink of an eye before my great grandchild is living in a completely different territory, and if that’s not an emergency, I don’t know what is,” said Dana Tizya-Tramm, chief of the Vuntut Gwitchin First Nation, after a ceremony marking the state of emergency May 19. “We are seeing birds up in our community we have never seen before. Their migrations are changing, the snow is changing, the rivers are changing. Everything is changing right in front of our eyes.“
ADVERTISING
Lorraine Netro, a member of the Vuntut Gwitchin First Nation and an environmental advocate, said she’s scared about what could happen if people don’t start working now to reverse the effects of climate change.
“We’re spiritually connected to our land, to our water and to our animals, and it’s our sole responsibility to make sure we do everything in our power to take care of the land and water for future generations,” she said. 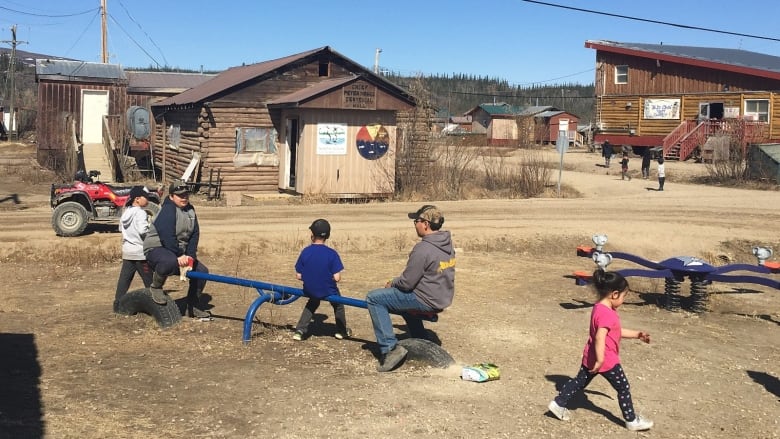 Children play in Old Crow, Yukon, May 19. The Vuntut Gwitchin First Nation has declared a state of emergency over climate change. (Heather Avery/CBC)
Tizya-Tramm said the declaration does not come with a request for funding. Instead, he hopes it creates a pathway for other Indigenous communities to follow.
“And from here we hope to create an Indigenous climate accord, whether it be pan-Arctic or right across the Arctic circle, but it should start with the Arctic,” he said.
Tizya-Tramm is working closely with Kluane Ademek, the Yukon regional chief for the Assembly of First Nations, to bring other Yukon First Nations on board.

Next month, delegates from the Vuntut Gwitchin will take their declaration “six hours downriver” to Fort Yukon, Alaska, Tizya-Tramm said.
That’s where the Gwich’in Steering Committee is holding the Arctic Indigenous Climate Summit. Gwich’in delegates from communities across the North will travel there to share their concerns about climate change, the welfare of the Porcupine caribou herd and food security.
I don’t know if it is climate change… But there is really something to do to reverse our weather chaos! What is currently going on right now is insane. Soon, the degradation of the natural world is going to be humanity’s existential crisis.

OUT OF MIND » CHANGING ENVIRONMENT & NATURE » EARTH CHANGES » Yukon Indian Chief: Everything is changing right in front of our eyes