Unvaccinated Population Called Upon to Participate in Vaccinated versus Unvaccinated Legal Study Sat May 25, 2019 12:31 pm 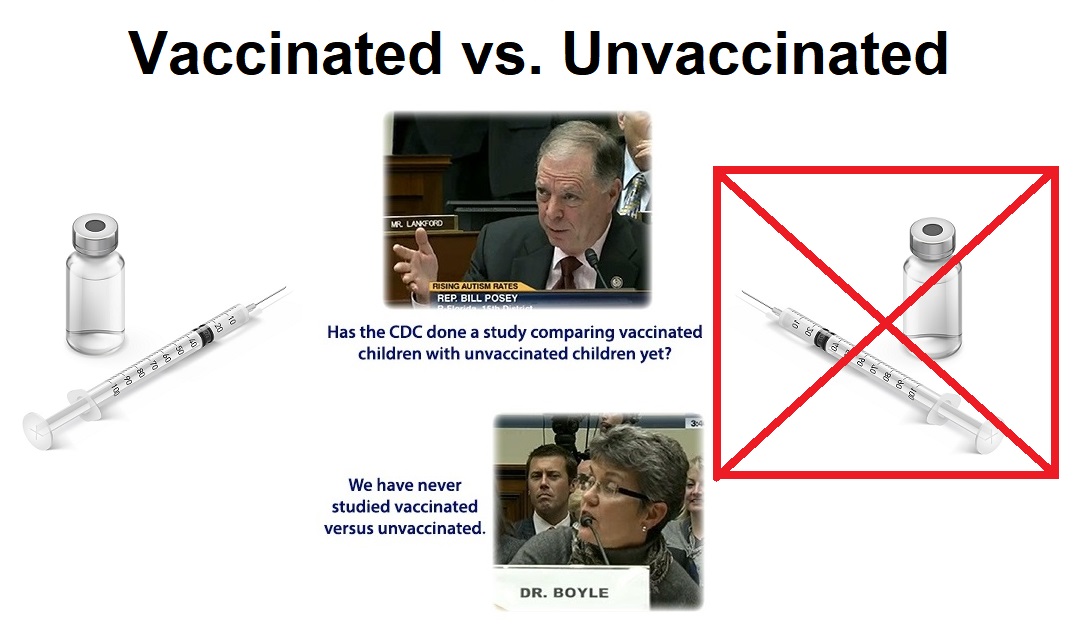 Images of Congressman Posey and Dr. Coleen Boyle of the CDC are from the Congressional Autism hearings in 2011.
Health Impact News
by Joy Garner
thecontrolgroup.org

Hello, my name is Joy Garner. I am the founder of The Control Group, thecontrolgroup.org.
We are now conducting the largest-ever epidemiological health study of unvaccinated people in preparation for a federal lawsuit to end all vaccine mandates Nationwide.
We are NOT asking for money. We need ACTION.
Even a few minutes of time WILL make a huge difference.
Over 43% of VACCINATED children in the USA are now suffering chronic, disabling, and even deadly diseases. Our early study responses are already proving that UNvaccinated kids have almost ZERO chronic health problems AND they are far LESS susceptible to serious INFECTIOUS diseases, particularly if they did not receive an aluminum-filled vitamin K shot at birth.
As this large % of vaccine injured kids reach the ages where they would otherwise have been entering the workforce, our Nation’s economy will COLLAPSE.
Many of these children require life-long 24 hour care. This is a NATIONAL EMERGENCY.
The vaccine programs represent an imminent and existential threat to the survival of our Nation. Our study is already definitely proving what the CAUSE of all this disease and destruction is.
We are targeting August 15th, 2019 for completion of this study and then we are headed into federal court. The primary pharma “legal argument” to defend vaccine mandates, which the US Supreme Court has repeatedly upheld, is that individual rights can be violated in the name of “public health”.
However, our study already proves vaccines are DESTROYING “public health”, also causing more serious INFECTIOUS diseases.
According to the Federal Judge’s Bench Guide, true CONTROL studies are the GOLD STANDARD of evidence for proving CAUSATION, requiring it to be given the most “weight”.
Previous comparative studies (vaccinated vs. unvaccinated) have been too small, and dismissed as “statistically insignificant”.
But with the size of this study, we CAN win this, especially with Trump’s judicial appointments on board now. Our massive and now expanding study will be the most damning evidence big pharma has ever faced in a court of law.
Please consider having a spokesperson from The Control Group write an article for your publications, and/or please help spread the word about the study.
The larger our study, the more responses we get back, the more profound the evidence that vaccines are in fact the primary CAUSE of our Nation’s rapidly declining health.
The vaccine programs represent the single worst public health threat, (and economic threat) this Nation has ever seen. The vaccine programs are poised to wipe out our economy in the not-too-distant future as a result of the epidemic of devastating illnesses they are causing.
We are also preparing a report on this fact to submit to the NSA and the White House. Robert Kennedy Jr, and other good people will be able to make good use of this evidence in their own continuing legal efforts.
Please call me personally at 530-210-1001 to learn more, and to find our how you can help in this effort, and/or if there is anything we can do to help in your efforts.
Again, we are NOT asking for money. We are building our case right now, and we are self-funding the legal battles ahead.
UNvaccinated people are the EVIDENCE big pharma is desperately trying to eliminate with their vaccine mandates, SO THAT the cause can never been fully proven. We MUST collect as much evidence as possible while we still can.
Once they criminalize unvaccinated people, everyone will go into hiding and we will not be ABLE to collect this data, not even with “anonymous” participants.
Our surveys CAN currently be completed anonymously. We already have plenty of “sample” witnesses who are looking forward to testifying about the good health of their unvaccinated children.
But this matter is URGENT. If we wait, NOBODY will be willing to testify or even be willing to fill out an anonymous health survey, for fear of potential prosecution.
This level of medical tyranny is already being beta-tested in New York, and it includes ADULTS in the mandates, also specifically targeting and publicly demonizing unvaccinated Jews.
If we do not put a stop to it now, our opportunity to end this madness will expire, along with our Nation.
PLEASE help us spread the word about the health survey. We must document all of this NOW before we are fully “check-mated” by pharma in this battle.
They have already drafted the laws that will mandate vaccines for ALL Americans, every man, woman, and child, under threat of criminal prosecution. They have already bribed their politicians who WILL vote yes on this destructive tyranny.
Big tech is massively clamping down on our efforts to raise awareness online, and protests only result in MORE bad laws passing, as the crooked politicians entirely ignore our cries.
We are running out of time. PLEASE call me and HELP save this Nation.
God bless you all for the work you do. And GOD BLESS AMERICA! Joy Garner, founder of The Control Group thecontrolgroup.org

Joy’s response to some questions/criticisms:

The Control Group is going to WIN this and stop the vaccine mandates!
If you’re doubting, that’s fine. We are more than happy to learn what your plan of ACTION is, and consider it. If it looks like a solution, we’ll help you out with it. But it needs to be a plan of ACTION, and it needs to be HAPPENING SOON.
We’re at that point where we’re starting to say “Lead, follow, or get out of the way”. Sitting around telling everyone who IS doing something, that it’s not good enough for your taste, isn’t cutting it anymore.
Disparaging people who are ACTUALLY DOING SOMETHING doesn’t look like a great battle plan to me. And a battle this is.
If you are unaware of what is at stake, you need to find out. If you don’t have a serious plan of action of your own handy, pitch in wherever you can and stop whining. Nobody cares about that stuff anymore. We need ACTION.
I see some people think the survey’s not “scientific” enough. But the real point here is: According to WHO’s definition of “science” do you claim this? If you’re looking for The Control Group to fall in lock-step with the sort of “science” pharma has to offer you, we’re not you’re huckleberry.
READ ON, if you DARE;-)
“Scientific”? This is a general product safety survey. It is NOT being conducted for publication in a pharma-funded medical journal.
It IS being conducted based upon the Federal Rules of Evidence for submission under a particular branch of law. The Federal Courts do NOT require us to get the blessings of big pharma before it becomes admissible as evidence.
It is possible that the results could be skewed by some people, but this happens with ALL surveys, and we already have so many participants willing to identify themselves, (and even testify in court) that we will be able to show these affects are only minimal in our study.
Also, we are using PAPER hard-copy documents, and those are REALLY tough to fake.
Unlike the CHEAP and fraudulent online “epidemiological” studies the FDA conducts on their website, (which can ALL be rigged electronically) our survey can’t be “hacked”.
But the FDA routinely calls these online surveys “verified” as their evidence to “scientifically prove” that little 8 year-old Johnny probably contracted arthritis (two weeks after his shots) because he’s confused about his gender, or he lives in a bad neighborhood.
Anything BUT the shots will be blamed for the recent epidemic of childhood arthritis, and myriad other problems.
With OUR study, the defendants will have the opportunity to examine the documents and argue for exclusion of any that appear to be faked, duplicates, etc. We won’t have a problem with this, because the great majority of them will be impossible to refute.
As to it being requirement to show everyone’s “medical records” along with the survey, this is ONLY required if we are suing for liability, and even then, the only records required, are the ones from the actual plaintiff, litigant/injured party.
We are NOT going in on a liability claim. Those get summarily dismissed because pharma has complete immunity for the damage vaccines cause.
Surveys that are conducted in a similar manner to ours, (but far less reliable) are conducted to support a plaintiff’s contention that the suspected product was the likely cause. It’s admissible. Plain and simple. We only need to meet a “preponderance” standard for what we are pursuing. This isn’t a death penalty case. It’s a civil matter.
When the government sues in Federal court to get an injunction against the sale of a particular product, they are able to obtain injunctions using far LESS reliable survey methods than what we are doing. They often submit survey evidence that’s done ONLINE and it’s perfectly admissible. We are going the extra mile with the paper.
It seems many otherwise logical minds are set in the trap of pharma-funded “science” definitions and dictates.
Trust pharma if you like, but not everyone does anymore, and for good reason. Thankfully Pharma’s irrational definition of science does not rule over our Federal Courts, and their “methodology” is not the same as what constitutes EVIDENCE in court.
Whereas pharma-funded vaccine “science” is clearly illogical and obviously engineered to HIDE the truth about vaccines, courts don’t operate this way. Unlike pharma science, Courts and the rules that govern them, are generally engineered to arrive at the TRUTH of a matter.
Pharma is not able to force the courts to start applying special new rules, where real science, (facts, data, hard evidence, logic and reason) are ALL summarily disposed of and even scandalized as too “old fashioned”.
Go READ the Federal Judge’s Bench Guides. PLEASE read something OTHER THAN the irrational “logic” of the big pharma cover-up machine. 95% of the funding for medical journals comes directly from big pharma.
We all need to get a clue here. Get out of THEIR little control box. You may die there if you don’t escape. These mandates are their “final solution” – for the dreaded measles?;-)
Godspeed,
Joy Garner, founder of The Control Group
Comments originally published on Facebook.