US flooding crisis - When the Levee Breaks

Two new levee breaches along the swollen Arkansas and Mississippi rivers have prompted evacuations in Dardanelle, Arkansas, and Quincy, Missouri. 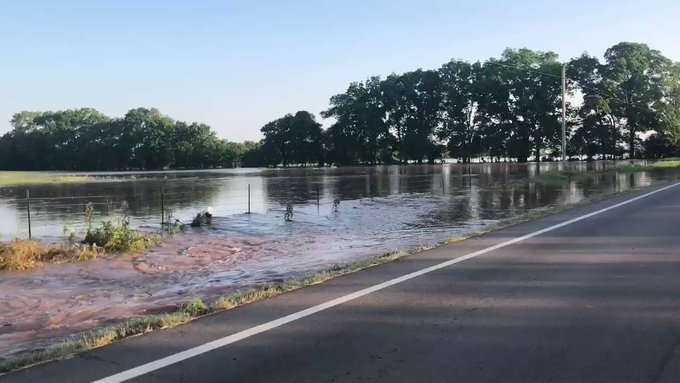 “Emergency management reported flooding along the Durgens Creek in Lewis County. Water is expected to flow south into West Quincy. Move to higher ground now. Act quickly to protect your life,” the National Weather Service office in St. Louis said in a flash flood warning that was issued for the area.


Even as the Arkansas River slowly begins to recede in some areas after record-levels, officials say flooding will not be over anytime soon.

Nathan Spicer, emergency management specialist in Little Rock — where the river is expected to crest at 28 feet on Monday — told the city board the rain will prolong the flood’s effects.

“This flood event could last for two, three weeks, maybe a month,” Spicer said, according to a report by the Arkansas Democrat Gazette.

The Arkansas River is expected to crest Friday near Fort Smith, Arkansas, at 40.8 feet, well above the previous record of 38.1 feet there but less than the 42.5 feet that had been expected.

“It will be over 40 feet for several days,” Michael Biggs, chief of the hydraulics and technical services branch for the Little Rock District of the U.S. Army Corps of Engineers, told the Democrat Gazette. “That’s better than 42.5 feet.“

Flooding across the region has forced Amtrak to suspend service between St. Louis and Fort Worth, Texas, until June 7.

In neighboring Oklahoma, more than 2,400 people have been evacuated and more than 1,000 homes have been flooded by this long-lasting event.
Officials announced Thursday the U.S. Army Corps of Engineers will gradually decrease the outflow of water from Keystone Dam through Monday, which should alleviate some flooding, the Tulsa World reported.


Authorities in the Tulsa region continue to warn people drawn to the river out of curiosity to stay away.

“What it’s going to cause and what it has caused is the attempt to rescue somebody. We’re going to have a first responder put their lives in harm’s way to save you because you chose not to listen to a very simple warning and put your life at risk,” Sgt. Shane Tuell with Tulsa police told KTUL.

Tuell noted that even if “the water” or a “sinkhole doesn’t get you,” the water is unsanitary and could cause illness. “There are snakes that have been displaced and are not very happy,” Tuell added.

Meanwhile, according to a new annual report, 7.3 million homes at risk of hurricane storm surge on the US East Coast. Get prepared and be ready for this new burst of extreme weather.