A few weeks ago, I was writing about the huge piles of garbage that are inundating streets with rats and disease in downtown Los Angeles. 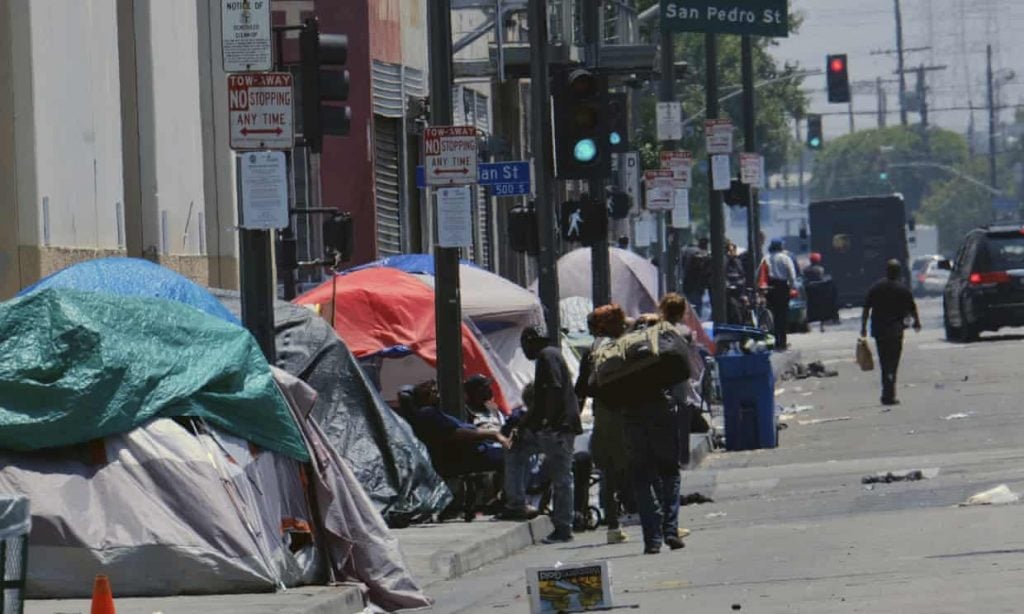 The county “point-in-time count”, conducted by thousands of volunteers in January each year, is an estimate of the number of people living on the street, in tents, in cars and in shelters. The sharp increases paint a picture of a growing public health crisis in a region home to some of the richest neighborhoods and people in the US.
ADVERTISING

Some key data from the report

The LA mayor, Eric Garcetti, called the increase “heartbreaking” in a statement. “These results remind us of a difficult truth: skyrocketing rents statewide and federal disinvestment in affordable housing, combined with an epidemic of untreated trauma and mental illness, is pushing people into homelessness faster than they can be lifted out,” he said.

The report found that 53% of people suffering homelessness for the first time cited “economic hardship” as a leading factor, and that roughly one-quarter of the unsheltered adults lost their housing in 2018. A majority of the homeless people have also lived in the county for more than 10 years.
“I’ve been crying out that this is a disaster of epic proportions,” said the Rev Andy Bales, CEO of Union Rescue Mission, an LA homeless organization. “Thousands upon thousands are suffering in the streets … and the longer you leave people on the streets, the more devastating it is.”

The crisis has disproportionately hit black Americans, who are four times more likely to experience homelessness in LA than other groups; they represent 33% of the homeless population despite representing only 8% of the county population.
Officials in LA county, which spent $619m on the crisis last year, said they had made progress in 2018, placing more than 21,000 people in homes, an increase of 23% from the previous year.

The Los Angeles Homeless Services Authority (Lahsa) also noted that the exorbitant rent increases in the area combined with stagnant wages means one-third of households now spend more than 50% of income on rent. One recent study named LA the least-affordable housing market in the country.
An LA renter earning minimum wage would need to work 79 hours a week to afford a one-bedroom apartment, and the county would need more than 500,000 new affordable units to meet the needs of low-income renters.

“The pressures on Angelenos are severe,” Peter Lynn, Lahsa executive director, said at a public meeting unveiling the numbers, adding that the government “can help thousands of people exit homelessness, even as thousands more fall into homeless”.
Bales said his own employees could not afford to live in LA and that the crisis was “past the tipping point”, adding: “I hope this is the wake-up call.”

The data was released days after the Wall Street Journal reported that developers in LA have built a surplus of lavish mansions in posh LA neighborhoods – with price tags in the tens and hundreds of millions.
“The unaffordability in this city is sending more and more people on to the streets,” said Tracy Jeanne Rosenthal, co-founder of the LA Tenants Union. “What is going on is out of control rent-gouging, real estate speculation, the destruction of rent-controlled housing, and the overdevelopment of luxury [housing],” she added.

Rosenthal said she was tired of seeing the homeless criminalized and harassed by police, and that public housing and expanded rent control policies were critical to allowing people to stay in their homes and in LA.
Once people are evicted or pushed out due to huge rent hikes, they often have no other options for housing, she added: “If you’re evicted in Los Angeles, you’re evicted from Los Angeles. If you want to remain housed, you have to leave the city completely.”
And so garbage piles will continue to spread across Los Angeles.
[Lahsa, The Guardian]