UPDATE - Was the Mysterious light spotted over Beijing China a Missile?

A MYSTERIOUS moving light has been spotted in the sky above multiple cities in China, fuelling speculation that Beijing is secretly testing a new nuclear missile.
The unidentified sighting was said to have occurred about 4.28am on Sunday and was witnessed by residents across eastern and central parts of China. 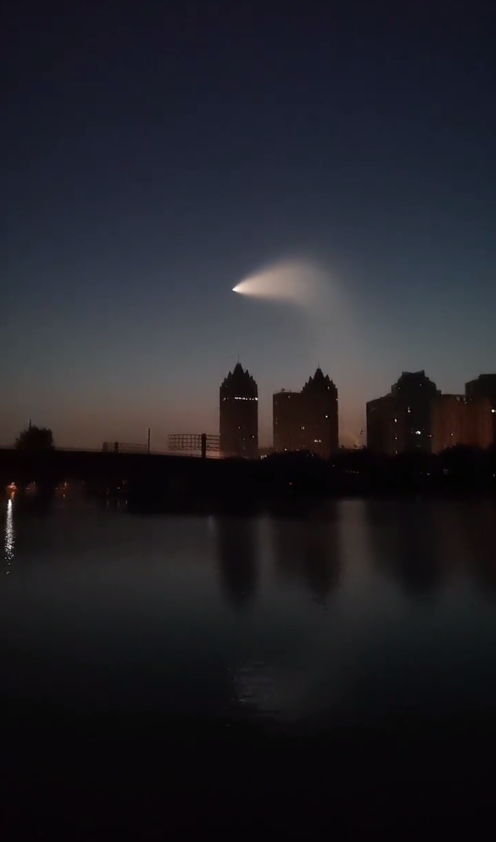 2
A mysterious light was seen moving quickly across the sky in ChinaCredit: weibo
A video was later uploaded to the Chinese social media platform Weibo, showing the object flying above city skyscrapers said be in Zhengzhou in central China.
The People's Liberation Army Rocket Force - which typically does not announce new missile tests - also uploaded a cryptic post to their official Weibo account.
The post contained a picture of what looked like a road mobile intercontinental ballistic missile launcher against a night sky.
"Do you believe in this world there are UFOs?"the caption read, without offering further explanation.
State-owned Global Times newspaper reported that “residents across multiple provinces in China” had seen “an unidentified flying object with a glowing fiery tail streak across the sky”.
The object which appears to have a massive 'tail', slowly fades and disappears after less than a minute.
Chinese news outlet Sina reported:"Therefore [we] judged: [it was] an experiment of a new type of submarine strategic missile shot from nuclear submarine such as 094B or 096 under Bohai Sea...
"... In addition, [it was] a new JL-2B or JL-3 missile carrying a hypersonic warhead.
"The combination of the two technologies means that China is the first to deploy hypersonic missiles on nuclear submarines."
The website also noted that a notice posted by the Maritime Safety Administration of Liaoning Province warned ships not to pass Bohai Sea and Bohai Strait to make room for 'a military mission'.

This is a test of China's installation of a hypersonic warhead on the Submarine Jets-3 missile."
Sina News

The navigational coordinates were said to be connected to sites of military missions.
"It was during this time that so-called UFOs appeared in the provinces from Bohai Bay to Xinjiang," the publication added.
"The movement of this illuminant is not as fast as that of traditional missiles, and it shows a high-altitude manoeuvring posture, which is very similar to the hypersonic weapon that China has tested before."
The area in which the object was seen would be consistent with a missile fired from the Bohai Sea following a flight path into the desert areas of western China where ballistic missile test firings usually impact.

Defence journal Janes reported the object was likely to be related to a classified military test of Julang-3 (or JL-3), a submarine-launched nuclear missile equipped with a hypersonic weapon warhead alleged to be capable of reaching North America.
The integration of the two technologies could mean that China would be the first to deploy hypersonic missiles on submarines.
Zhao Haibin, a researcher at the Nanjing Purple Mountain Observatory, said the sighting was unlikely to be a natural celestial body.
The researcher said it was likely to have been shot up from the ground.
In the video, one person can be heard saying "wow, what is this?" before another voice added "[it] looks like something flown up from the ground".

The suspected experiment may be a response to Washington amid an intensifying trade war and after the US recently tested an intercontinental ballistic missile last month.
The development of JL-3 has been gathering attention as reports claim it is capable of carrying 24 missiles and would have a full operational range between 7,456 miles and 8,700 miles.
This would be enough to destroy targets in most part of the United States from Chinese coasts.
In April, images of the impressive Jia Geng No 1 rocket emerged on Chinese media sites.
The pictures are said to show a prototype missile measuring 8.7 meters (28.5 feet) from tip to tail and weighing in at nearly four tonnes.
It appears equipped with supersonic combustion ramjets - or scramjets - which suck in air at supersonic speeds leading to a much higher velocity. 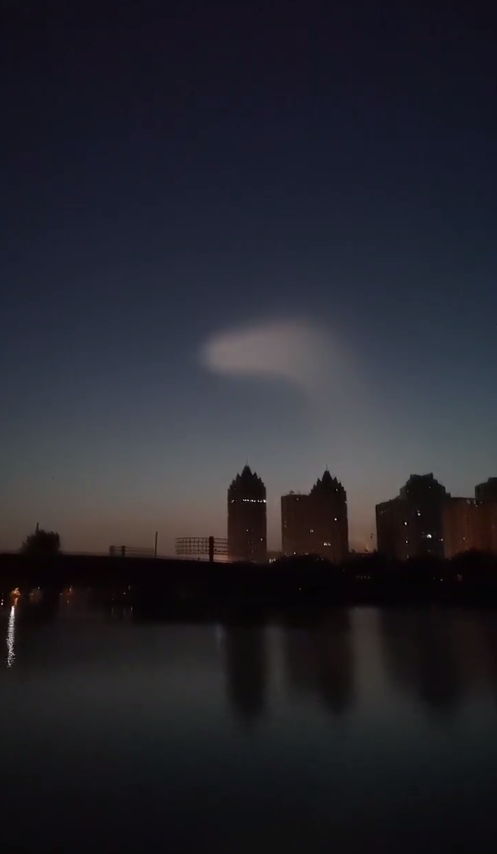 2
One researcher said the sighting was unlikely to be a natural celestial bodyCredit: Weibo