OUT OF MIND » CHANGING ENVIRONMENT & NATURE » EARTH CHANGES » Three islands disappeared in the past year. Is climate change to blame?

Three islands disappeared in the past year. Is climate change to blame?


The same forces that sunk the remote islands could put
coastlines around the world at risk, scientists say.
https://www.nbcnews.com/mach/science/three-islands-disappeared-past-year-climate-change-blame-ncna1015316
June 9, 2019
By Denise Chow 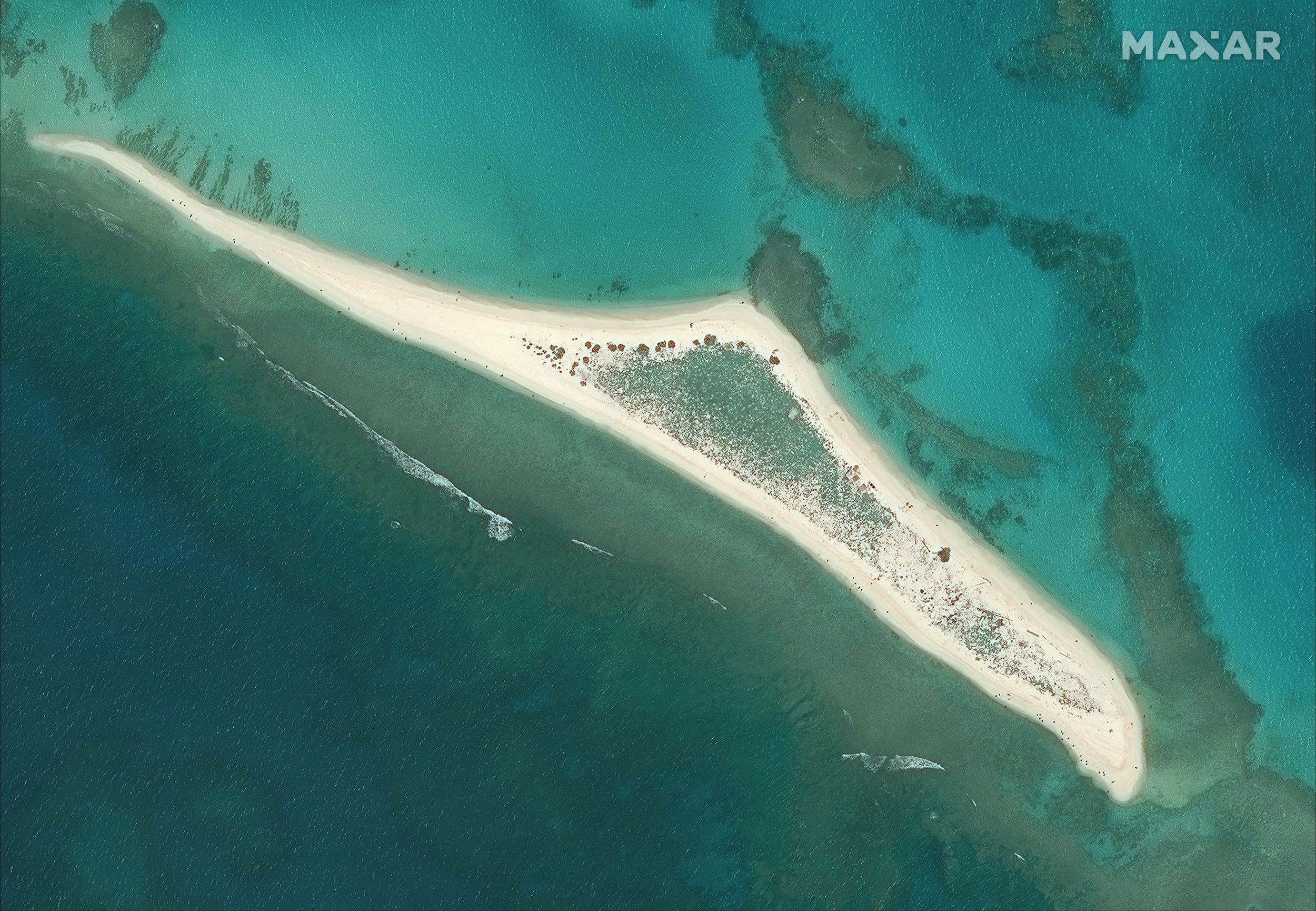 Anote Tong can remember when Tebunginako, on the central Pacific island nation of Kiribati, was a thriving village.
But beginning in the 1970s, the tide started inching closer to the houses in the village. Over the years, as strong winds whipped up monster waves and climate change caused sea levels to rise, water inundated the island, overwhelming a seawall that had been built to protect the community.
Barely anything remains of the village today.
“It’s no longer there,” Tong said. “What we do have is a church sitting in the middle of the sea when the tide comes in.”


Villagers on the island of Abaiang had to relocate their village, Tebunginako, because of rising seas and erosion. (Justin Mcmanus/The AGE/Fairfax Media via Getty Images)
Tong served as president of Kiribati, a country made up of 32 atolls, from 2003 to 2016. Over that time, he watched as erosion damaged food crops, seawater flooded freshwater ponds and residents were forced to retreat.
He has become outspoken in describing the “existential threat from climate change” his country faces.
“In the near future, communities may have to relocate,” he said. “When it hits you directly, it’s very difficult for you to deny it.”
Tong has good reason to be worried. As human activities continue to alter the environment, islands are increasingly vulnerable to the impacts of the planet’s changing climate. 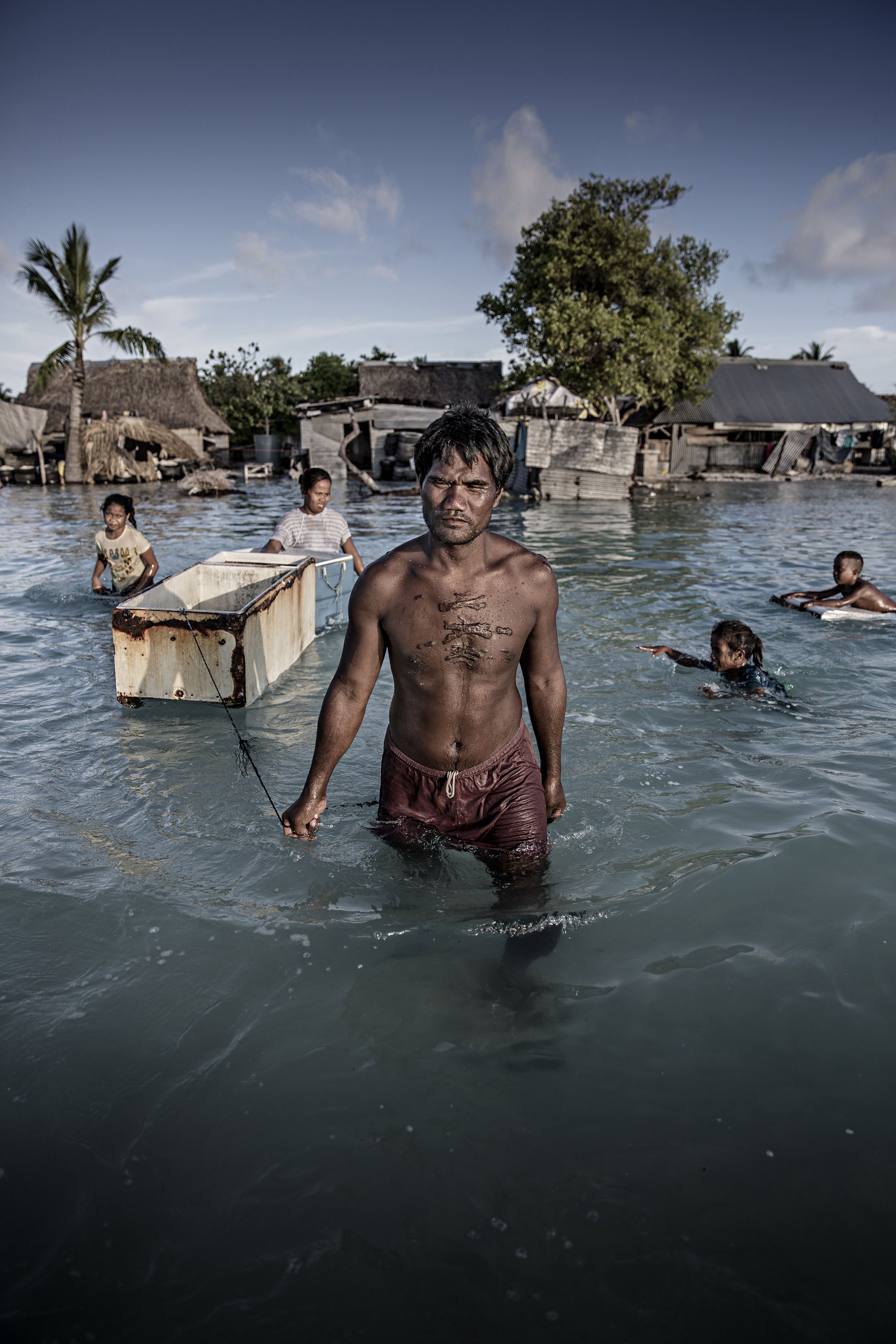 A family wades through their flooded village, floating an old fridge, collecting sea-bed stones to build a flood wall in Eita, Tarawa, Kiribati. (Jonas Gratzer/LightRocket via Getty Images)
In October 2018, Hurricane Walaka washed away a remote, 11-acre Hawaiian island as the storm barreled through the Pacific Ocean. Several months before that, Russian scientists reported that a small Arctic island had disappeared, saying that only vast, open water remained at the site. And near the end of 2018, a local newspaper reported that an uninhabited islet off the coast of Japan could no longer be found, presumably because it had sunk beneath the water’s surface.
In these recent examples, the islands were small and uninhabited, but scientists say the fate of these tiny pieces of land could be a harbinger of what’s to come.
“With some of these small islands, maybe it’s no big deal to the average person because they’re uninhabited, but you’re going to see these same processes happen on larger islands and populated ones,” said Curt Storlazzi, a geologist at the U.S. Geological Survey’s Pacific Coastal and Marine Science Center in Santa Cruz, California.
Storlazzi has conducted research on coastal erosion in the tropics. He says that one way rising sea levels can redesign coastlines is by generating bigger waves, adding layers of sediment in some places while causing erosion and flooding in other areas.
“If sea levels continue to rise as projected,” Storlazzi said, “there’s going to be even greater change.

The threat of rising seas
The link between climate change and sea level rise is well understood among scientists. Burning fossil fuels emits carbon dioxide, a greenhouse gas that traps heat in the atmosphere. As global surface temperatures increase, the planet’s glaciers and ice sheets melt, raising sea levels.
In 2013, the United Nations released a sweeping report projecting that without major reductions in emissions, sea levels could rise between 1.5 feet and 3 feet by 2100.
Since the report’s release, some scientists have suggested that these estimates are too conservative. Among them is Patrick Nunn, a professor of geography at the University of the Sunshine Coast in Queensland, Australia, who was one of the authors of the chapter on sea level rise in the U.N. assessment.
Nunn said most scientists now agree that even if countries took steps today to reduce greenhouse gas emissions, average sea levels would still rise by up to 6.5 feet by the end of the century.
“What we’ve done thus far, as of the last 150 years or so, has been locked in,” Nunn said. “There is a bit of uncertainty, but the general consensus is that we can get temperatures under control but it’s a much larger challenge to get sea level rise under control.”
Even without sinking whole islands, that amount of sea level rise is enough to engulf most coastlines, potentially displacing millions of people.
“On many islands — even ones that aren’t low-lying — the majority of critical infrastructure is right at the shoreline, whether it’s ports, airports, primary roads, power plants or water treatment plants,” Storlazzi said. “Most of these things are very close to the coast.”
Extreme weather’s ‘knockout blow’
Another force reshaping islands is extreme weather. That’s what happened in Hawaii, when the category 5 Hurricane Walaka wiped out tiny, uninhabited East Island.
Studies have shown that climate change could make storms more intense, particularly in the Caribbean and the western Pacific. Catastrophic storms could disrupt the natural processes that erode coastlines and move sediments to build them back up again.
“In a situation where the climate is not changing and sea levels are not rising, what has normally happened is these islands would eventually re-form after the storm passes,” Nunn said. “In a changing climate, particularly one where the sea level is rising, I think intense storms of that kind will be a bigger knockout blow.”
Satellite photos taken last month show that a narrow swath of East Island appears to be re-forming, with seals returning to its beaches. But Nunn said that even if some islands do return, it’s unclear whether they will grow back to their original size.

Pacific islands under siege
Even with ample evidence of how the planet’s climate has changed since the Industrial Revolution, many scientists are cautious about drawing direct links between disappearing islands and climate change. The Earth is complex, and many things are working in tandem to reshape coastal landscapes.
“You’re probably never going to be able to prove definitively that climate change was responsible for a particular phenomenon,” Nunn said, “but at the same time, the evidence is just so overwhelming.”
Nunn has spent more than 30 years studying countries in the western and South Pacific, including Micronesia and the Solomon Islands, where sea levels are rising the fastest. Whereas seas are rising an average of 3.2 millimeters per year globally, parts of the western Pacific are seeing an average jump of 8 to 12 millimeters per year, driven by wind patterns that are moving more water to the region.
That makes islands in this part of the world especially vulnerable.
“For now, sea levels are rising along every coast and in some places, it’s rising much faster,” Nunn said.
Paul Kench, a coastal geomorphologist at Simon Fraser University in British Columbia, Canada,  and his colleagues have surveyed thousands of islands in the Pacific. While islands have always been at the whim of the waters that surround them, they found that erosion is accelerating as a result of rising seas and intensifying storms. And though larger islands are more stable than smaller ones, they, too, will likely experience dramatic changes, he said.
“There is no doubt that climate change is having an influence on the rate at which some of these islands are changing,” Kench said.
‘A window into the future’
Current rates of sea level rise are expected to continue for at least 100 years, so scientists project that coastlines will continue to be bombarded for generations to come. And it likely won’t be just small, uninhabited islands that face an existential threat.
Scientists say the islands that disappeared in Hawaii, Japan and the Arctic are warnings of what could happen to much larger islands — and even continental coastlines around the world.
“This gives us a window into the future,” Nunn, of the University of the Sunshine Coast, said. “It tells us this is what’s likely to happen in the next 20 years or so, and not just in the island context.”
He says governments should pay attention to the islands in the western Pacific and make their own coastal communities more resilient. This includes fortifying critical infrastructure near the coasts and being smart about rebuilding after storms, including not erecting new structures in known flood zones.
“The evidence is there. We can see what’s going to happen,” Nunn said. “What’s happening to these islands is the same thing that is going to happen to New Orleans, Los Angeles and all sorts of coastal cities. The sooner we start thinking about this, the less painful it’s going to be.”

OUT OF MIND » CHANGING ENVIRONMENT & NATURE » EARTH CHANGES » Three islands disappeared in the past year. Is climate change to blame?

» Deep Sea Volcanos Replace “Consumers” as Blame For Global Warming/Climate Change
» Hanoi Jane Says Racism To Blame For ‘Climate Crisis
» Jay Parker: "800,000 Kids Disappeared Every Year By Satanic Illuminati Paedophiles!"
» A tree petrified for 10 million years tells another story of the past climate
» David Icke - Climate Change Isn't What You Think It Is