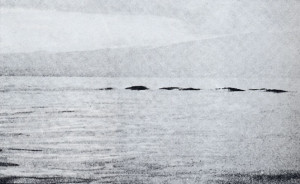 WATCH: Another new video has re-kindled the age-old debate about B.C.'s legendary lake creature. An Okanagan man says he has hard evidence that Okanagan lake's "Ogopogo" is more than just a myth. A south Okanagan man is convinced he’s captured the most conclusive piece of evidence yet of the legendary and elusive lake monster in the Okanagan known as the Ogopogo. Jim La Rocque was enjoying his mother-in-law’s lakefront property with his two children in Kaleden, B.C. on June 1 when he says he noticed an inexplicable wake on Skaha Lake. La Rocque scrambled to record the mysterious ripples breaking through the lake’s glassy surface. His son was wading on a paddle board nearby. “Eventually he turns and sees a flipper come out of the water and hit the water, and that’s when he… turned around and started coming back in,” La Rocque said. The longtime Okanagan resident said he couldn’t believe his eyes. La Rocque believes he witnessed a giant, serpentine creature swimming across the lake with at least seven fins paddling in sync. He estimates it was at least 36 metres (120 feet) long. “I’d describe it as like a dragon boat race, like with oars, so if you flipped the dragon boat upside down, you would see all those oars coming out of the water,” he said. La Rocque owns the Fairview Liquor Store in Penticton, B.C., and curious customers have been stopping by to get a glimpse of the cellphone video for themselves. “I don’t know what it could be. That’s pretty weird, it’s not like normal waves,” customer Jesse Deuschle said. “At first I was thinking maybe just waves, but there is obviously something more there,” liquor store employee Jack Holman said. Tales of the snake-like creature — similar to Scotland’s Loch Ness Monster — have been making waves in the Okanagan for the past century. According to Bill Steciuk, who runs a website documenting Ogopogo sightings, the legend dates back as early as the 1700s, when First Nations knew of a water beast in Lake Okanagan. The Kelowna retiree, who has dedicated his life to proving the creature’s existence after his own encounter in 1978, is skeptical of La Rocque’s alleged sighting. Video Credit-Global News Source-Jim La Rocque Don't forget to like and subscribe for more uploads, It's an invasion, trust! Like the brand new face book page https://www.facebook.com/Disclosescreen/ Send in your UFO sightings/evidence for me to examine and maybe show on my channel evans.nelly@yahoo.com All my thoughts and insights are pure speculation on the subject at hand, I am just presenting my opinion on the subject in matter, my own view on the ufology age