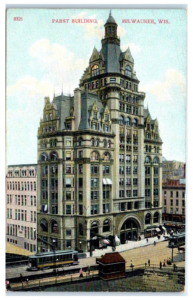 Pabst Building, Milwaukee, Wisconsin early 1900s – Really? Who had the skills to build this when we were riding in horse-drawn carriages and just getting into street cars? When was this building really erected?
The video below is another astonishing peek into our erased past that there is little evidence of. It’s like another world. Martin has shown us that there have been “resets” in the past when civilizations have been eradicated and rebuilt and we have no knowledge of it to speak of other than a few rare texts to document it.
If you’ve not explored our hidden past before, this will seem a little “out there”, but if you’ve looked into it even just a smidgen, this will probably resonate. Some of the historical texts Martin finds are mindblowing. He came highly recommended and I’ve enjoyed many of his presentations.
As Thomas Williams has said, the “tech” is all old. The controllers just suppressed it and kept it for themselves. None of it is new. Expand your horizons.  And don’t worry—Martin barely mentions flat earth/the globe. This is beyond all that and he has been researching long enough that he has a great deal of sound opinion to add for context. You are always free to form your own.
Yes, he talks a little funny, but you’ll get used to it. He also acknowledges the folks in the chat from time to time as it was recorded as a live presentation. Chances are though, it will really open your parachute. What has been withheld from us is simply stunning. Atlantis is just the tip of the iceberg.
The degree of control by other groups assuming supremacy on this planet is difficult to wrap your mind around the first time, but it serves to shed light on the current situation and the battle for dominance and freedom. We have been manipulated for eons and our awakening is long overdue.
Our problem is, history was rewritten and buried in mud floods and genocides, and we didn’t question what our eyes were telling us. We gave our power away, went on with our lives, living the lie, and ceased to question; seeming not to care that our history was stolen from us.
The truth is rather grotesque—but compelling, to say the least. We can learn from our mistakes.  ~ BP

Posts : 3442
Join date : 2017-02-15
It is written that the Queen of Sheba gave King Soloman a magic carpet for a wedding present. Looks like much of that we were told was a myth is most likely fact. I love Martin!