OUT OF MIND » THE INSANITY OF REALITY » POISON PLANET » We Have To Get Rid Of The 8.3bn Tons Of Plastic We Created Since 1950 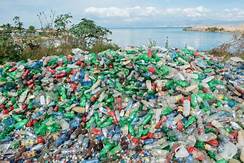 The human race stands on a mighty mountain of plastic waste that threatens to dwarf the Himalayan range. But unlike the mountains it has not stood alone but is living within our homes, clogging every water source, polluting the air to the point that we are being forced to wear masks, polluting our crops and finally ending up in our oceans – the most vulnerable part of the ecosystem. And worst of all they have silently ended up in our body as microparticles that have entered our system. We are basically consuming foods that have absorbed plastic, fish being a prime example.
And we are just beginning to understand and quantify the problem. Doing something concrete about it is still a long way off.
Inexpensive But Catastrophic
Plastic is versatile and inexpensive. That is the standard apology offered for its production. But that in no way compensates for it most vicious quality, it is non-biodegradable, it will be around forever. Its relatively low cost makes it easy to produce on a large scale and also discard it without recycling it. No wonder we can offer 5 grocery bags of waste plastic for every foot of ocean and promise to cumulatively offer 20 times that, a staggering 100 bags per foot of the world’s total coastline.
But What Goes Around Comes Around
We have been perplexed by the issue. The rich nations have chosen to just move them around, send them to a third world country. But they have ended up in the world’s oceans and the tides have a strange propensity to send an object back to its sender. We did not even bother to quantify the problem until recently. Only a couple of years back, Jenna R. Jambeck and Kara Lavender Law studied the life cycle of all plastics starting from the 1950s. The revelations were staggering and frightening.
High On Plastic
It revealed a worldwide ‘addiction’ to this material which has not been seen as such by any government. We are utterly dependent on the material and now, since we are in the last stages, we are drowning in it.
What Comes In Doesn’t Go Out

All we have done is that we have devised ways to ensure that it is removed from our immediate vicinity. But who is to remove them from the world altogether? From the 1950s when plastic production took off, 6.9 billion tons of the 9.2 produced have turned waste but 91% of that never reached a recycling bin. They have been dumped in landfills or incinerated or are just all around us. But a staggering proportion of that ends up in the ocean, around 8.8 million tons annually. And it is going to be there forever.
If You Don’t See It, It Isn’t There
The rich countries transport the plastic to a third world country and are smug in the belief that they have disposed of their share of the plastic. But the Asian countries are not on another planet. A large part of it ends up in the ocean and the tides spread them evenly from Hawaii to the Atlantic coast. And studies have strongly indicated that the tiniest of these particles end up on our plate, through the fish we consume.
A Geological Indicator
The Anthropocene era – the age of man is defined by our massive impact on the planet. And for a key geographical indicator, we have a lasting legacy, the tons of plastic that will define this era. And since plastic will last forever, this pointer will be around long after the human species become extinct as a clear, lasting beacon.
“Manufacturers have long chosen plastic for their products on the basis of price and functionality. But creating a more sustainable relationship with plastics will require a new dexterity on our part. It will require us to think about the entire life cycle of the products we create and use.” ― Susan Freinkel


What began as a miracle material in the mid-twentieth century has become an omnipotent one that refuses to go away even when disposed of. It was celebrated as liberating the American housewife from the drudgery of cleaning utensils, as saving wildlife as it as a reliable substitute for ivory. As we near the mark of 500 million tons of plastic produced every year, almost 40% of that remains instantly disposable as packaging material, mostly by the FMCG giants. But the worrying part is that the growth and usage of plastic production have outstripped the ability to get rid of it. And the rich countries of North America and Europe have to do more than just worry about their own waste. For it is a worldwide phenomenon. More than 50% of the mismanaged plastic waste is produced by 5 Asian countries. If there has to be a visible impact, the world needs to unite on this issue as it needs to on climate change.
IMAGE CREDIT: alphaspirit

Posts : 1826
Join date : 2012-02-15
Age : 66
Location : Ct
Ahhhhhhh plastic....The corporations around the globe use it to create larger profits and then put the onus on the masses to fix it. Perhaps a plastic tax would work. A deposit put on plastic bottles yielded quite a profit for the states. Less than 50% of plastic is actually turned in for a return. It goes in the trash. Does anyone else get the feeling that no government really cares? Maybe they know something we dont.

Admin
Posts : 106825
Join date : 2012-01-04
Location : Woodstock Nation
So very true... The planet and it's creatures don't have a chance while the parasite man is aboard.
But welcome BlumKram. Thanks for joining and commenting.

OUT OF MIND » THE INSANITY OF REALITY » POISON PLANET » We Have To Get Rid Of The 8.3bn Tons Of Plastic We Created Since 1950

» This is How We Clean 88,000 Tons of Plastic From the Ocean
» Kenyan Islander Builds Boat Out Of Flip Flops And 10 Tons Of Plastic
» Plastic rain: More than 1,000 tons of microplastic rain onto western US
» “Tons & Tons of Gold, N.E.S.A.R.A. and our GFL ‘Cosmic Sting’ Operation” Channeled through Michael Ellegion
» Huge Finds! 'Quadrillion Tons' of Diamonds Discovered, Sunken Ship With '200 Tons of Gold'